Traditional owners in South Australia have launched a complaint to the Australian Human Rights Commission over the federal government’s plans for a nuclear waste facility.

“Earlier this year, contractors of the Commonwealth caused significant harm and damage to an area that is particularly significant to traditional owners, and in particular female Adnyamathanha women,” she said. The complaint also alleges that a vote to determine support for a nuclear waste site excluded a large number of traditional owners.

“The complaint alleges that because a large number of traditional owners are not included in the vote, it is therefore discriminatory and unlawful,” Ms Lees said.

Earlier this year, Barngarla traditional owners launched a similar complaint alleging a community vote was discriminatory because it failed to include native title holders who didn’t reside in the community. “The department on this consultation has gone and spoken with other people in the region, other interest groups, they’ve never come out and spoken directly with us.”

“If only they’d come and talk to us, there could very well be a way forward.”

The Department of Industry, Innovation and Science, which is responsible for the National Radioactive Waste Management Facility project, said the government had consulted with traditional owners throughout the entire process.

“The Department’s process, run over several years, has included many meetings with ATLA and other local aboriginal groups. All members of the community who wish to have a say on the project have an opportunity to do so through our extensive and inclusive consultation processes," a spokesperson said.

“Our heritage assessment process has been independent, inclusive, transparent and robust and is well documented in the RPS report on our website.

“We are fully confident that there has been no permanent damage to any culturally significant sites or to any heritage aspects of Wallerberdina Station." 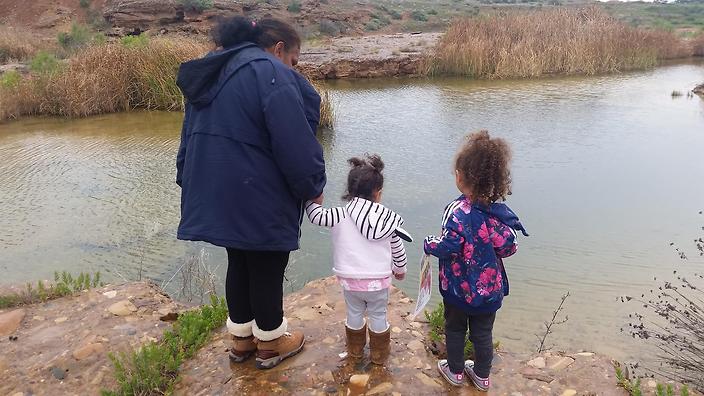 Community groups have opposed the construction of the plant in their region.
SBS News

Three South Australian sites have been short-listed to house Australia's low and medium level nuclear waste. Two are near Kimba, on the Eyre Peninsula. The third is near Hawker in the Flinders Ranges.

A planned community vote to determine support for the facility had to be postponed earlier this year after Barngarla traditional owners were granted an injunction by the South Australian Supreme Court.

This Barngarla matter will return to court in January.