Rawah couldn't find any novels representing her community, so she wrote her own

Rawah Arja wrote her own novel after realising her school students in Sydney's west didn't have books they could relate to. Now, it's been nominated for one of Australia's most prestigious literary awards. 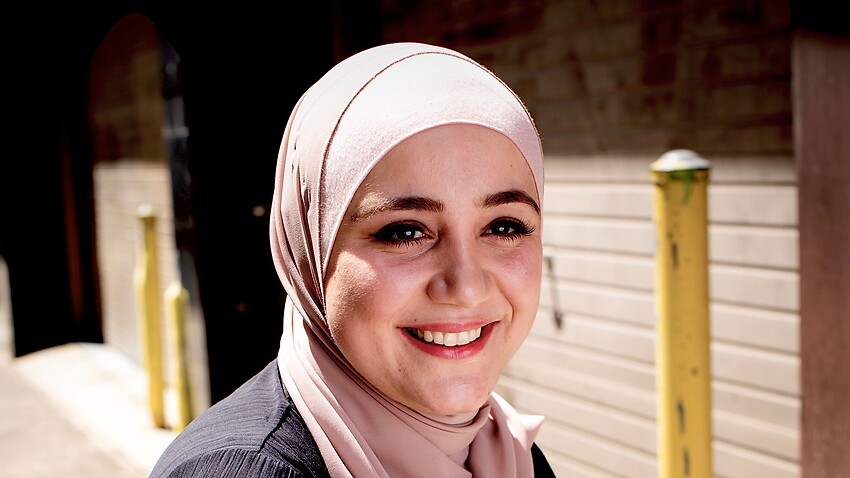 Rawah Arja spent ten years in classrooms across Western Sydney trying to encourage students to pick up a book and read - with varying degrees of success.

As a Lebanese-Muslim teacher born and raised in Punchbowl in Sydney’s south-west, Arja looked at young Australian literature available and realised representation of her community was lacking.

She felt helpless when her students ditched books for their iPads - until she decided to write her own novel to bridge the gap for disinterested young readers.

Her book follows young Lebanese boy Tariq, a student from Punchbowl High, who must play football alongside boys from Cronulla in Sydney's south while facing the complexity of his family’s culture and leadership in his social circles.

“I wrote the book for the young boys and girls to feel like they are worth something, that they matter. That even though life can go by, and they think they're not represented or that people don't care about them, that there's someone always keeping an eye out for them,” Arja told SBS News.

“I wanted to give them a safe space to say ‘hey, you know, us Arab Muslims aren’t always the bad guys.’ And I wanted for them to read a story from someone who looked and sounded like them.”

Growing up, Rawah Arja didn't think reading was for her - until she found stories that shared her experiences. Source: Supplied/Rawah Arja

Deep down, Arja knew she shared the same sentiments as the students she taught when she was their age.

She said she took a while to immerse herself in reading because there were no books that she could relate to.

“I always thought literature was only for white people, it was all I was accustomed to. That's all a high school ever gave me to read. I thought that was not my world. I can't be a part of it. I have to be at the back of the line,” she said.

“I always thought reading was boring, but it's not that. It was just that I couldn't find a book for me.”

She said her love for reading blossomed after reading two particular novels as a teenager.

The first, 'Looking for Alibrandi' by Melina Marchetta, follows the life of an Italian migrant teenager in Sydney. The second was Randa Abdel-Fattah’s 'Does My Head Look Big in This?', based on an Australian Muslim girl wearing a hijab for the first time.

“I couldn't believe that was out there, that literature could speak to me. Those two books helped me understand that I can actually get to the front of the line.

“Reading can feel really distant for the reluctant reader, it can make you feel like you're always at arm's length, but those two books brought you in.”

Arja’s experience of struggling to find relatable books for herself and her students isn’t an uncommon one, says chair of Diversity Arts Australia Debbie Lee.

“I think it starts when you’re a kid ... that you feel like you’re not represented. Certainly in books, I think there are many people who don’t feel like they’ve been represented,” she said.

“It's been an ongoing issue that people have been trying to address for a number of years, but there’s a strong focus on it at the moment.”

Ms Lee is optimistic that Australia’s arts industry is becoming more diverse after seeing artists from many different cultural backgrounds taking control of their narratives over the past decade.

“There is a demand now for people from diverse backgrounds to be telling stories, which is exciting to see … and it’s a global push,” she said.

“Things like the Black Lives Matter movement have escalated and put that pressure … it’s given momentum to a movement that already existed.”

The winners of the Prime Minister’s Literary Awards will be announced in December.

The judging panel said Arja’s characters “humanise people from marginalised communities who are not widely represented in young adult literature yet make up an important part of the cultural landscape of modern Australia".

All the shortlisted books showcased “the full range, vibrancy and depth of our literary culture,” a spokesperson for Arts Minister Paul Fletcher added.

While she would love to win, Arja said accolades are only important so long as they can inspire other young culturally and linguistically diverse people to follow in her footsteps.

“The reason why I care about being acknowledged is just so any person of colour can look and say, ‘Oh, okay, I can actually be nominated, because, she's been nominated before. That means it's not such a distant dream.’”