Refugee advocates say stories about Kurdish journalist Behrouz Boochani and the attempted deportation of the Biloela Tamil family would not have been made public if they did not have access to mobile phones in detention.

Proposed new laws that would give authorities the power to ban mobile phones from Australian immigration detention centres could be used to silence asylum seekers and make it harder to hold the government to account, lawyers and refugee advocates warn. "Mobile phones are a connection to loved ones, advocates and lawyers, but they also hold the guards accountable for their misconduct inside immigration detention," Mr Newhouse told SBS News.

"Without mobile phones, there were would be no transparency, and I have no doubt that you would see an increase in violence, human rights abuses and possibly even deaths in detention as a result."

In 2018, Mr Newhouse led a class action of about 80 asylum seekers and successfully overturned a previous ban on mobile phones in immigration facilities.

Dial it down, Dutton. Don’t take away asylum seekers’ phones! - Sign the Petition! https://t.co/D01p2xOWMq via @ChangeAUS

More than 35,000 people have signed the petition so far.

Without mobile phones, the group said Kurdish journalist Behrouz Boochani could not have written his award-winning book via WhatsApp and the Tamil family from Biloela would not have been able to capture footage of the government's attempt to deport them before a last-minute injunction was awarded.

"I have no doubt whatsoever that the Biloela family would be in Sri Lanka right if they did not have their mobile phones to record what was happening," Mr Newhouse said.

Mr Tudge has said the legislation would not amount to a "blanket ban" on all mobile phones in immigration detention.

Without Priya's mobile, Aussies would never have seen how Peter Dutton had guards drag her onto a plane in front of her little girls. Pls-tap https://t.co/FuzqTyCOJB, sign & share the National Justice Project's petition to stop Peter Dutton taking mobiles from people in detention pic.twitter.com/zbgI2PH6sM

"The Australian Border Force will have the discretion to be able to remove mobile phones when they know that they've been inappropriately used," he said.

"We've had instances where convicted child sex-offenders have been using their mobile phones inside the detention facilities to communicate with the parents of his victims, and that's absolutely disgraceful and yet the Australian Border Force officers have been unable to remove that mobile phone from that individual."

However, advocates say allowing Border Force to determine what constitutes appropriate phone usage would be placing too much power in the same hands.

Refugee Council of Australia CEO Paul Power said the level of accountability in immigration detention was already "completely unacceptable" and would only get worse if this legislation was passed.

"What we've got in effect is a system where the people who are choosing to keep people in detention and creating all the rules are the same group of bureaucrats from Border Force and Home Affairs enforcing them," he told SBS News.

At least 1,370 people are currently being detained in 10 immigration detention centres around Australia. 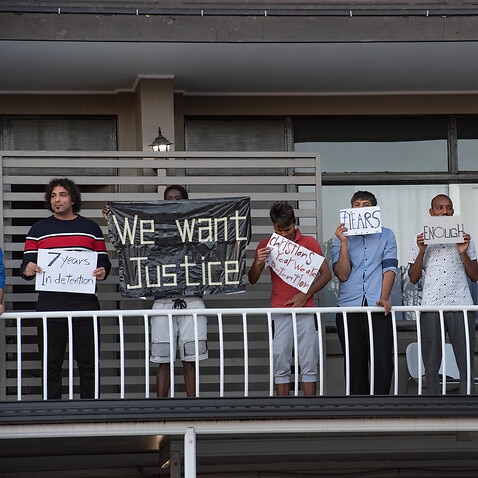 Mr Power called the legislation a government attempt to hide its "failure to act" despite warnings from national and international health bodies about potential COVID-19 outbreaks in detention facilities.

"This is the sort of thing we see again and again whenever there is any public pressure about detention - there's a political announcement made that really is an attempt to suggest to the public there's some grave risk that has to be managed in detention," he said.

"Immigration detention is administrative detention which is optional - it's for the purpose of status resolution - people are not there serving jail terms for any crime they've committed."

The government attempted to introduce similar legislation to increase Border Force's powers in September 2017, but was ultimately unsuccessful.