Hundreds have protested in Melbourne over the treatment of Muslim minorities in Myanmar, claiming that more than 3000 Rohingya have been killed in the violence.

Melbourne's Rohingya community has called on Australia and the United Nations to do more to end the violence in the Rakhine state of western Myanmar.

They claim the latest military crackdown was a smokescreen for ongoing attempts to clean out the entire population from Myanmar.

More than 3000 Rohingya are believed to have died in the violence and the UN High Commissioner for Refugees says that 270,000 have fled to Bangledesh in the past two weeks.

Abdul Majid from the Arkan Rohingyan Community of Australia said the situation was becoming increasingly desperate for the predominantly Muslim ethnic minority.

Mr Majid was one of those who feared for his family after they disappeared last week.

He said they were hiding from the Myanmar military in the jungle, but it wasn't safe for them to return to their homes.

"I am unable to support them, I am crying for them everyday. Other people are in a worse situation." Myanmar leader Aung San Suu Kyi was one of the main targets for the Melbourne protesters.

Mohamed Mohideen from the Islamic Council of Victoria called on Suu Kyi to act.

"She was the person who got the Nobel Peace Prize for standing up for the rights of humans," Mr Mohideen said.

"Here she is silent and she is not accepting that her government is responsible for this genocide."

Habib Rahman from the Australian Burmese Rohingya Organisation said it was time for the international community to take action against the Myanmar government.

"We call for restraint by the Myanmar authorities, for the protection of civilians, and for unfettered access to be granted to humanitarian workers," Ms Bishop said in a statement.

Ms Bishop said the government recognised the heavy burden placed on Bangladesh as a result of the conflict.

"Australia will provide up to $5 million to help respond to the crisis," she said.

He was among those calling for a special resettlement program for Rohingya forcibly displaced.

"This is an unfolding humanitarian catastrophe in our region," Mr Di Natale told SBS.

"We have a responsibility... to ensure that where those innocent people have nowhere else to go, that Australia offers them protection." 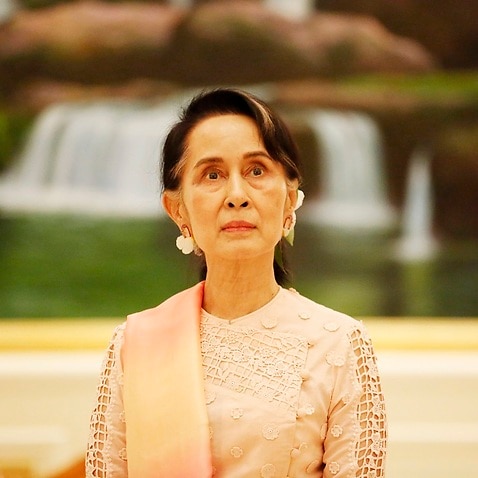