Experts say the controversial carbon capture and storage technology has yet to be proven at scale, and question marks remain over whether it can help drive down Australia’s emissions. 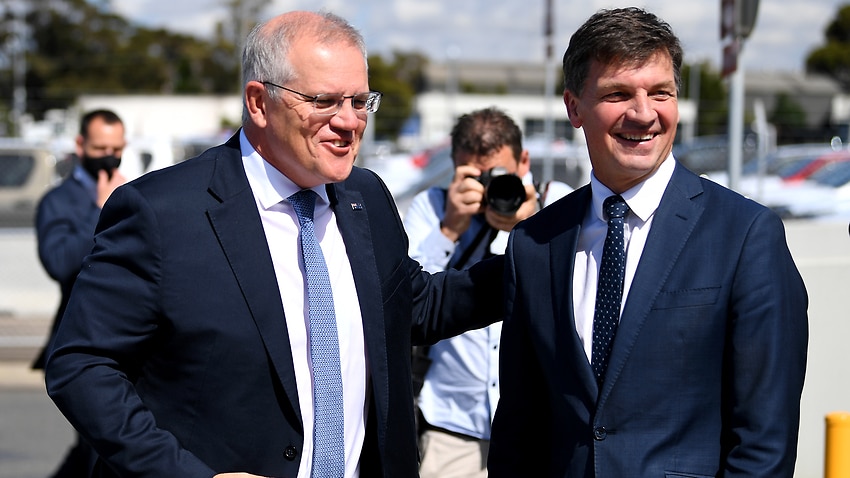 Prime Minister Scott Morrison and Minister for Energy Angus Taylor ahead of a tour of the Toyota Hydrogen Centre in Altona, Melbourne, 9 November, 2021. Source: AAP

Scott Morrison's government has been warned against relying on carbon capture and storage (CCS) technology, with one expert questioning the prime minister's new plan to invest in emerging technologies that have not been proven at scale to reach carbon neutrality.

The Coalition will inject $500 million into a new fund to overhaul the Clean Energy Finance Corporation to expand its remit to allow investment in CSS. The investment is expected to be matched by the private sector, taking the overall fund's value to $1 billion.

CCS is the process of trapping carbon dioxide and emissions released by industry so it does not affect the atmosphere, which includes storing it underground.

Professor Mark Howden of the ANU Climate Change Institute warned the controversial technology is unproven to work at scale, and further investment in the “expensive” and “energy” intensive process must be considered carefully.

“We need to take a very strong and hard look at this and evaluate it on its merits,” he told SBS News.

“The history of carbon capture and storage across the world is not that great - we have to be very convinced that we can improve where others have failed.”

The government says the new fund aims to drive investment in Australian companies developing low emissions technology. This includes the direct air capture and permanent storage of carbon dioxide underground, materials or techniques to reduce emissions in the production of steel and aluminium, soil carbon measurement, livestock feed technologies and improvements to solar panels and batteries.

The plan would see the fund’s money administered through the Clean Energy Finance Corporation (CEFC), which currently only invests in technologies such as solar, wind and battery storage.

To expand the CEFC's remit, the Coalition would have to introduce legislation before the next election, potentially setting up a political contest with Labor.

Labor has said it will consider the proposal, but its climate change spokesperson Chris Bowen has expressed scepticism about the government’s approach.

“I’m a pragmatist. If it can work, fine. I want fewer emissions in the air and I’m pragmatic and practical about how that’s achieved,” Mr Bowen told the ABC.

“[But] the government puts too much store in carbon capture and storage, [and] uses it as an excuse to avoid reducing emissions in other ways.

The opposition has previously opposed attempts from the government to allow the Australian Renewable Energy Agency to invest in technologies such as CSS and clean hydrogen.

Mr Morrison spoke at the Victorian Chamber of Commerce on Wednesday promoting what he’s described as a technology-focused approach to reducing emissions.

“For Australia to become a low emissions technology leader globally, we will need to continue to expand support for early-stage technology research, development and demonstration,” he said.

“This fund will address a gap in the Australian market where currently small complex technology-focused startups can be considered too risky to finance - so we'll step in.”

Labor leader Anthony Albanese accused Mr Morrison of embarking on a campaign of political "spin" amid the fallout of his attendance at the UN climate summit in Glasgow.

“The prime minister didn't take any of these policies to Glasgow because he knows they're all about spin and not about substance,” he told reporters.

Australia's climate policies were ranked last out of 64 countries and the country is among the worst offenders for emissions, renewables and energy use, according to a report released following the summit.

Mr Albanese also criticised the government for claiming the policy amounted to a $1 billion fund - that would be backed by $500 million in private sector investment.

“This is just an example of their spin,” he said.

Energy Minister Angus Taylor has described developing carbon capture and storage as a “priority technology” as part of its plan to reach net zero by 2050.

"Carbon capture and storage is a total scam and the public should not be paying for it,” he told reporters.

The government’s net zero plan includes the proposed investment of over $300 million to develop projects related to carbon capture and storage or use.

The use of CCS has also been criticised by mining magnate Andrew "Twiggy" Forrest as an unproven failure.