Tens of thousands of protesters have attended rallies across Australia in some of the largest ever demonstrations against racism in the country.

Tens of thousands of Australians have taken part in Black Lives Matter protests across the country, despite warnings from the prime minister and other health officials not to attend due to the risk of spreading coronavirus.

The rallies were held in solidarity with the US protests over the death of George Floyd, who died while being arrested in Minneapolis, and aimed to draw attention to the number of Aboriginal people who have died in custody in Australia.

At least 30,000 marched through city streets in Melbourne, Sydney, Brisbane, Adelaide and Hobart in peaceful demonstrations calling for an end to violence and racism against Indigenous Australians. 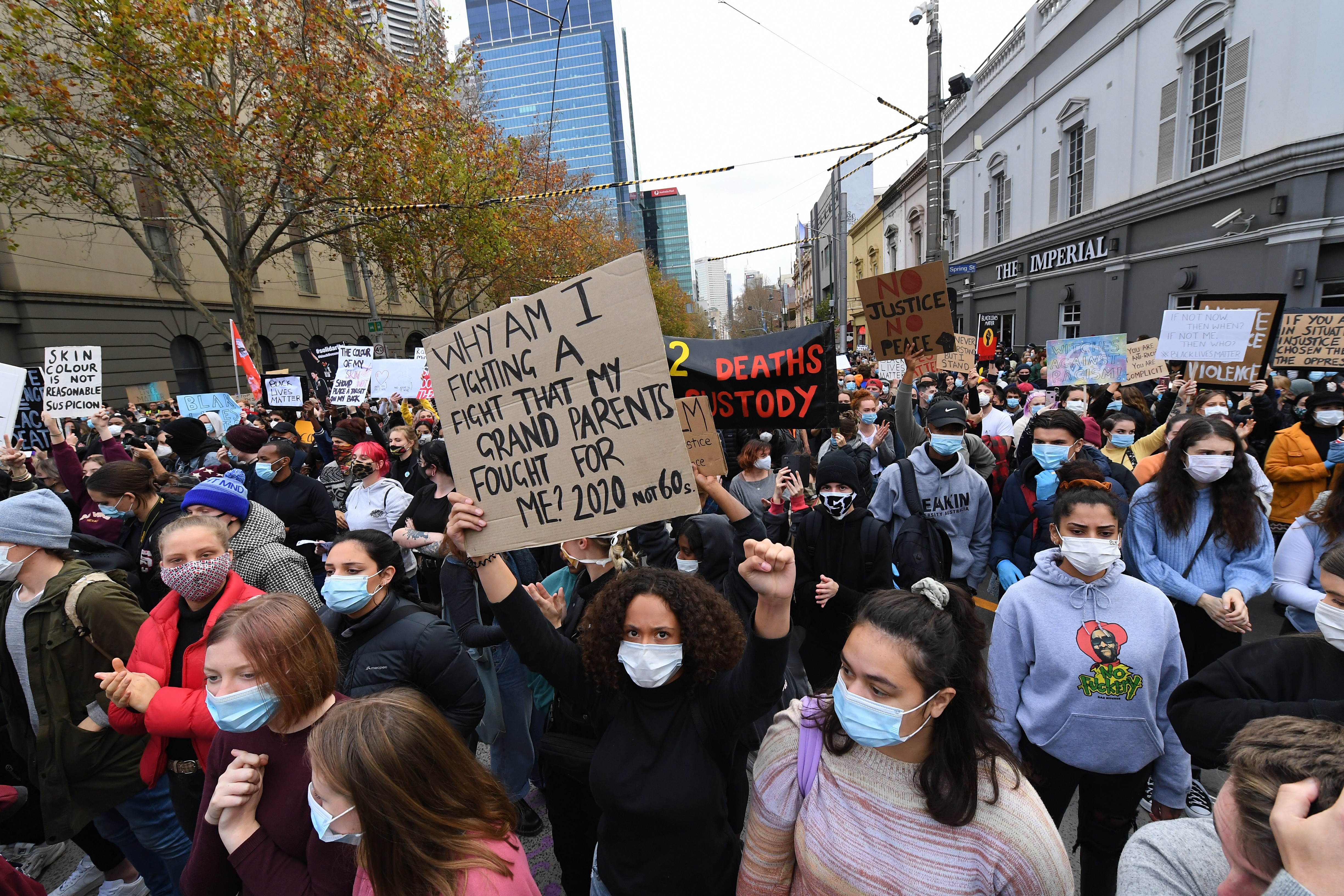 In Sydney, just minutes before the protest there was officially about to start at 3pm, the NSW Court of Appeal declared it an authorised public assembly, overturning a ruling from the NSW Supreme Court a night earlier that it should not go ahead on public health grounds.

The decision meant protesters - many hundreds of whom were already gathered for the start of the rally - could not be arrested for blocking roads.

Demonstrators cheered when the decision was handed down, with organisers declaring "the people have won".

More than 10,000 marched from Town Hall to Belmore Park, where they took a knee at 4:32pm to mark the 432 Indigenous deaths in custody since 1991 and chanted "black lives matter". At least 10,000 protesters also gathered in the heart of Melbourne where family members of Aboriginal women and men who have died while in police custody addressed the rally, sharing their pain and hope for a better future.

Wurundjeri leaders, whose native land is Melbourne, painted white ochre across their foreheads as a sign of mourning.

"We all bleed red because we are human," one speaker said to shouts of support from the crowd.

Aboriginal teenager Ky-ya Nicholson Ward told the thousands gathered it had been a hard week dealing with everything happening in the world, but a video of an Aboriginal boy being slammed face down to the ground by a NSW policeman, was particularly disturbing. 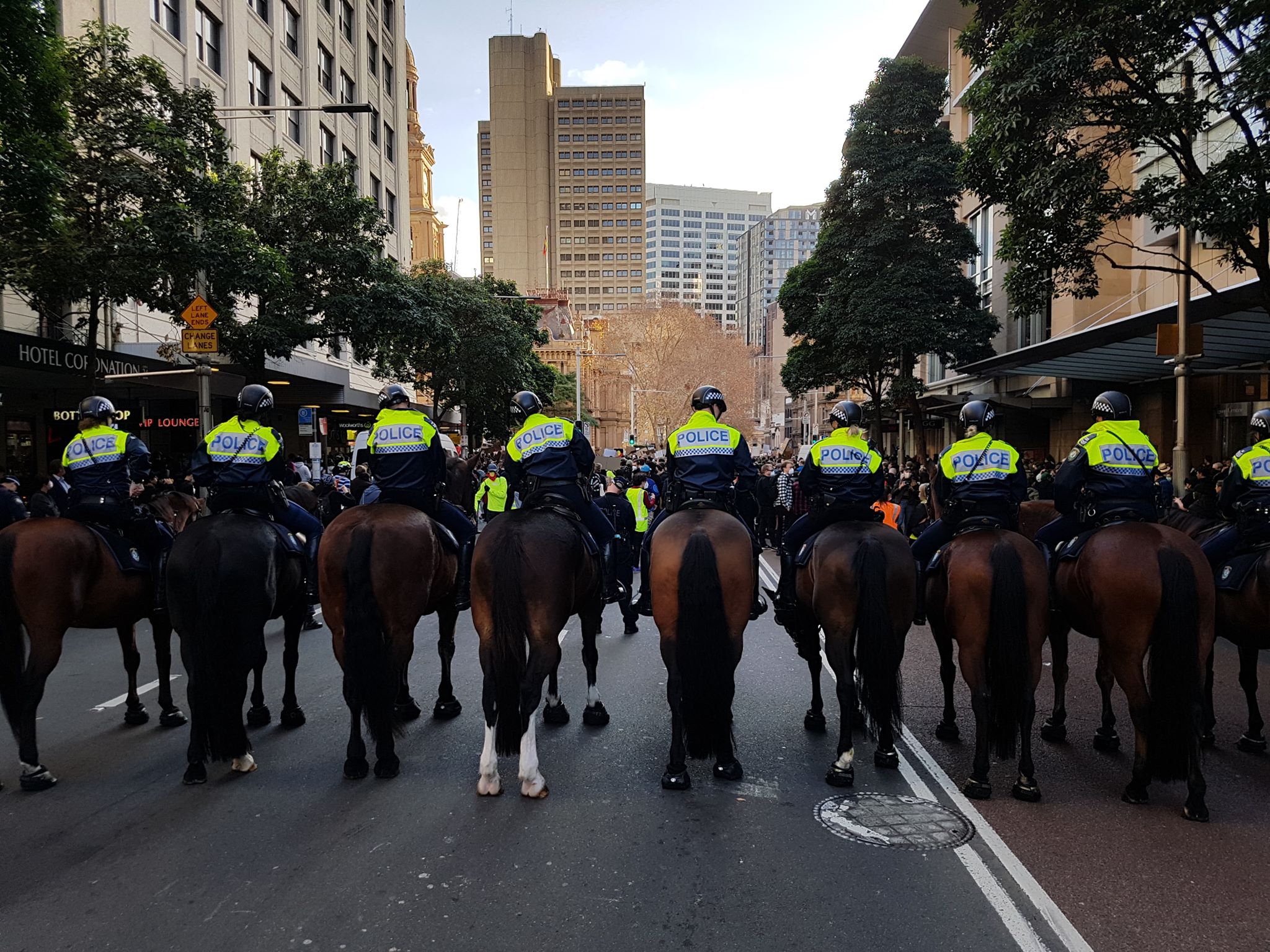 There is a strong police presence at the Black Lives Matter rally in Sydney.
SBS News: Nick Baker

Despite a strong police presence, including a helicopter flying overhead, the mood among protesters and police was peaceful.

Tahkara - "It's time for us to all unite together but an end to racism. And end deaths in custody in Australia, in the US, all over the world.
I've seen it happen to my friends. Black people get beaten in custody and nothing happens" #BlackLivesMatter Melbourne pic.twitter.com/6eaRvxwPtl

"If you're tired of hearing about racism, imagine how tired some people are of experiencing it," read a banner held by protester Codie Gilbert.

"Australia has its share of deaths [in custody] as well and it's important to do something," Ms Gilbert told SBS News. "It's not just a US problem, it happens here as well but we don't talk about it." 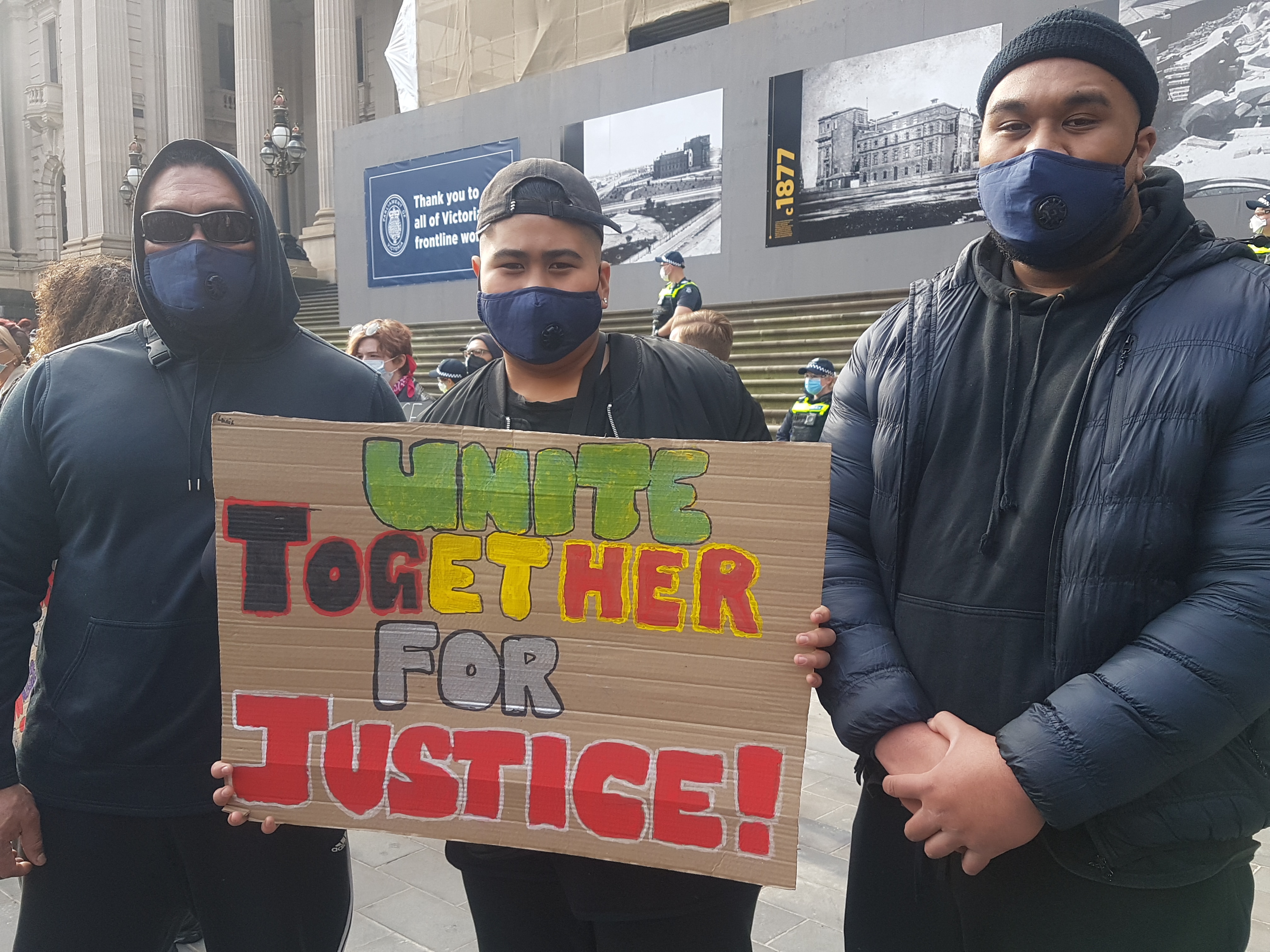 Jay, who didn't want to give his surname, was holding a placard that read: "unite together for justice!".

"It affects all of us. As a man of colour, I experience a lot of racism. We need to stand together and stand up for our brothers and sisters. You can't say it doesnt affect you because it affects all of us," he told SBS News.

Tahkara, who did not give her last name, said it was time for Australians to come together.

"It's time for us to all unite together to put an end to racism. And end deaths in custody in Australia, in the US and all over the world.

"I've seen it happen to my friends. Black people get beaten in custody and nothing happens, the media don't care and Australia doesn't care."

Authorities in Victoria had warned that protest organisers would face coronavirus fines if more than 20 people showed up.

'Coming together as people'

In Adelaide, protesters filled large parts of Victoria Square, after police gave special permission for the event to proceed despite COVID-19 restrictions.

Many of those attending wore masks and made some efforts to socially distance, though large groups appeared to be in close contact.

Speaker Jack Buckskin welcomed the large turnout, telling the gathering whether Aboriginal or non-Aboriginal, they were all part of the same society. "This is about us coming together as people," he said. "Today we stand united. Our movement happens with people.

"We want people to walk alongside us. This is what Aboriginal people have been asking for."

The rally and march through the city was watched by a large police presence after Commissioner Grant Stevens gave it his blessing on Friday.

"This is a unique and extraordinary event. There is a sentiment that suggests people should have a right to protest on significant matters," Mr Stevens said.

"We acknowledge that, and there is also the reality that with significant numbers of people attending, that the potential to prevent it occurring is also a very difficult challenge for police.

An estimated 10,000 people also gathered at King George Square in Brisbane for a peaceful rally.

Speakers, including elders and traditional owners, detailed police brutality against members of their own families.

"We rise together and we speak in one voice against racism ... and legislation that takes away our freedom in this country ... our right to have a voice, our right to be free," Wangan and Jagalingou man Adrian Burragubba said.

Cheers and applause echoed through the streets as he called for justice and government-funded trauma support for families whose loved ones die in custody.

"While our people are dying in custody, our voice has gotta become louder, become a roar," he said.

Aunty Alexandra Gater called for the royal commission against Aboriginal deaths in custody to be reopened.

"No policemen have ever been brought to justice. We've heard about all the issues," she told the crowd.

There have been at least 434 Aboriginal deaths in custody since the Royal Commission into the issue ended in 1991.

Border chaos expected as Queensland reopens to all except Victorians