Colleen Tighe Johnson says she harnesses the spirit of her ancestors through her work and is getting ready to launch her first commercial collection.

For Aboriginal fashion designer Colleen Tighe Johnson, the power to share stories of her ancient culture with the world is what motivates her to succeed.

The Gomeroi woman from northern NSW has made a name for herself as one of Australia’s most talented and sought-after Indigenous designers, despite never having sold any of her pieces on the commercial market.

After creating her brand Buluuy Mirrii (meaning 'black star') in 2010, the 58-year-old has garnered international recognition for her unique, eye-catching designs which have featured on catwalks in Melbourne and New York. “It’s about telling the stories of my Gomeroi nation and being able to showcase it to the world,” she tells SBS News.

It’s about telling the stories of my Gomeroi nation and being able to showcase it to the world.

Tighe Johnson most recently dressed three-times jiu-jitsu world champion and winner of the 2019 NAIDOC Sportsperson of the Year, Shantelle Thompson.

"The design she wore was about my community totem, yurrandaali, which means goanna," she says.

"She’s an absolutely beautiful person and her vision is a lot like mine - creating future pathways for the younger generations." Tighe Johnson works from her home in country Tamworth using artworks created by local Indigenous artists, many of them her relatives.

The models she hires for fashion shows and photo shoots are often selected from her Aboriginal youth development program, Miyay Mirrii, which she founded to help encourage teens to reach their potential.

Now after more than a decade of hard work, says she’s finally ready to take the next step in her career.

Tighe Johnson is preparing to debut a new haute couture collection, inspired by dream time stories of native honey bees, as part of the Queensland University of Technology’s Fashion360 showcase in August.

After that, she plans to put Buluuy Mirrii into production. 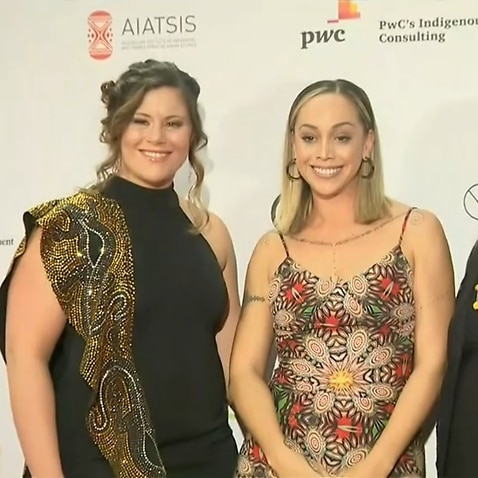 "I didn’t want to put a product out there that people didn’t understand, and now it’s time," she says.

"I know I’ve got to put a positive message out there and inspire other designers and young people that want to follow this pathway."

Tighe Johnson says her ultimate goal is to open an Indigenous-owned and run fashion house on Gomeroi land.

"That’s given me the initiative to keep moving forward and continue doing what I’m doing."