One Melbourne Victory fan, who identifies as queer, told The Feed they were ‘disgusted’ to see the statement handed out in leaflets at a recent game. 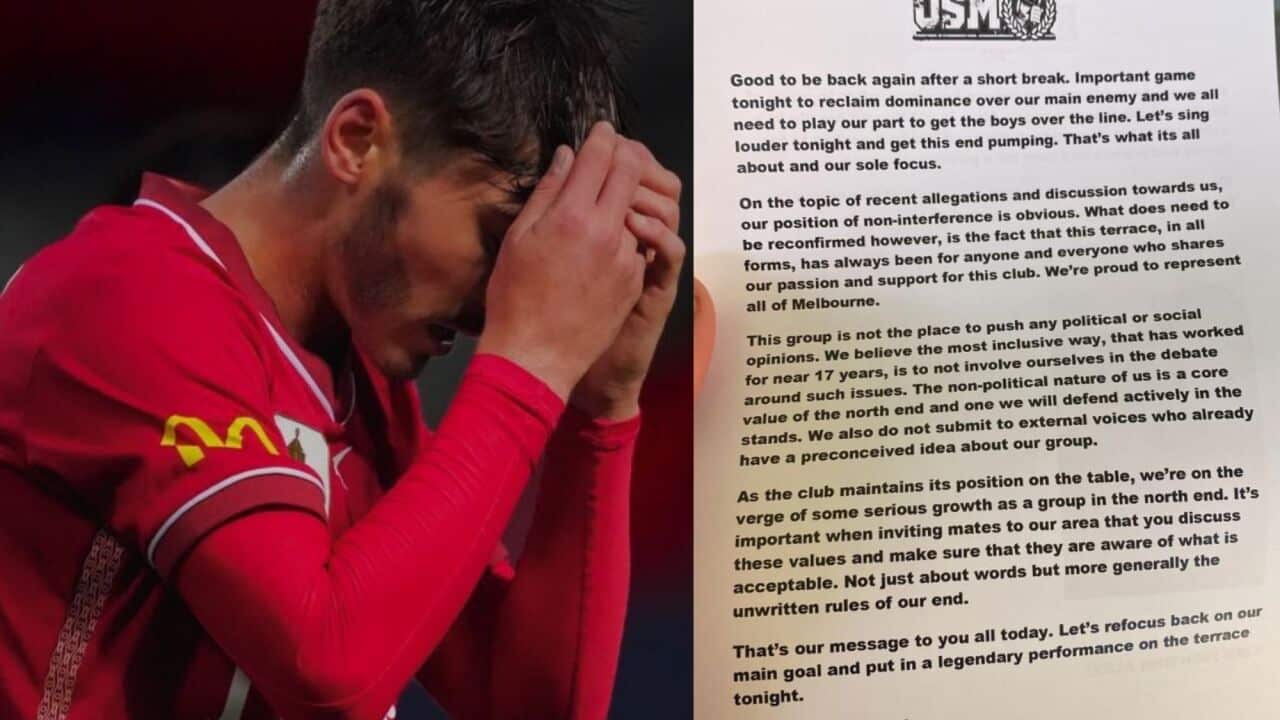 Tom (not his real name) was running late to Tuesday night’s game between Sydney FC and Melbourne Victory, when his friends sent him a photo of a leaflet they'd found on their seats in the stadium.

“My first reaction was ‘for f**ks sake’ it's disgusting,” he told The Feed.

The leaflet was released by Original Style Melbourne, an active fan base for the A-league side Melbourne Victory.

Advertisement
It is a response to recent calls for condemnation after Adelaide United defender Josh Cavallo, the only openly gay male professional footballer in the world, called out Melbourne Victory fans for hurling homophobic abuse at him during a game on January 8.

“On the topic of recent allegations and discussion towards us, our position of non-interference is obvious,” the statement read.

“This group is not the place to push any political or social opinions.

“We believe the most inclusive way…is to not involve ourselves in the debate around such issues.”

Tom, who’s been going to Melbourne Victory games for close to 20  years told The Feed the statement is blatant hypocrisy and doesn’t align with the majority of fans.

“They’re saying the terrace [the fans section behind the northern end of the field] is an open and accepting space but refuse to condemn homophobic abuse.”

Tom told The Feed Josh Cavallo’s coming out inspired him to come out to people in his broader social circle.

“It’s hard for me because I’ve always heard homophobic chants at football games, but I received a lot of support from my social network when I did come out.”

The Feed reached out to OSM for comment but received no response in time of publishing.

On Wednesday Football Australia issued Melbourne Victory with a $5,000 fine for the homophobic abuse some of their fans yelled at Josh Cavallo during an A-League match at AAMII Park on January 8.

A statement from Football Australia said the money will be used to further invest in LGBTQIA+ awareness and education initiatives in football.

It also said that in deciding on an amount for the fine it took into consideration a number of measures taken by the club in response to the allegations.

Including “the club’s prompt statement denouncing the incident”.

And “the club’s commitment to work with its supporters to take additional steps to educate other fans about diversity and inclusion”.

The Feed asked Football Australia for further reasoning on the amount of the fine but did not hear back in time of publishing.

James Cardell, the president of Pride in Football Australia, a group that promotes participation in football within the LGBTQIA+ community, told The Feed that a $5,000 fine is a “drop in the ocean” for a club as big as Melbourne Victory.

“I know that Football Australia is using the money for a good cause, but it is a very small amount,” he said.

“I appreciate that they are taking action on this issue, when five or six years ago they might not, so there definitely is progress.”

On the leaflets that were handed out at the game last night James said, “it’s pretty archaic.”

“If you don’t stand up against homophobia then you are complicit,” he said.

A spokesperson for Melbourne Victory told The Feed they are not commenting on the leaflets released by the fan group.

They said the club “maintains a strong stance on condemning the homophobic abuse that occured on January 8.”

“The club is committed to not only fulfilling Football Australia’s measures but taking its own measures to promote LGBTQIA+ awareness and making Melbourne Victory’s match days an inclusive environment for everyone,” the spokesperson said.

Another fan in the stadium on Tuesday night was Andy Gargett. He told The Feed he was shocked to find a leaflet on his seat.

“There would have been about 3000 of them [leaflets] in the northern terrace,” he told The Feed.

Andy told The Feed he is disappointed such a big fan group would choose to take a non-interference approach.

“Regardless of who was hurling abuse at Josh, we as Victory fans should all be standing in solidarity against homophobia, there is no room for it in the sport,” the season-ticket holder said.

“From the discourse I’ve read online there seems to be a lot of condemnation from Victory fans, about this statement, it certainly doesn’t represent me and my beliefs.”