This year a replica of Captain Cook’s ship, the Endeavour, will circumnavigate Australia to mark the 250th anniversary of Cook’s arrival. Meanwhile, the first Australian to circumnavigate the country is left behind.

In 2020, to mark the 250th anniversary of Captain Cook's arrival in Australia, a replica of the Endeavour will sail around the country.

The government's decision to allocate $6.7 million to the journey has been criticised in part because Cook never circumnavigated Australia -- the first person typically credited with doing so was Matthew Flinders. 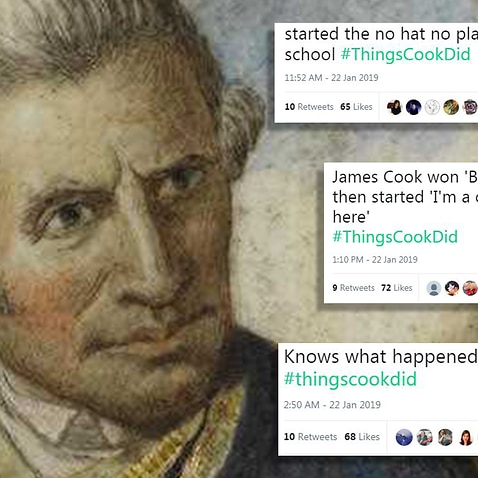 A lesser-known fact is that an Indigenous Australian was also on board for that first circumnavigation. His name was Bungaree, and he played a key role in the journey, overcoming language barriers to interpret for and negotiate with other Indigenous people the crew encountered on their way.

On NITV's The Point this week, co-host John Paul Janke questioned why resources are being poured into a recreation of a journey Captain Cook never made, while the legacy of the first Australian to actually circumnavigate the country is forgotten.

"Matthew Flinders was first, he was British. But there was an Aboriginal guy on the boat with Flinders -- Bungaree, who comes from Sydney, from Broken Bay," Janke said. "So he should be celebrated as the first Australian to circumnavigate this country."

@hughriminton Great to yarn today. Here's King Bungaree, who i was talking about today. He was the first person from this country to circumnavigate the continent with Flinders from 1802 to 1803. There are no statues of Bungaree in this country. Flinders cat Trim has more statues. pic.twitter.com/fCxtvJpEmB

There's more statues of that cat than there are of Bungaree, who was the first person born on this continent to circumnavigate this country.

"So is the 250th anniversary of Cook the opportunity for us to say 'this is the real history of this country'?"

The Point panellist and former politician Nova Peris expressed a different view, pointing out that the replica journey risks further obscuring the real history of this country.

"You know, we also know how much it's going to cost to send this boat around this country," Peris said.

"And again, are we spreading more lies? Influencing the minds of our future generations? To tell them a narrative of 'this is what's happened', when actually and factually it didn't happen?"

“You don’t lose your history, you gain our history.” Nova Peris talks Identity on The Point. #AlwaysWasAlwaysWillBe pic.twitter.com/xDYHIGcjie

Bungaree's voyage, on the other hand, did happen, and there's plenty more to his story. Bungaree was the first person recorded in print as an Australian, and was famous during his life as a flamboyant figure who wandered Sydney in a red military uniform greeting new arrivals to the colony and mimicking the governors. He was often referred to as King Bungaree.

Catch The Point on NITV at 8:30pm Wednesdays, or catch up on SBS On Demand.