Drag culture has gone mainstream and it’s giving a whole new generation of pint sized Australians performers a way to express themselves. But it’s got some people concerned this isn’t just child’s play - it’s dangerous.

SEE BRIERLEY'S STORY IN FULL WHEN THE FEED RETURNS

The first time Brierley Smith performed as a drag queen was last year when he was ten years old.

Brierley, a softly spoken and sensitive boy, shows off the costume he wore as his drag queen persona, Pink Sasss.

It’s a sequined leotard with tails - a hand me down from his older sister - which his Mum, Cath Smith, has customised around the groin. The glittery ensemble includes pink jazz heels and is topped off with a Dolly Parton-esq pink wig.

To say Brierley is obsessed with the colour pink is an understatement.

“It took us a long time to come up with the name Pink Sasss,” he explains.

“I always wanted the name Pink for starters because pink is my favourite colour, baby pink to be exact.”

Brierley’s sister, Zenya did hair and makeup and choreographed the performance. But the adult audience loved Pink Sasss’ performance, cheering and clapping as she swung her hips, whipped her hair and dropped to the ground.

AUSSIE DRAG NOT JUST FOR ADULTS

Across Australia more and more children are dressing - and to a lesser extent performing - in drag which up until recently was considered adult entertainment.

Many take their cue from eleven year old US drag kid Desmond is Amazing.

Desmond found fame after a video of him voguing down the streets of New York, during its Pride Parade, went viral three years ago. He's since been featured in Vogue magazine and has walked at New York Fashion Week.

Drag icon RuPaul has heralded Desmond as the 'future of America' and RuPaul knows a thing or two about drag culture.

With a growing younger audience drag queens are diversifying their repertoire - including reading books to children at public libraries.

Called Drag Storytime, it was popularised in New York and has since been sprouting in the UK and here in Australia. Being a drag kid in Trump's America

On a rainy Thursday morning in Sydney's inner west a playgroup is gathering around local Drag Queen Maxie Shield, ready to hear a story.

"I've seen it in movies, like Priscilla Queen of the Desert, but I haven't seen one in real life before. She's very beautiful," says a young girl attending.

"I think the kids are a bit more smarter than most of the club audience," she laughs.

Her humour gives way to reveal the real reason she's here: "I think this is more important."

Today's event is being organised by Jolene Evans for Rainbow Families - a support group for gay and lesbian parents.

If we can change the world's idea about gender and it doesn't have to be one or the other the world would be a nicer place.

Jolene's ultimate goal is to reach all families.

"The people I'd like to get out further to are families with mums and dads - families whose children don't really see this sort of thing every day."

But not everyone is on board.

The news that drag queen Roxee Horror would be hosting a Drag Storytime event at the Wollongong City Library last year was met with fierce opposition. 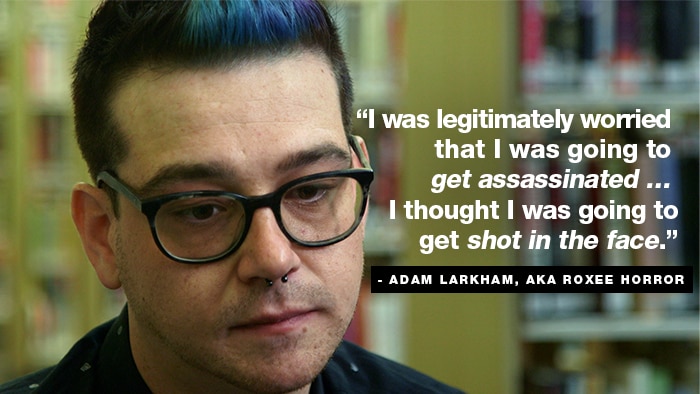 Earlier this month, a man carrying a gun entered a Drag Storytime event in the US state of Texas and refused to leave. He was detained, disarmed and escorted out by police.

The small community event during a month long Queer Arts Festival in Wollongong became the the target of mass online vitriol when Mark Latham shared the event on his Facebook page. 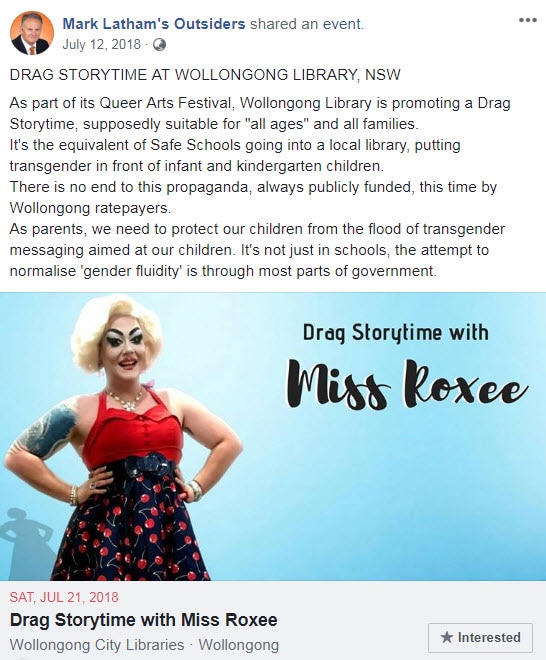 "I'd die before I ever exposed my kids to this filth!" wrote one comment.

"Keep your preverted [sic] sick confused life style away from our children," says another.

"I just had to say look - chill out guys, just relax, life does go on and let's enjoy the experience," he says sitting in his office above the library.

"I live in a multicultural community. There are a diversity of views from very conservative views about family, marriage, relationships and so on ... I also have to be conscious of the fact that there are people who have more diverse views."

The council decided to go ahead with the event and increased security in case any of the online threats eventuated. Over 300 people attended.

At the heart of this debate is how young is too young to learn about gender identity or in the words of the Prime Minister, Scott Morrison, letting "kids be kids".

She doesn't have a problem with little boys playing dress ups but believes there's a difference between "a child dressing up as a cowgirl or a fairy at pre school and then being paraded in front of adults as a drag queen - you couldn't have two more different concepts."

Wendy says people are justified to be concerned at what she says is adults pushing drag culture onto children.

She worries teaching gender theory to kids is leading to increased gender dysphoria.

What we're promoting here is something that's very radical and not scientific...And to confuse children at a young age about their gender is actually setting them up for a really incredible fall.

"Brierley spends a lot of time with the Drag Queens...they never ever talk about, 'oh you know you need to be a girl' or anything like that."

Brierley is quick to point out that he doesn't wish that he was Pink Sasss all the time but that dressing as Pink Sasss allows him to explore a part of his personality he may not otherwise be able to.

"That part of me that she is, is like my confidence and my being girlie and if you take that part away from me I'm sort of, like, more bland and wouldn't talk to people normally."

Dr Elizabeth Riley, a children's gender counsellor, says allowing children to dress as and interact with drag queens might actually help them explore their identity.

"Children need to be allowed to be themself and ironically that's exactly what Scott Morrison said."

Young boys feel desperately the need to break out of the strait jacket that they've been put in to for a really long time.

Perhaps performance dressing is one of those ways they do that in this kind of strict male culture that we have in Australia which I think is quite cruel to little boys."

Dr Riley concedes there may be a need to coin a new term for children who dress in drag in order to distinguish it from the more sexualised adult scene. So far, Brierley has only told one friend at school about Pink Sasss because he's worried he'll be called "gay" and teased.

But he isn't deterred.

"When I'm Pink Sasss it feels like a little piece of me just clicked into the puzzle."

SEE BRIERLEY'S STORY IN FULL WHEN THE FEED RETURNS