Serbian tennis player, Novak Djokovic, has been ridiculed over claims he wrote a list of six hotel quarantine requests ahead of the Australian Open tournament.

The world’s number one tennis player, Novak Djokovic, is under fire following claims he authored a list of six proposals to improve hotel quarantine conditions for those competing in the Australian Open.

- Fitness and training material in all rooms

- Decent food, according to the level of the tournament and from an elite athlete

- Reduce the days of isolation for the isolated players, carrying out more tests that confirm that all are negative

- Permission to visit your coach or physical trainer, as long as both have passed the PCR (tests)

- If the previous proposal has the green light, that both the player and coach are on the same floor of the hotel Sports journalist,  Richard Hinds, tweeted: “As much as we all love a shirtless nightclub conga line, not sure I'm entirely comfortable with No-vacs Djokovic providing public health advice during a pandemic.”

While another user joked: “more like novax djokovic ammirite?” 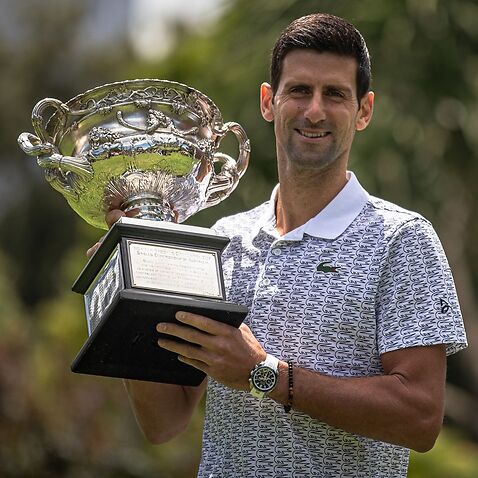 Novak Djokvoic is ‘opposed’ to vaccination

Djokovic raised eyebrows in April last year when he said he was “opposed to vaccination” before contracting COVID-19 in a random twist of fate just months later.

The world number one tested positive to the virus after partying with his physical trainer and other players during the Adria Tour exhibition tournament in the Balkan regions.

At the time, Australian tennis player Nick Kyrgios responded to footage of Djokovic partying, tweeting: “Don’t @ me for anything I’ve done that has been ‘irresponsible’ or classified as ‘stupidity’ - this takes the cake.”

Prayers up to all the players that have contracted Covid - 19. Don’t @ me for anything I’ve done that has been ‘irresponsible’ or classified as ‘stupidity’ - this takes the cake. https://t.co/lVligELgID

Djokovic’s hotel quarantine requests drew a swift rebuke from COVID-19 Quarantine Victoria Commissioner Emma Cassar, who told 3AW: "It's a firm NO from me".

Victorian Premier Daniel Andrews also chimed in this morning, stating: “The rules apply to them as they apply to everybody else and they were all briefed on that before they came ... There's no special treatment here.”

Ms Cassar has also claimed some players had committed "low level, but dangerous acts", such as opening their doors and trying to talk to teammates in the hotel.

She reminded players they could be issued fines of $20,000 or transferred to stricter hotels with police guards for breaching quarantine rules.

CQV Commissioner Emma Cassar's answer to the Djokovic list of request for players: "It's a firm NO from me"..
Tells @3AWNeilMitchell on @3AW693 that there will be NO change, no modifications to the quarantine rules - it's 14 days. It's stay in your rooms.

Ms Cassar’s warning comes as 72 tennis players are now self-isolating after a fifth case of coronavirus from a passenger onboard a third flight into Melbourne.

Tennis players who’ve lamented on social media about having to undergo mandatory hotel quarantine and complained about the food served have failed to gain sympathy from the Australian public.

Russian world No.28 Putintseva wrote on Twitter: "What I don't understand is that, why no one ever told us, if one person on board is positive the whole plane need to be isolated. I would think twice before coming here".

While Romanian world No.71 Cirstea replied to Putintseva: "if they told us this rule before I would not play Australia. I would have stayed home. They told us we would … be a close contact only if my team or cohort [those sitting close by on a flight] tests positive".

Players complaining about their lunches and then there’s Benoit... pic.twitter.com/G25p7AvBYu

Other players, including Spain’s Pablo Carreno Busta, appeared to snub the food on offer, with the player posting a photo of his lunch on Instagram and writing: “really?”.

But others such as Stan Wawrinka posted more positive messages in support of Australia’s quarantine rules. Wawrinka uploaded an image of himself in hotel quarantine with the hashtags #day1 #happytobehere #grateful #readytowork.

In a bizarre post that drew widespread criticism, Wawrinka was lambasted and labelled a “flog” by Liberal MP Tim Smith.

tennis star Stan Wawrinka is no doubt quite intrigued in how he's been drawn into a local Australian political fight by VIC opposition MP Tim Smith unprompted calling him a "flog" pic.twitter.com/KnZAfccQFv

Many were quick to point out that Wawrinka had not complained about the hotel quarantine system and instead, had clearly stated he was grateful to be here.

Journalist JR Hennessy tweeted: “Point scoring on the Australian Open is just about the easiest political win in the country right now, and you’ve somehow fumbled it. Very impressive.”

While reporter Josh Butler tweeted: “He says he’s ‘happy to be here’ and ‘grateful’. Which bit specifically makes him a ‘flog’?