Right now, the majority of Australia's bushfire firefighters are volunteers. But as climate change worsens, former fire chiefs have warned that those volunteers' jobs could become harder to do.

As Australia's bushfire seasons continue to intensify under climate change, we're hearing more and more about the tens of thousands of volunteer firefighters fighting to protect homes and communities.

This raises an interesting question: why are our bushfire defences mostly run by volunteers?

In a country as bushfire-prone as Australia, shouldn't we expect that the emergency services personnel risking their lives to defend us from threat are paid?

Anyone know the history behind the RFS being entirely volunteer-staffed? Seems weird in a country this prone to bushfires we have salaried metropolitan fire brigades, but rely on solely on volunteers in the country?

You might be tempted to think that the situation is clear-cut: a lack of government funding for services in rural areas. But the reality, as it turns out, is complicated -- it involves the size of our country, the history of volunteer firefighting, and the unpredictable nature of bushfires.

In fact, a number of former fire service chiefs told The Feed that relying on huge reserves of volunteers is the best way to fight bushfires. Here's why.

How do you fight a bushfire?

According to Stuart Ellis, a former Chief Officer of the Country Fire Service in South Australia, there are two main reasons why the majority of Australia's bushfire firefighters are volunteers.

For one, even as fire seasons intensify, the need for firefighters at any one time will vary across Australia. It's difficult to predict when and where the largest bushfires will be -- even once fires start, a shift in wind direction can rapidly change things.

"When volunteers are required, they need to be present in significant numbers and often close to the areas where the fires will occur," Ellis explained to The Feed.

"They bring with them local knowledge and familiarity and expertise in the local fuels, weather conditions and topography." "To pay firefighters to be present in the numbers necessary and in the places necessary to give quick response to bushfires across country Australia is a significant challenge, particularly when these fires are prolonged and frequent."

"This is unlike full-time firefighters in urban environments, where the threat to property exists year-round -- mainly for house and other building fires, but also for hazardous material and rescue incidents."

In short, volunteer fire services are similar to other volunteer emergency services like the SES -- in times of emergency, there's always a need for a surge of extra hands on deck.

"Australia would be unable to manage the largest fire events without the surge capacity volunteers represent," Ellis said.

The second reason so many bushfire firefighters are volunteers has to do with the history of volunteer firefighting in Australia.

Every Australian state has both volunteer and paid firefighters, and in many states those two groups form separate organisations.

In New South Wales, there are two fire services. Fire and Rescue NSW, staffed by close to 7,000 paid firefighters, handles metropolitan areas, with 335 fire stations in cities and towns across the state.

The RFS is currently the world's largest volunteer fire service, with more than 70,000 volunteers (plus around 900 paid staff). It started, however, with a series of small, community-based fire brigades, beginning with the first volunteer bush fire brigade in Berrigan in 1896. Over time, independent community-based brigades became more and more connected, as the government passed laws to provide legal protections and standardise equipment and training. But it was only pretty recently, in 1997, that the Rural Fire Service we know today was officially created.

Today, the RFS is made up of more than 2,000 local brigades. That strong local connection remains important, according to Ellis.

"Australia has a strong history of volunteerism, and many of the volunteers involved in bushfire firefighting are members of the community protecting their neighbours, their property and their livelihoods," he told The Feed.

"Volunteers take great pride in providing their support for the benefit of the community."

"Most of the volunteers back then would say 'we're doing it for our community, we're not doing it for the pay'," he told The Feed. 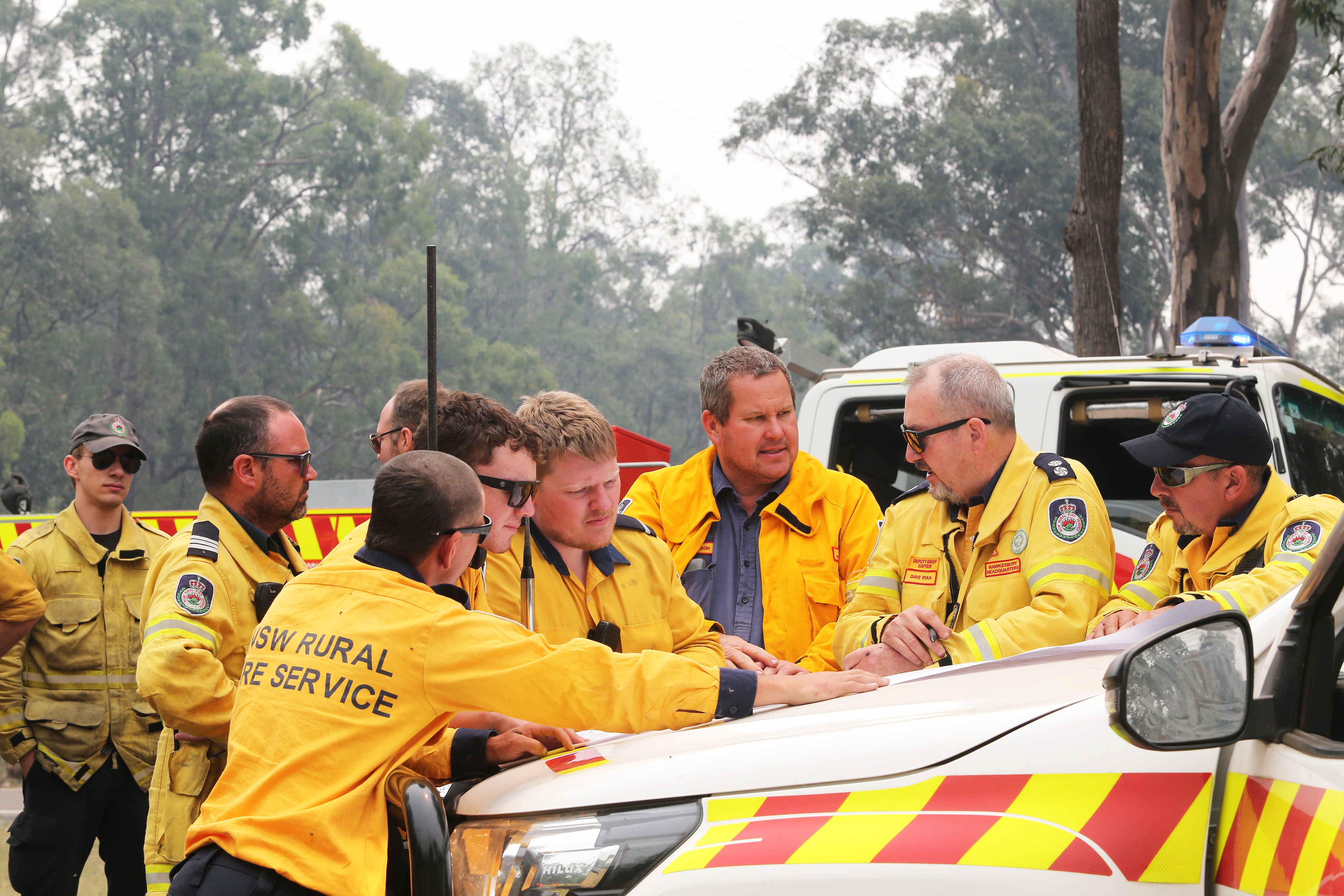 "They are similar in some ways -- they are there to save lives and property, and they will put their own lives on the line for people they have never met -- but volunteers are very much community-based."

Okay, but is the government putting enough funding towards bushfire defences?

According to the former fire chiefs who spoke to The Feed, relying on large numbers of volunteers to fight bushfires is not necessarily a sign of inadequate funding.

Still, experts agree that there is more the government needs to do to support bushfire protection services, volunteers included.

Last week a coalition of 23 former fire and emergency service leaders called on the government to declare a climate emergency and commit to investing in more water-bombing aircraft and firefighting resources. "The fundamental fact is that as temperatures go up -- and I'm talking about climate change here -- it's really pushing our volunteers' ability to do the task they're there to do," Bibby told The Feed.

"Disasters are becoming bigger and lasting longer, and starting earlier and finishing later in the year. One benefit is we have a very large volunteer population so we can actually rest people, but we're coming to the tipping point where the ability to rest people and the ability to do the job the volunteers do is diminishing," he said.

There's always more money that can go towards fire trucks. But there needs to be a larger amount of money now going into fire prevention.

"We need to embrace technology that will make volunteers' lives easier."

Bibby suggested increasing funding to the Bushfire and Natural Hazards Cooperative Research Centre, increasing research and funding for backburning, and considering compensation for employers of volunteer firefighters to incentivise them to let volunteers leave work and fight fires.

He also urged more young people to sign up to volunteer, saying that increasing volunteer reserves is crucial to prevent volunteer burnout over a long fire season.

The Feed reached out to the NSW RFS and federal Minister for Natural Disaster and Emergency Management David Littleproud, but did not receive a response by time of publication.

If you're a volunteer firefighter and you'd like to share your experience with The Feed, get in touch at sam.langford@sbs.com.au.