Hate crimes targeting Muslims and Jews have increased during Donald Trump’s rise to power. But is he really to blame?

It was a Friday afternoon, just before rush hour, when two teenage girls boarded a packed train in Portland, Oregon. One of them was wearing a hijab.

“Get off the bus (sic) and get out of the country because you don't pay taxes here,” yelled fellow passenger Jeremy Joseph Christian, according to an eyewitness.

Christian continued to hurl abuse at the pair, calling Muslims “criminals”, before three men stepped in. For two of them, the decision would prove fatal. 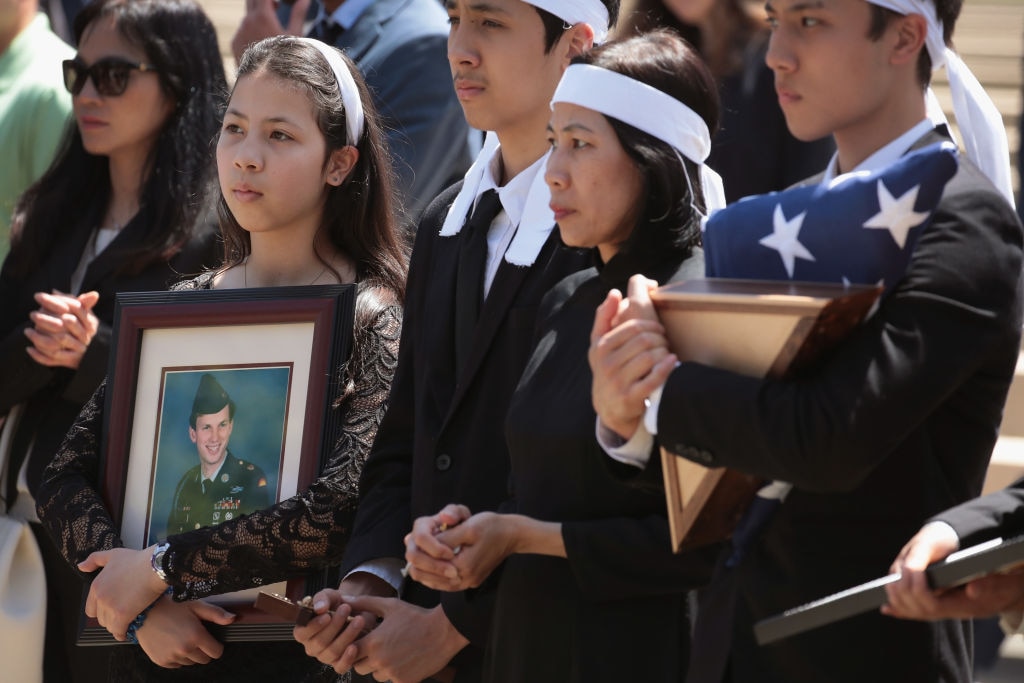 Christian, a 35-year-old who had previously attended free-speech rallies and shouted “die Muslims” and “die Jews”, pulled a knife.

The 26 May attack was one of the most high profile hate incidents of 2017 in the United States, but it would soon be overshadowed. In August, a ‘Unite the Right’ rally in downtown Charlottesville, Virginia, made headlines around the world. 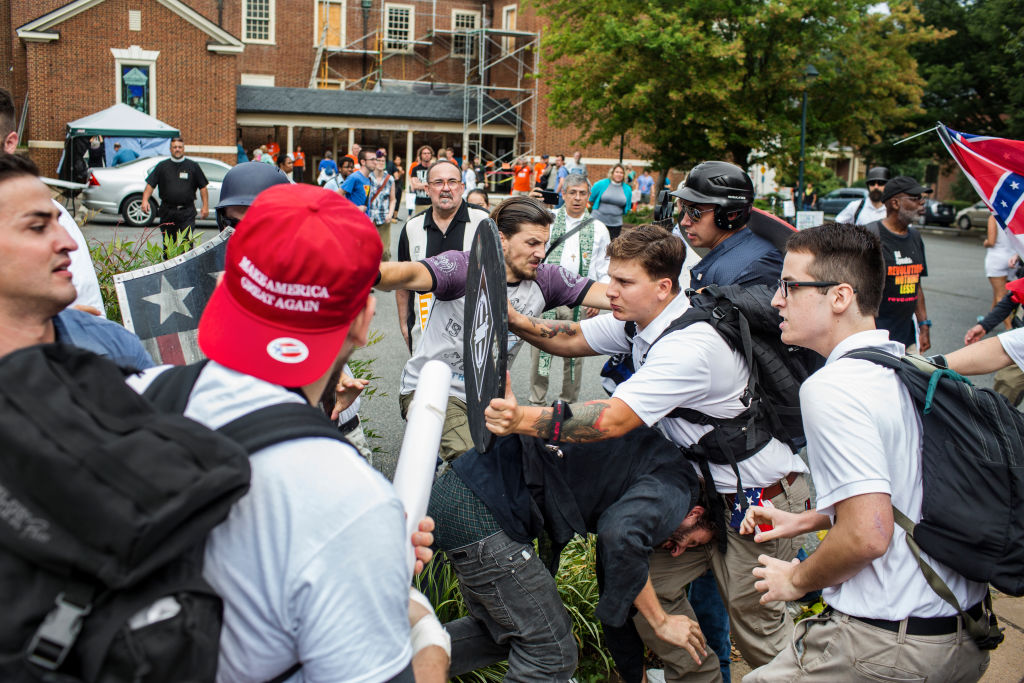 Violent clashes erupt at the 'Unite the Right' rally in Charlottesville on 12 August 2017.
Jason Andrew/Getty Images

Carrying Nazi flags and chanting “Jews will not replace us”, hundreds of white nationalists descended on the university town to protest against the removal of a statue. The local council, and its Jewish mayor, had decided Confederate icon General Robert E Lee – an American Civil War general who supported slavery – should no longer be celebrated.

The following day, 20-year-old suspected extremist James Alex Fields drove a car into a crowd of anti-racism campaigners who had gathered in response to the protests, killing 32-year-old Heather Heyer.

Muslim and Jewish people make up less than three per cent of the US population, with an estimated 3.3 million Muslims and 5.7 million Jews, but they remain the most targeted. The FBI found both groups suffered an increase in hate crime in 2016, the year US President Donald Trump was elected. It’s a trend that has continued throughout 2017. 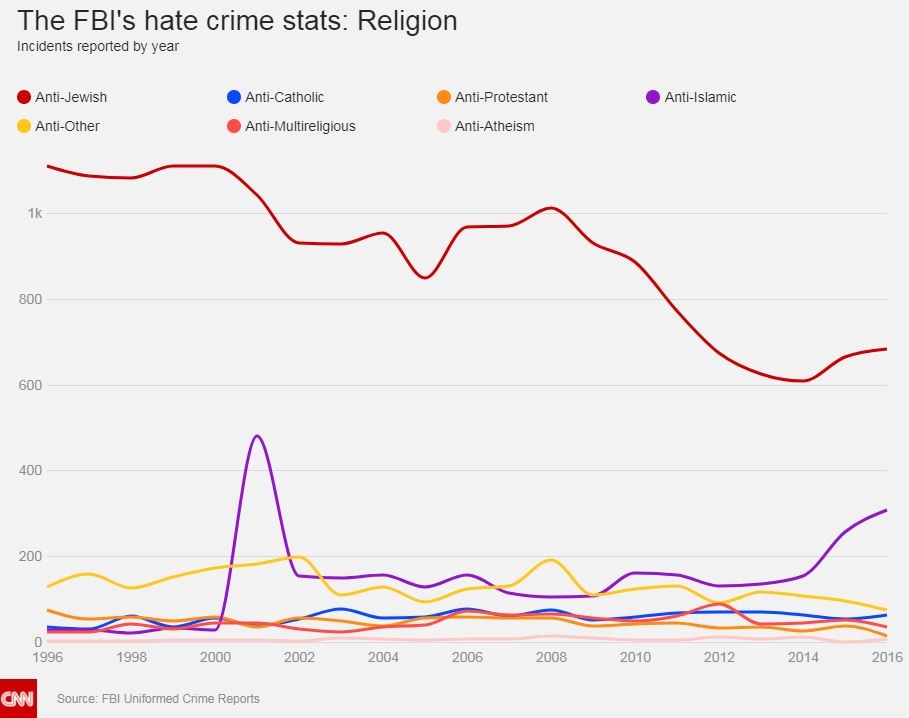 Hate crimes against Muslims and Jews rose in 2016.
FBI / CNN

“I personally link it directly to Donald Trump and his empowerment of bigotry and white supremacy,” claimed CAIR’s National Communication’s Director Ibrahim Hooper. 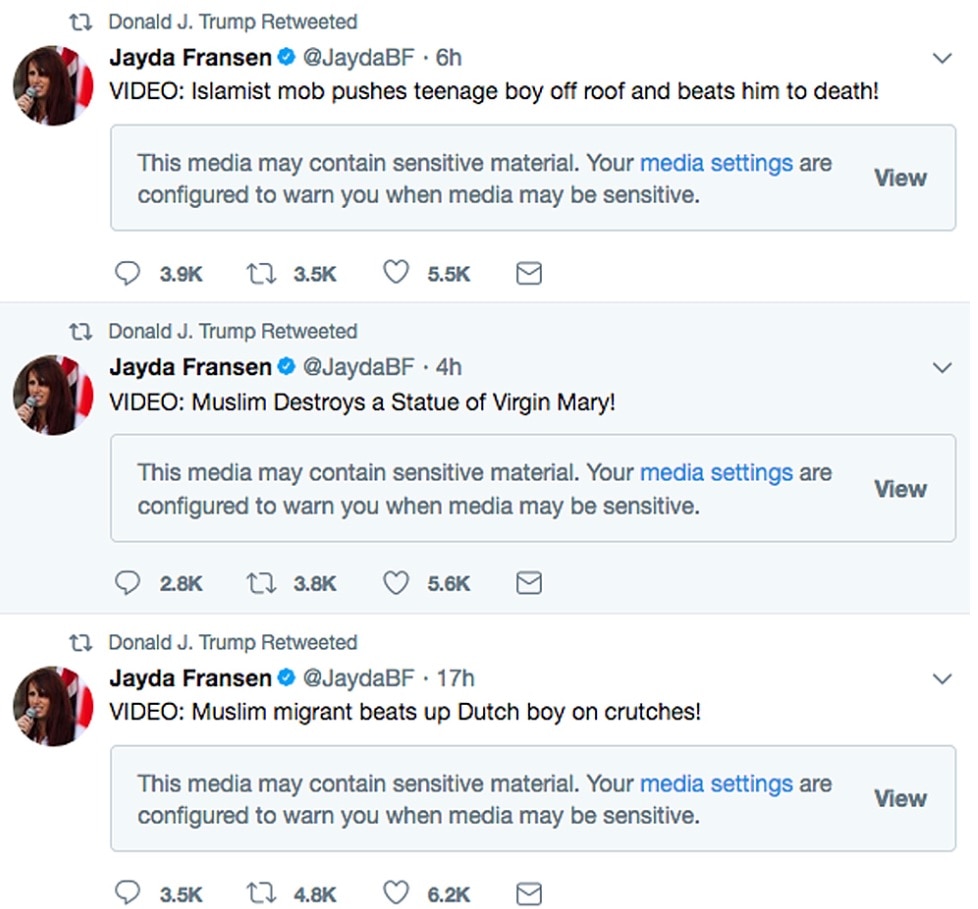 The anti-Muslim tweets re-tweeted by Donald Trump on 29 November 2017.
AAP

In 2015, Mr Trump shared an infographic of racial crime statistics first posted by a neo-Nazi Twitter user. The stats were false. The following year he re-tweeted a user with the handle ‘WhiteGenocideTM’.

A Trump campaign ad also appeared to reference an anti-Semitic conspiracy about Jewish billionaires controlling the global financial system, and since he took office, his proposed immigration policies, at one point, included banning all Muslim immigrants. US Jewish organisation the Anti-Defamation League said that since Mr Trump was elected, far-right extremists have become energised like never before.

“Many saw the 2016 election as a validation of their beliefs,” a spokesman told SBS News.

“In Charlottesville, extremists showed they could draw a large crowd of like-minded bigots to a public event where anti-Semitism and hate were on full display.”

Is Trump really to blame?

Brian Levin, director of the Center for the Study of Hate and Extremism at California State University, said his researchers have also recorded an increase in hate crimes against Muslims and Jews since Trump’s rise to power.

But while he acknowledged the link, he told SBS News: “I don’t think you can pin it all on Donald Trump.”

Hate crimes generally spike in election years, Professor Levin said, but the 2016 spike was the largest he has recorded. And while 15 hate crimes were recorded in the five days following Mr Trump’s proposal of a “total and complete” shutdown of Muslim immigration, Professor Levin’s team also recorded rises in hate crimes targeting transgender, Hispanic and white people in 2017. The phenomenon of ‘white grievance’ – a term coined by social scientists to describe a rise in intolerance among white Americans – though, cannot be ignored, he said.

As multiculturalism has taken a hold on the US, the number of white Christians has dropped to just 43 per cent according to the Public Religion Research Institute. The average income and life expectancy of white people have also both stagnated.

“When we see these types of social changes, extremism can grow,” Professor Levin said, comparing current trends to the 1920s resurgence of the Ku Klux Klan. 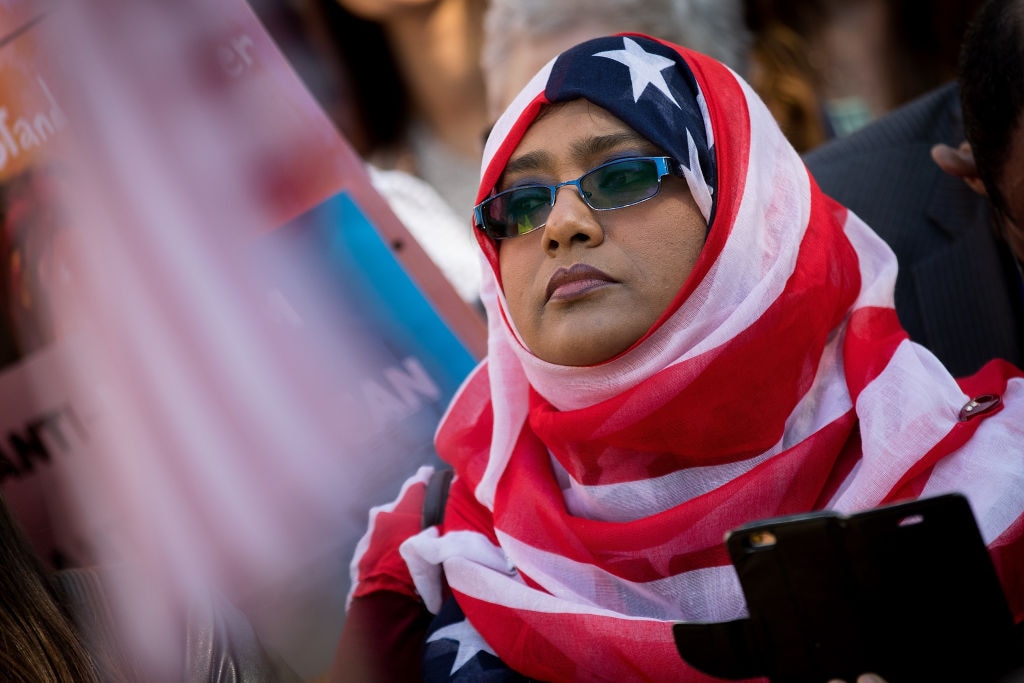 A woman wears a US flag headscarf at a protest against Donald Trump's proposed travel ban on 18 October 2017 in Washington DC.
Drew Angerer/Getty Images 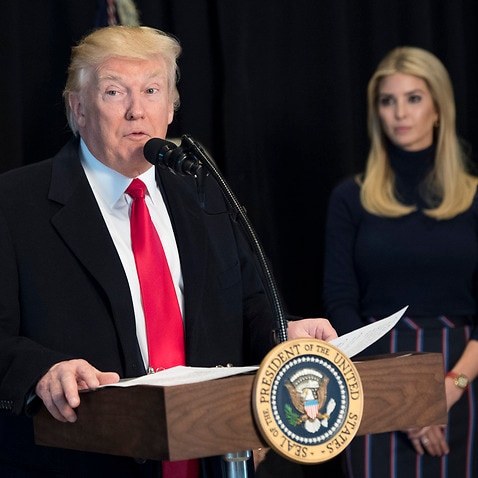 Trump's comments on anti-Semitism 'too little, too late' as threats spike globally

“One thing we know about hate-crimes is that they often rely on stereotypes, and these stereotypes have been promoted in the political arena,” Professor Levin said.

“When you have a political leader retweeting false messages from hate groups, that normalises these bigoted stereotypes by giving it an international platform and some degree of credibility.”

Last year, just over two-thirds of American Muslims reported that Mr Trump made them feel “worried”, according to a study by Pew Research.

But Professor Levin’s research shows the president could have the power to turn it around. 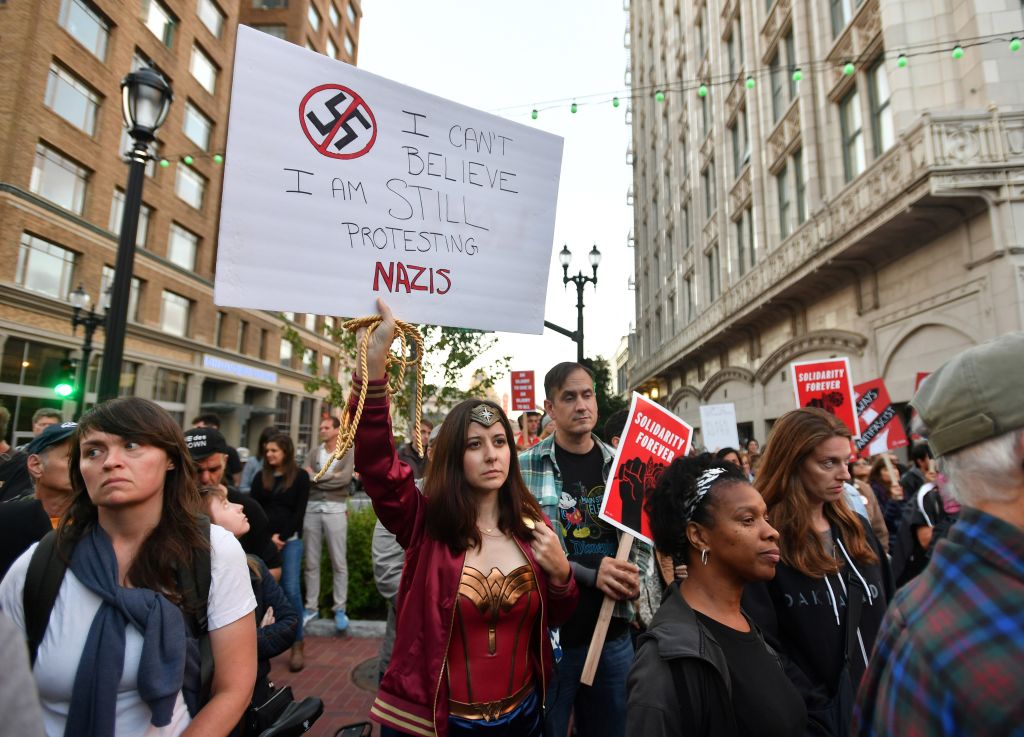 After the September 11 terror attacks in 2001, hate crimes against Muslims immediately spiked in the US. Six days later, President George W Bush delivered an address titled ‘Islam is Peace’.

“The face of terror is not the true faith of Islam, that's not what Islam is all about,” he said. “In our anger and emotion, out fellow Americans must treat each other with respect.”

After the Charlottesville riots, Mr Trump spoke out about the violence “on many sides”. He later tweeted that people must “condemn all that hate stands for”.

We ALL must be united & condemn all that hate stands for. There is no place for this kind of violence in America. Lets come together as one!

Mr Trump has said he abhors white-nationalism and anti-Semitism, and the White House has released statements of support for Muslims and Jews on religious holidays. Why do 25 per cent of Australians feel negativity towards Muslims?

“Melania and I send our warm greetings to Muslims as they celebrate Eid al-Fitr,” he said in June. Jewish people “have filled civilization with hope, love, and freedom” a statement marking the beginning of the Jewish calendar in September read.

But “the trends are pretty clear,” claims Professor Levin. “Extremism is always going to be a carnival mirror reflection (an exaggeration) of the debates that we’re having in the mainstream.”

“President Trump did not create the kindling which existed prior to his entry into politics, but he certainly lit fire to a lot of it.”