Flying internationally and domestically accounts for a large portion of an individuals carbon footprint - but is cutting back on air travel the answer to the global warming crisis?

Australia's population is growing rapidly, so too is its love affair with international air travel.

But it comes at a cost and not just to the hip pocket.

World leaders on climate change have warned the transport industry, in particular, aviation needs to drastically reduce and eventually eliminate its carbon emissions as part of a broader effort to limit global warming to 1.5°C by 2100 to avoid catastrophic consequences.

A special report by the UN's Intergovernmental Panel on Climate Change (IPCC), released on Monday, said achieving this would require rapid, far-reaching and unprecedented changes in all aspects of society because carbon dioxide emissions would need to fall by about 45 per cent from 2010 levels by 2030.

This includes jet-setters rethinking unnecessary air travel, according to the report's authors. 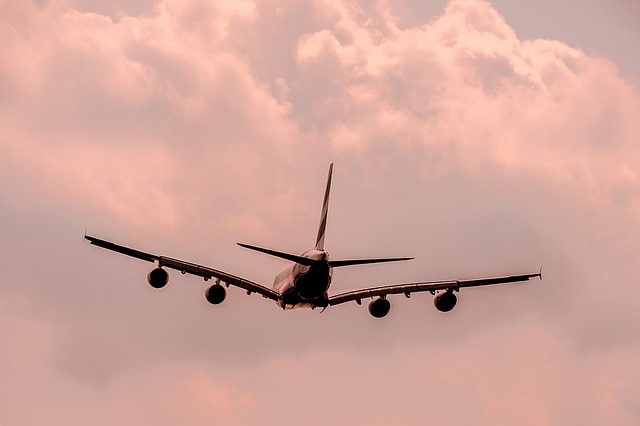 Jet-setters concerned about the environment may need to start seriously thinking about their travel patterns.
Pixabay

Planes are chewing up the carbon budget

There is no denying, flying internationally and domestically accounts for a large portion of an individuals carbon footprint and adds a significant amount of planet-warming gases to the atmosphere.

According to consumer group Choice, flying from Sydney to London return produces the same amount of carbon dioxide (CO2) emissions as running the average air conditioner in the living room during the day for 7133 hours.

Currently, Australia's aviation industry accounts for an estimated 17 per cent of all transportation-related emissions in Australia.

Australia's civil aviation sector - both domestic and international - contributed a total of 22 million tonnes of carbon dioxide emissions in 2016.

This equates to more than two per cent of Australia's total CO2 emissions. 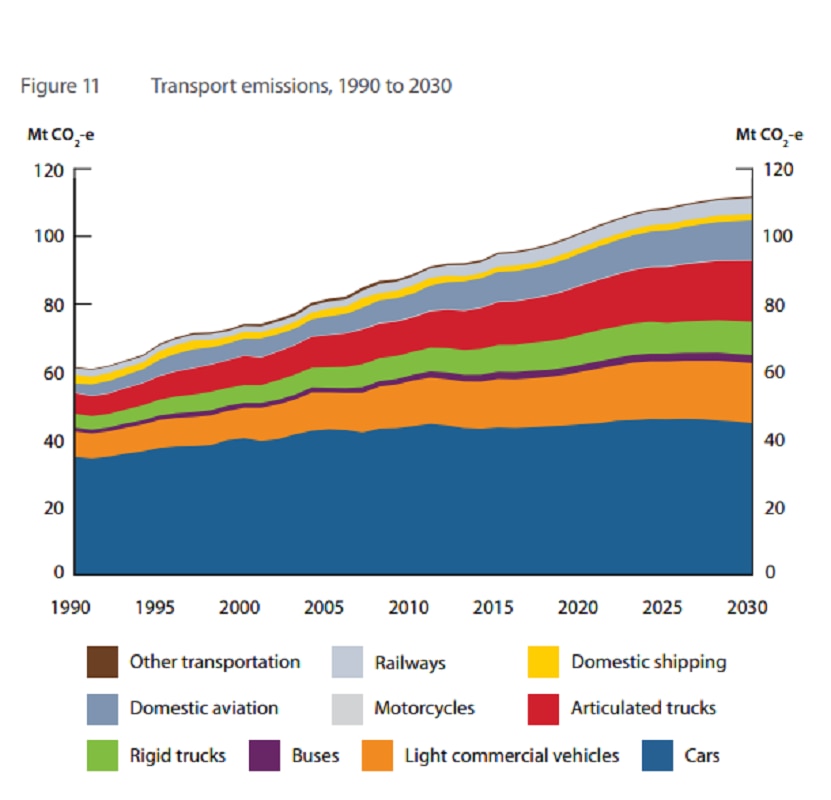 Table shows projected carbon emissions from transportation in Australia up until 2030.
Department of the Environment and Energy

With more and more Australians choosing air travel as their mode of transport as a result of a healthy economy, this figure is set to steadily increase.

International scheduled passenger traffic in July was 3.711 million compared to 3.541 million in July 2017 – an increase of 4.8 per cent, according to The Bureau of Infrastructure, Transport and Regional Economics (BITRE).

Domestic passenger traffic increased by 2.7 per cent to 5.65 million passengers over the same period.

The International Civil Aviation Organisation (ICAO) predicts that emissions from global aviation could increase by 300 per cent in 2050 compared to 2005.

According to an Australian government report released by the Department of the Environment and Energy in 2017, emissions produced through the combustion of fuels for transportation from the non-road sector are projected to grow steadily at an average of 2.2 per cent per annum out to 2034, with most of the growth occurring in the domestic aviation sector.

Is stopping air travel the answer?

Dr Mathew Dunn - an expert in clean combustion - told SBS News emissions created by the aviation industry is significant, but it's not the "biggest" problem.

In his opinion, giving up air travel is not going to solve the world's climate change problem.

"If everybody were to stop catching planes now it's not going to solve global climate change," said Dr Mathew Dunn from the Clean Combustion Laboratory at the University of Sydney.

"If we did nothing else and just stopped airplane travel there would be no real significant difference, we wouldn't be achieving our worst case of 1.5-degree global warming."

Although he did concede "every bit helps".

"In my opinion, certainly the way forward is how we can utilise fuel from renewable sources in an efficient way in airplanes," he said.

"I don't want to say offset carbons, so it's not as if we are burning fossil fuel and planting a forest somewhere else; what I am more referring to is how we make the fuels and where they come from, that they're not just being sucked up out of an oil well, they are actually being created from a renewable resource that is not a food source." 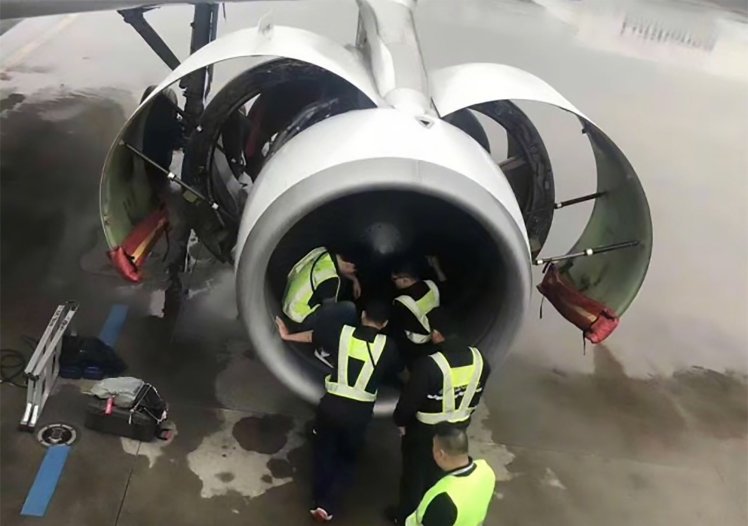 But the challenge that also confronts the sector is designing reliable engines that burn fuel in a way that is good to the environment while maintaining passenger safety.

"A lot of what the combustion science and development is about, is when you burn this fuel how can we do so in the cleanest possible manner and how can we design reliable engines so if the airplane has a 'flame-out' in the middle of the sky the engine will be capable of re-lighting reliably and doesn't fall out of the sky.

"And in doing that its always a significant challenge for the design of the combustion system to maintain reliable operation and minimise pollutant emissions," said Dr Dunn.

How is the aviation sector dealing with its emissions problem?

The ICAO, which consists of 191 Member States, has a bold plan to achieve carbon-neutral growth by 2020 through the adoption of a broad range of practical measures to reduce CO2 emissions from international aviation operations.

In response, Australia submitted its first Action Plan on managing aviation carbon emissions to the ICAO in November 2012, with a new edition approved in September 2017.

Among measures increasingly being adopted by airlines is carbon offsetting schemes, where a customer pays more for their ticket in order to buy carbon credits, which goes towards environmental improvement projects designed to reduce greenhouse gas emissions such as tree planting. 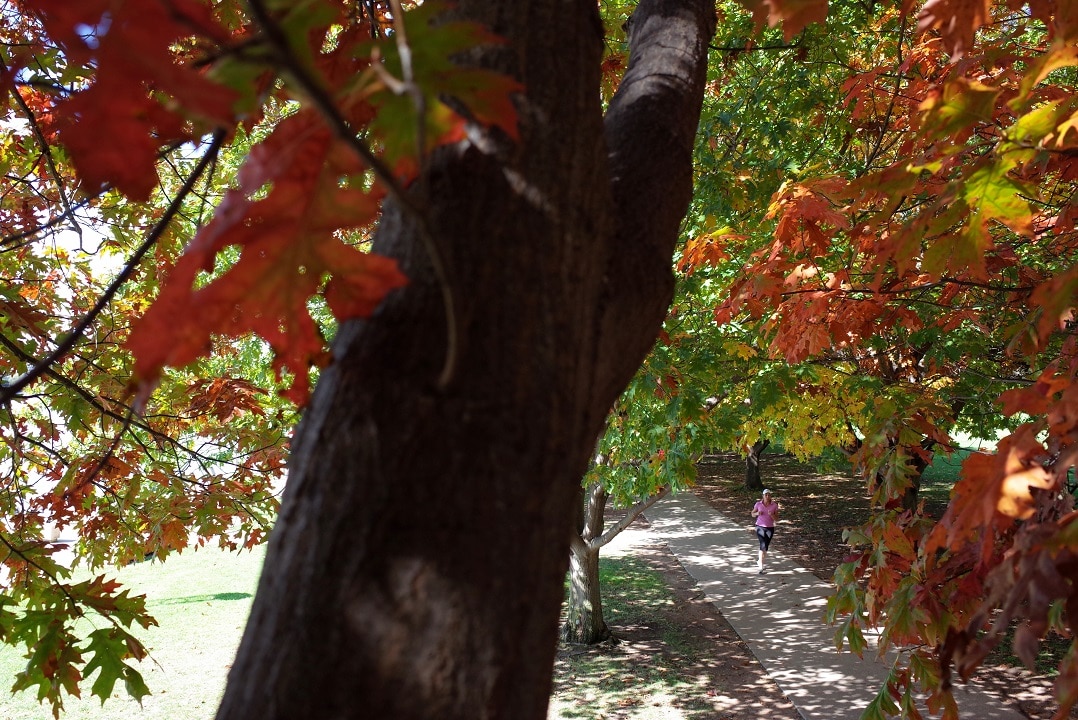 Planting trees is one way to offset carbon emissions.
AAP

Qantas has a focus on the B787 Dreamliner powered by the General Electric Next Generation (GEnx) turbofan engine to provide fuel savings, while Virgin Australia started a major fleet consolidation to reduce the number of aircraft types in operation to facilitate fuel savings.

Virgin Australia is also set to start flying a fleet of fuel-efficient 737-800 Max aircraft in 2019.

Airports are playing a part by embracing renewable energy schemes.

This is an international, voluntary and industry-recognised certification scheme, designed to assess the efforts of participating airports to map, manage and reduce their greenhouse gas emissions.