Venezuela's government is struggling to cope with a massive electricity blackout that has paralysed much of the country as President Nicolas Maduro blamed the chaos on US sabotage.

Even by the standards of crisis-weary Venezuelans, the power cut - which began late Thursday - was one of the longest and most widespread in memory, heightening tensions in President Maduro's power struggle with his US-backed rival, opposition leader Juan Guaido.

Thousands of Venezuelans are expected to protest once again on Saturday as Mr Guaido cranks up the pressure on the beleaguered President Maduro.

Both Guaido and Maduro, who are locked in a bitter power struggle for the right to lead the oil-rich South American nation, have asked their supporters to fill the streets of Caracas and other cities.

"Tomorrow, I call on the Venezuelan people to make a huge statement in the streets against the usurper, corrupt and incapable regime that has plunged our country into darkness," Guaido wrote on Twitter.

"We return to the streets and we won't leave until we reach the goal," said the 35-year-old National Assembly leader, who is recognised by more than 50 countries as Venezuela's interim president.

Mr Maduro has shut down offices and schools "in order to facilitate efforts for the recovery of electricity service in the country," Vice President Delcy Rodriguez tweeted.

Power supply was gradually being restored to large areas of Caracas on Friday afternoon, as well as parts of Miranda state and Vargas, which contains the country's international airport and main port. 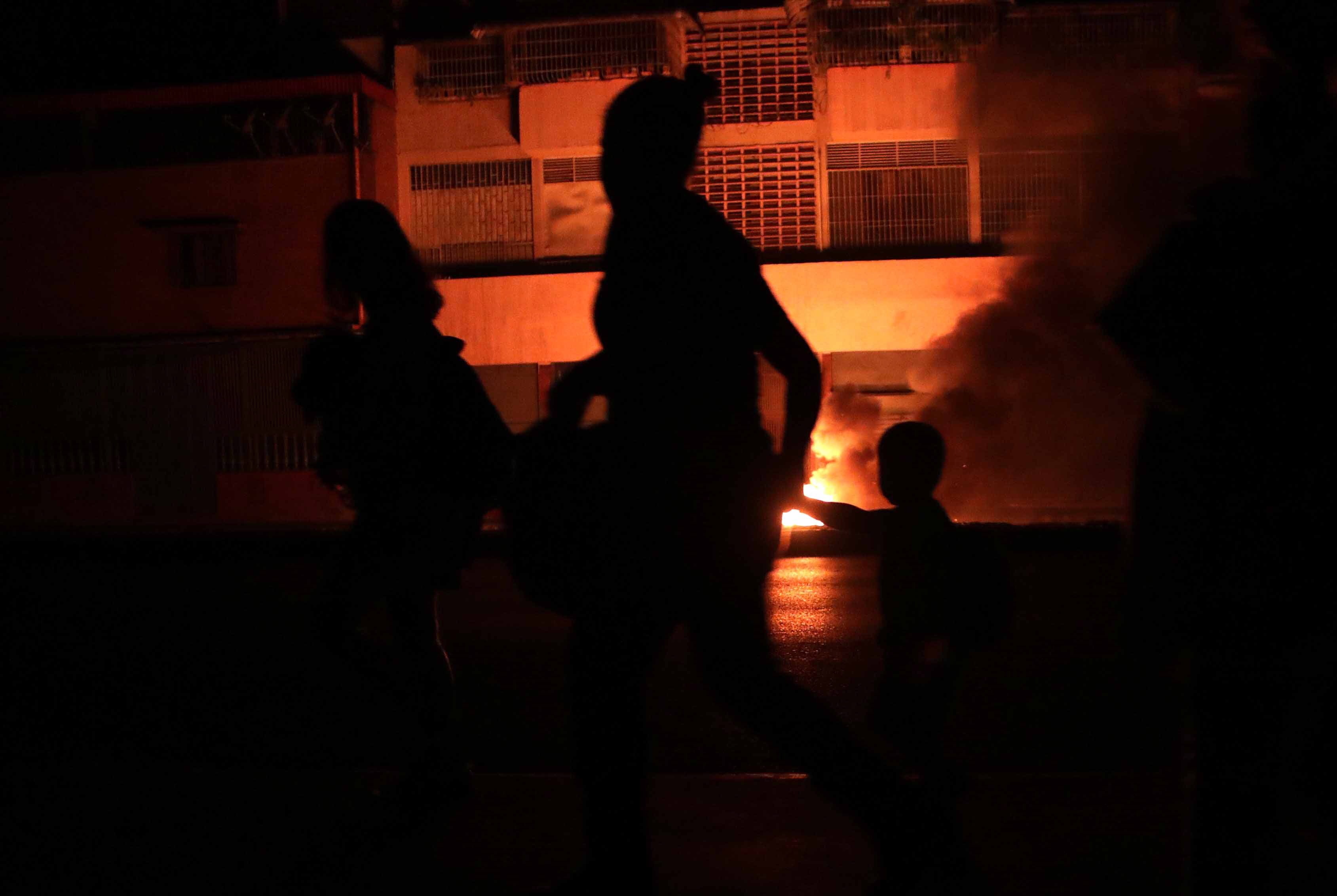 People walk in a street in the dark during a power outage in Caracas, Venezuela.
EFE

However, it was short-lived as the lights went off again, extending the blackout beyond 24 hours.

As night fell, people banging saucepans could be heard around the capital: a form of popular protest often seen in South America.

Large lines formed at the few gas stations open as people fetched fuel for generators. Some took gas from their cars.

The power "came for one moment and went away again," Antonio Belisario, who had been waiting around an hour for petrol, told AFP. 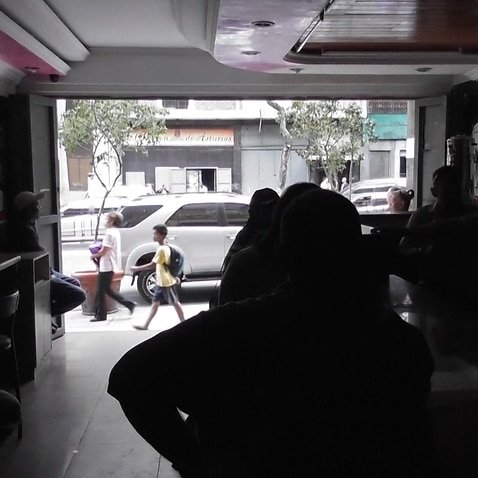 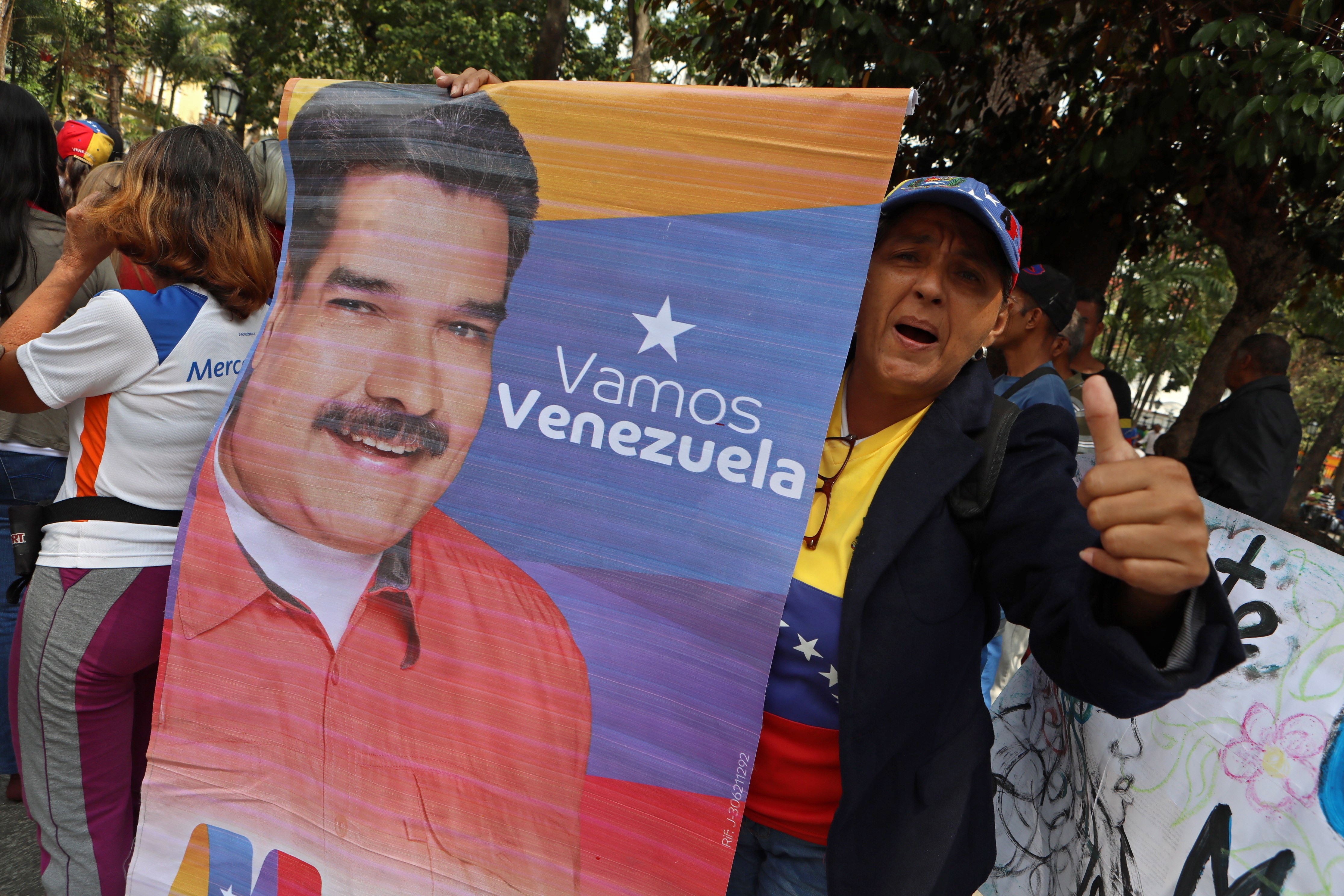 A group of people demonstrates in favor of President Maduro's Government, during a power outage in Caracas, Venezuela.
EFE

The outage had left most of the country in chaos, crippling day-to-day functioning of hospitals and other public services, according to local press reports.

Witnesses described scenes of chaos at several hospitals as people tried to move sick relatives in the dark to clinics with better emergency power facilities.

Marielsi Aray, a patient at the University Hospital in Caracas, died after her respirator stopped working.

"The doctors tried to help her by pumping manually, they did everything they could, but with no electricity, what were they to do?" asked Jose Lugo, her distraught uncle.

Generators at the JM de Rios children's hospital in downtown Caracas failed to kick-in when the blackout hit, said Gilbert Altuvez, whose eight-year old boy is among the patients.

"The night was terrible. Without light. Total madness," he said.

Emilse Arellano said urgent dialysis for her child had to be canceled Friday, after a night where staff worked in the light of cell phones.

"The children were very scared," she told AFP.

The putrid odor of rotting flesh hung around the entrance to Caracas' main Bello Monte morgue on Friday where refrigerators had stopped working and worried relatives gathered outside, waiting to be allowed to bury their dead. 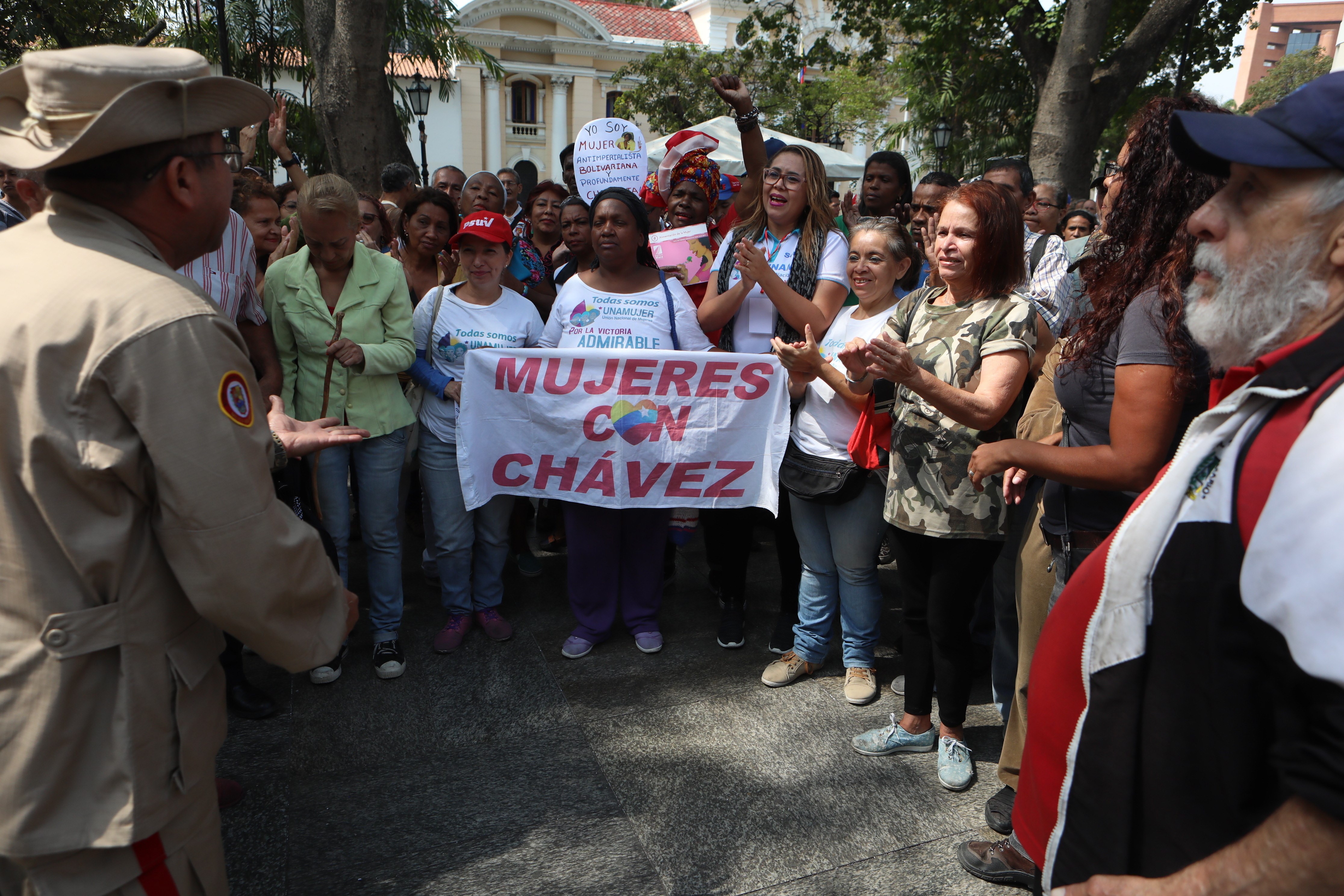 A group of people demonstrates in favor of President Maduro's Government, during a power outage in Caracas, Venezuela.
EFE

Traffic lights went out and the subway system ground to a halt, triggering gridlock in the streets and huge streams of angry people trekking long distances to get home from work.

Thousands of homes in Caracas - a crime-ridden city of 2 million people - were without water.

Telephone services and access to the internet were also knocked out.

The capital's Simon Bolivar international airport was hit, as were others across the country. 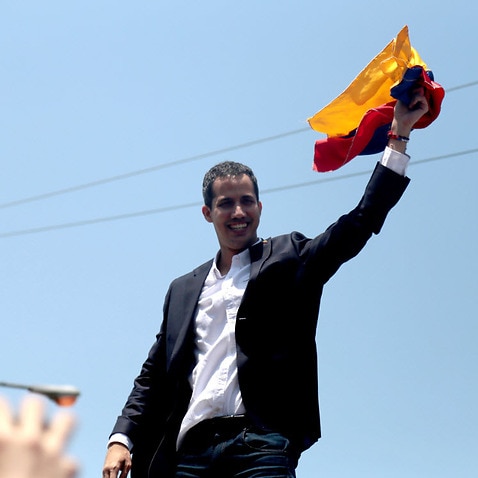 Following Mr Maduro's decision to close the borders to keep out humanitarian aid for his people, the country was completely isolated on Friday.

"The electrical war announced and directed by US imperialism against our people will be defeated," Mr Maduro tweeted.

Later, his communications minister, Jorge Rodriguez, announced on state television that Venezuela would make a complaint about the US's alleged role in the blackout before the UN Commission on Human Rights.

But US national security advisor John Bolton blamed the blackout on "years of Mr Maduro's corruption, under-investment, and neglected maintenance."

Guaido meanwhile reiterated his call for mass protests on Saturday.

"All Venezuela, now with more force than ever, returns to the streets of the whole country, we return to the streets and we won't leave until we achieve our goal," he said. 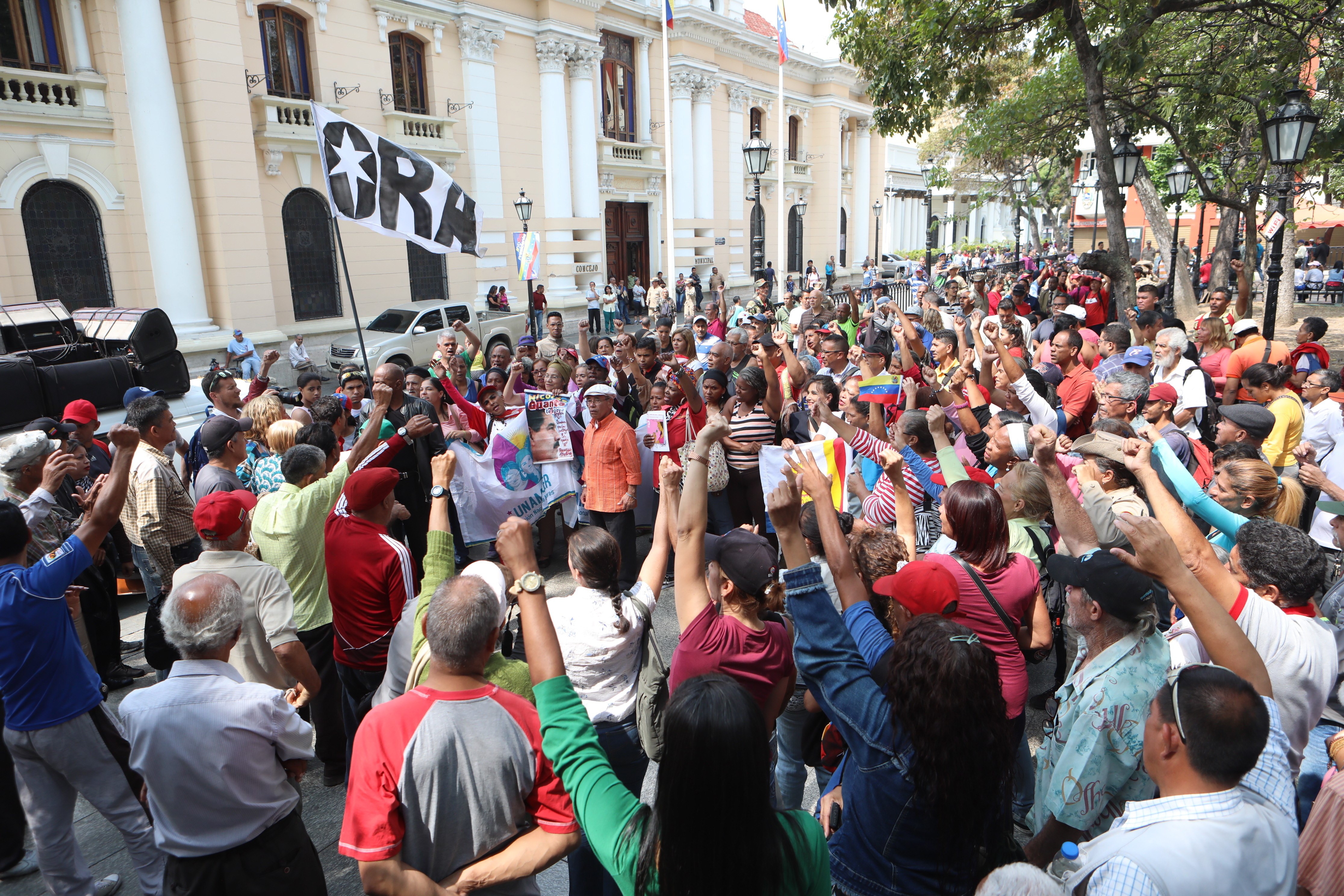 A group of people demonstrates in favor of President Maduro's Government,during a power outage in Caracas, Venezuela.
EFE

Venezuelans are wearily accustomed to blackouts. They have been common in the west of the oil-rich country for years, but have eventually spread to Caracas and other areas.

The state power company Corpoelec said there had been sabotage at the Guri hydroelectric plant in Bolivar state, one of the largest in Latin America. It gave no details. Mr Maduro is struggling in the confrontation with Guaido, who has declared himself interim president and is now backed by some 50 countries led by the United States.

Guaido says Mr Maduro's rule is illegitimate, arguing that his re-election win last year was fraudulent. He wants President Maduro to resign from the Miraflores Palace and make way for new elections.

57 mins ago US Politics