Venice has been hit by the highest tide in more than 50 years, with tourists wading through flooded streets to seek shelter as a fierce wind whipped up waves in St Mark's Square.

Venice has been hit by the highest tide in more than 50 years, with the city’s mayor declaring the floods the fault of climate change.

The exceptionally intense "acqua alta," or high waters, peaked at 1.87 metres as the flood alarm sounded across the Italian city of canals, the tide monitoring centre said. The mop up continues, with businesses flooded across the city thanks to high tides.
ANSA

"We're currently facing an exceptionally high tide. Everyone has been mobilised to cope with the "The situation is dramatic… we ask the government to help us. The cost will be high. This is the result of climate change."

As emergency services took to the canals to survey the damage, Italian media reported that a 78-year old local had been killed by electric shock as the waters poured into his home.

The coast guard laid on extra boats to serve as water ambulances.

Tables and chairs set out for aperitifs bobbed along alleyways in the dark, as locals and tourists alike waved aloft inside-out umbrellas, the water slopping over the top of even the highest waders and wellies. Water taxis attempting to drop people off at the glamorous and historic hotels along the Grand Canal discovered the gangways had been washed away and had to help passengers clamber through windows.

"It will be a long night," Mr Brugnaro tweeted, saying that as the water level began to drop again "the fears of a few hours ago are now being replaced by an assessment of the damage done".

He said he would declare a state of disaster for the city.

The climate change triggered flood was "a wound that will leave a permanent mark", he said. 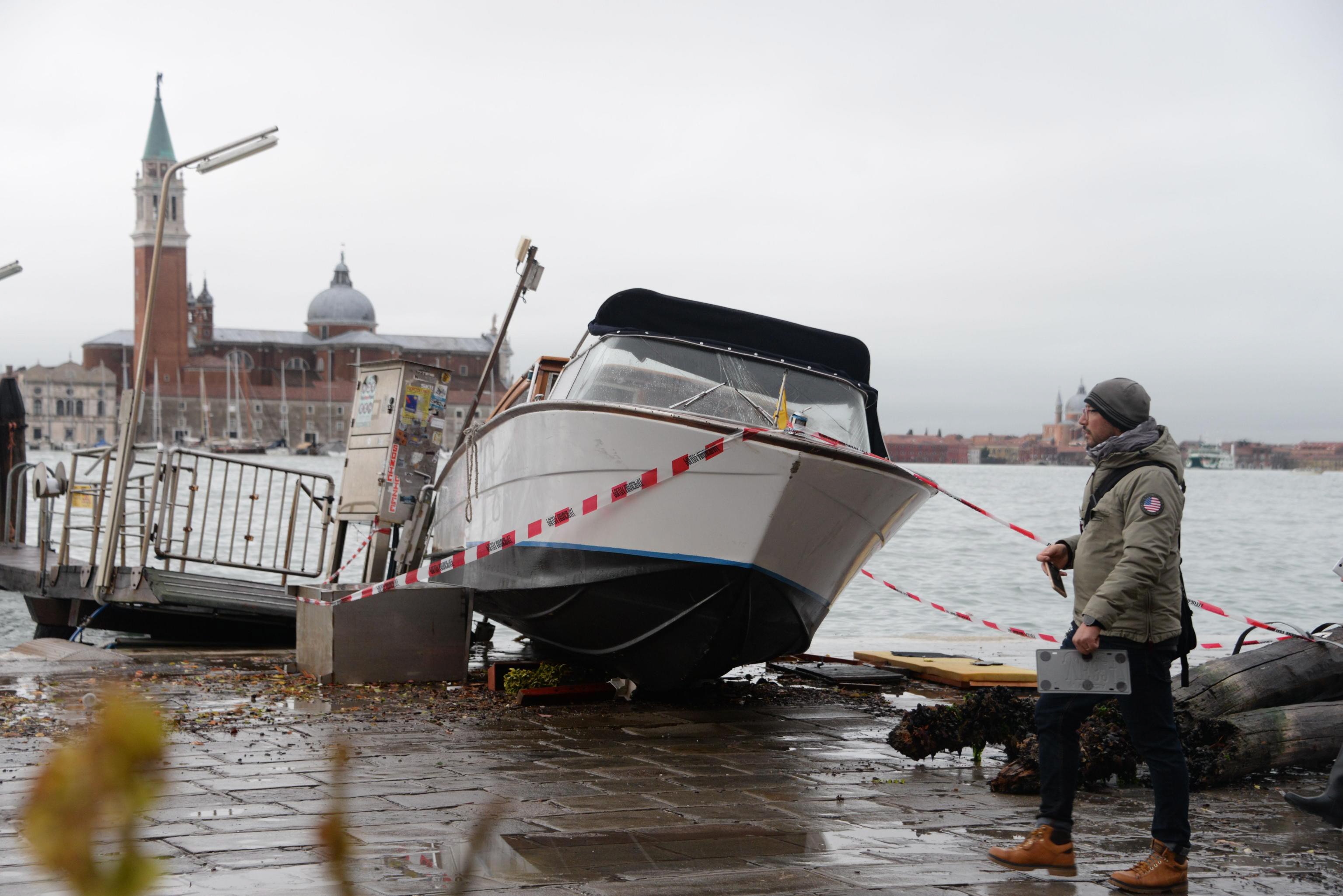 A stranded boat in Venice after the extremely high tide.
ANSA

At the sumptuous Gritti Palace, which has played host to royals and celebrities over the decades, including Ernest Hemingway, Elizabeth Taylor and Richard Burton, the decadent bar was largely underwater.

Rich tapestries were piled onto tables, while the waters lapped around velvet sofas and leather-bound books.

A couple of French tourists caught out said they had "effectively swum" after some of the wooden platforms placed around the city in areas prone to flooding overturned.

Since 2003, a massive infrastructure project has been underway to protect the city, but it has been plagued by cost overruns, scandals and delays.

The plan calls for the construction of 78 floating gates to protect Venice's lagoon during high tides.

St Mark's Square is particularly affected by the high tides, as it is located in one of the lowest parts of the city.

The vestibule of the basilica was inundated with water, and authorities planned to watch the building overnight.

Pierpaolo Campostrini, a member of St Mark's council, said the scale of the flooding on Tuesday had only been seen five times in the long history of the basilica, where construction began in 828 and which was rebuilt after a fire in 1063. A man clean up a gondola boat after the high tide in Venice, Italy. The historic city’s mayor has blamed the high tide on climate change.
ANSA

Most worryingly, Mr Campostrini said, three of those five episodes occurred in the last 20 years, most recently in 2018.

The cultural ministry said it would help fund improvements to the basilica's flood defences.

Venice was not alone: powerful rainstorms swept through Italy on Tuesday, hitting the south hard as well.

The heavy rainfall closed schools in several southern cities including Taranto, Brindisi, and Matera, as well as the Sicilian cities of Pozzallo and Noto, according to the national weather service.

In Matera, this year's European Capital of Culture, a tornado caused trees and lamp posts to fall, damaging numerous roofs and buildings. No injuries were reported.