The Australian Border Force has confirmed an undisclosed number of employees at Villawood Immigration Detention Centre are self-isolating after visiting the Crossroads Hotel.

An undisclosed number of employees at Sydney's Villawood Immigration Detention Centre have been forced to self-quarantine after visiting the Crossroads Hotel in Casula earlier this month.

As of Monday, the pub in south-west Sydney has been linked to at least 21 positive coronavirus cases.

An Australian Border Force spokesperson confirmed that a number of Serco guards had recently visited the hotel and were complying with NSW Health advice.

The spokesperson did not state how many guards were in isolation, but Ian Rintoul from the Refugee Action Coalition said he believed dozens of employees had attended a work function at the hotel during the first weekend of July. NSW Health workers administer COVID-19 tests to people in their cars at the Crossroads Hotel.
AAP

The confirmation came hours after a spokesperson from the Department of Home Affairs said a worker at Melbourne's Mantra Hotel, which houses detained asylum seekers, had tested positive for coronavirus.

The employee had tested positive on 8 July after developing symptoms the previous day, the spokesperson said.

"Everyone is panicking ... It's like a cruise ship in here. If anyone catches this virus, all of us could get it," asylum seeker Mostafa Azimitabar told SBS News. Detainees were informed of the positive case on Sunday. 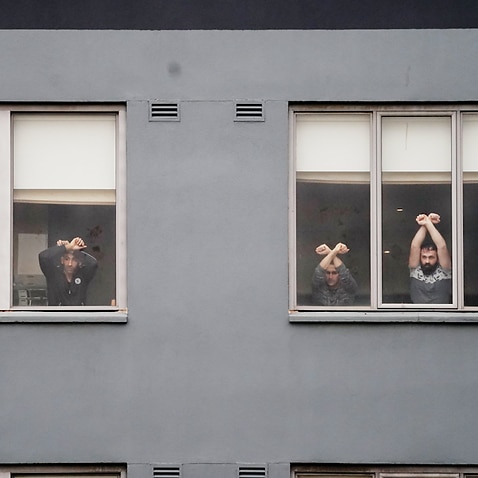 Advocates and politicians have raised concerns over the potential for COVID-19 to spread in immigration detention for months, including Labor MP Ged Kearney, whose electorate covers the location of the Mantra Hotel.

"They could have moved the men into the community to minimise the risk. They did not," she said.

The Queensland Government on Monday issued an urgent health notice calling on people in the state who visited the venue between 3-10 July to self-isolate.