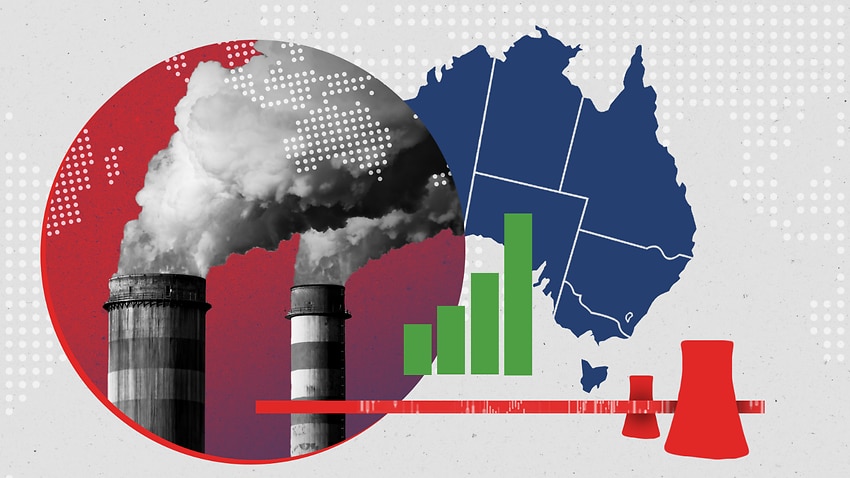 Where each Australian state and territory stands on net zero

As the federal government considers a bolstered climate change policy, Australia's states and territories have forged ahead with their own emissions reductions targets. Here's a breakdown of the commitments.

With the COP26 climate summit just weeks away, the federal government has this week been mulling over whether it will commit to a bolstered climate change policy.

Cabinet leaders met on Wednesday to discuss whether the Coalition would commit to a net zero emissions target by 2050, as Prime Minister Scott Morrison seeks to lock in a policy platform to take to the conference in Glasgow.

Speaking on Friday, Mr Morrison said the government is still "finalising" its position.

"I simply say to everyone that net zero was an outcome that I outlined at the beginning of this year consistent with our Paris Agreement," he said.

Senior members of the Nationals had previously warned a deal had not been signed off on the long-disputed target, with its party room expected to consider the proposal on Sunday.

Where do the states and territories sit?

World leaders have for some time been called on to commit to increasing the ambition of their emissions reduction efforts ahead COP26, widely considered to be the most crucial international meeting on climate change since the signing of the Paris Agreement in 2015.

Dozens of countries have committed to net zero emissions - achieving an overall balance between greenhouse gas emissions produced and taken out of the atmosphere - by 2050.

Australia’s current commitment is to reduce emissions by 26 to 28 per cent below 2005 levels by 2030 as part of the Paris Agreement. Meanwhile, states and territories have for some time forged ahead with their own emissions reductions commitments, putting Australia within reach of its global expectations for climate action, according to new analysis.

All subnational governments have committed to net zero emissions - covering emissions produced within Australia's borders - by 2050 or earlier, with the majority also setting interim targets.

A report by ClimateWorks Australia, a think tank connected to Monash University, has found current state and territory 2030 emissions reduction commitments offer Australia an "estimated defacto target" of 37 to 42 per cent below 2005 levels.

"While this is short of what is needed for the world to limit warming to 1.5 degrees, it is higher than Australia’s current commitment of 26 to 28 per cent," ClimateWorks' Rupert Posner said on Thursday.

To meet the Paris goals, the thinktank's benchmarks see Australia reducing emissions by 48 to 74 per cent below 2005 levels, with renewables generating 70 to 79 per cent of the country's electricity, and electric vehicles reaching 50 to 76 per cent of new car sales.

The report looks at the targets, policies and programs announced by states and territories since the start of 2020.

"They’ve built important momentum, and their current 2030 targets will get us about halfway there. The country now has the chance to capitalise on this," Mr Posner said.

It improves an earlier plan to cut emissions by 35 per cent below 2005 levels.

According to the latest available data cited by ClimateWorks, NSW made up 25.8 per cent of the country's total emissions in 2019. The state is home to around one-third of the country's population.

And how does NSW plan to achieve this? At the time, Environment Minister Matt Kean said the state has "big bold policies" to reach net zero by 2050.

On Wednesday, the government unveiled a new hydrogen strategy that will offer up to $3 billion in government incentives for "green hydrogen" energy projects.

The state will also exempt green hydrogen production from government charges and roll out a hydrogen refuelling network. Green hydrogen power involves the use of renewable energy sources to split water molecules and extract energy that can be used for household power, vehicles and industry.

The NSW Government also released its Electric Vehicle Strategy in July, based on a target to increase light electric vehicles sales to 52 per cent by 2030-31.

The Queensland Government set a target of net zero emissions by 2050 in 2017. It has also committed to a 30 per cent reduction on 2005 levels by 2030, along with a 50 per cent renewable energy target by that date.

The state's parliament passed a motion supporting the existing climate ambitions this week.

Queensland contributed 31.3 per cent of total emissions in 2019, according to data cited by ClimateWorks.

The state made up 17.3 per cent of total emissions in 2019, according to data cited by ClimateWorks.

To achieve these targets, the government says it will transition to a clean energy future, invest in innovative technologies - such as zero emissions vehicles and hydrogen - recognise and safeguard the role of the natural environment in reducing emissions, and support businesses and communities on their path to net zero.

Under the South Australian Government's climate plan, the state will reduce emissions by more than 50 per cent below 2005 levels by 2030 and achieve net zero emissions by 2050.

It contributed 4.5 per cent of the country's total emissions in 2019, according to data cited by ClimateWorks.

The report also acknowledged the state's path to 100 per cent renewables by 2030, with 62 per cent of its electricity being generated by renewable assets in the year to July 2021.

The Tasmanian Government on Wednesday announced a plan to legislate a target of net zero emissions by 2030, which it says will be "nation-leading and one of the most ambitious in the world".

It is largely a formality for the state, which has already reached net zero emissions in six of the past seven years.

It comes after the government last year declared it had become the first Australian state to be powered entirely by renewable energy, largely due to the state's hydroelectricity projects and wind farms.

It plans to double renewable energy generation from current demand levels by 2040.

Tasmanian Premier Peter Gutwein on Wednesday cited economic analysis which found emissions reductions would grow the economy by an extra $475 million by 2050 and create more than 1,200 jobs.

A draft bill to strengthen its Climate Change Act will be available for public consultation over the next five weeks.

The Western Australian Government set a target of net zero emissions by 2050 back in 2017.

WA Greens MP Brad Pettitt was also set to introduce a bill to state parliament on Thursday to legislate a reduction in emissions by at least 50 per cent on 2005 levels by mid-2030.

The state contributed 17.4 per cent of the country's total emissions in 2019, according to data cited by ClimateWorks.

The Territory contributed 0.2 per cent of the country's total emissions in 2019.

The Northern Territory set a net zero emissions target by 2050 in 2020 and is expected to set interim targets by mid next year.

The government has also set a target of 50 per cent renewable energy for electricity by 2030, along with a program to deliver 70 per cent of energy requirements for remote communities through renewables by that date.

It contributed 3.9 per cent of the country's total emissions in 2019.