As the Morrison government makes steps to recover from weeks of political turmoil over its own treatment of women and announces plans to better support First Nations communities, those working in frontline women's services say the need for more localised support can't be overlooked.

Independent women's support centres across the country are at risk of closure by June, with one Northern Territory service urging the federal government to reconsider the importance of on the ground support.

It comes amid a First Nations advisory group being established by the Commonwealth to help tackle domestic violence in Australia's Indigenous communities as part of new budget measures.

Nicki Petrou is the director of the NT Working Women's Centre and told SBS News they provide "a safe space for women to tell their stories and experiences in the workplace that often include bullying, sexual harassment and discrimination".

The centre also supports women who have experienced domestic and family violence including those who have a disability, are from the LBGTI community, are Aboriginal or Torres Strait Islander, and are from a culturally and linguistically diverse background. "Often women just need a listening ear, someone who will be able to understand what their experience has been and offer them the support they need," she said.

"The importance of having a localised service is that we understand the landscape in which we're operating and the challenges faced by people living in the Territory."

The importance of having a localised service is that we understand the landscape in which we're operating.

The centre had been receiving $400,000 a year in federal funding for more than 20 years before it failed to renew the allocation at the end of 2020.

One-third of its funding now comes from the Northern Territory Government, which Ms Petrou said will not be enough to run a territory-wide service that needs to respond appropriately to the demand and nature of the issues it deals with. In the wake of ongoing scrutiny of its own treatment of women, the federal government has seen a significant reshuffle of female cabinet members and the launch of a new women's taskforce.

This week, it announced the upcoming federal budget will include $1 million towards establishing an advisory group that will represent First Nations communities dealing with domestic violence.

"I think we need to make sure that we have one national plan to address domestic, family and sexual violence across the whole of Australia for every Australian," Minister for Women's Safety Anne Ruston said.

"However we do recognise that Indigenous women, particularly in rural and remote communities, face some unique challenges." Working Women's Centres are not-for-profit, community organisations that support women employees or women who wish to work, and only exist in the Northern Territory, Queensland and South Australia.

The Territory has the highest victimisation rate of domestic, family and sexual violence offences, with reported cases seeing a 23 per cent increase in 2020. As a result, frontline workers in the Territory have said it is critical for funding to be allocated to such on the ground services. 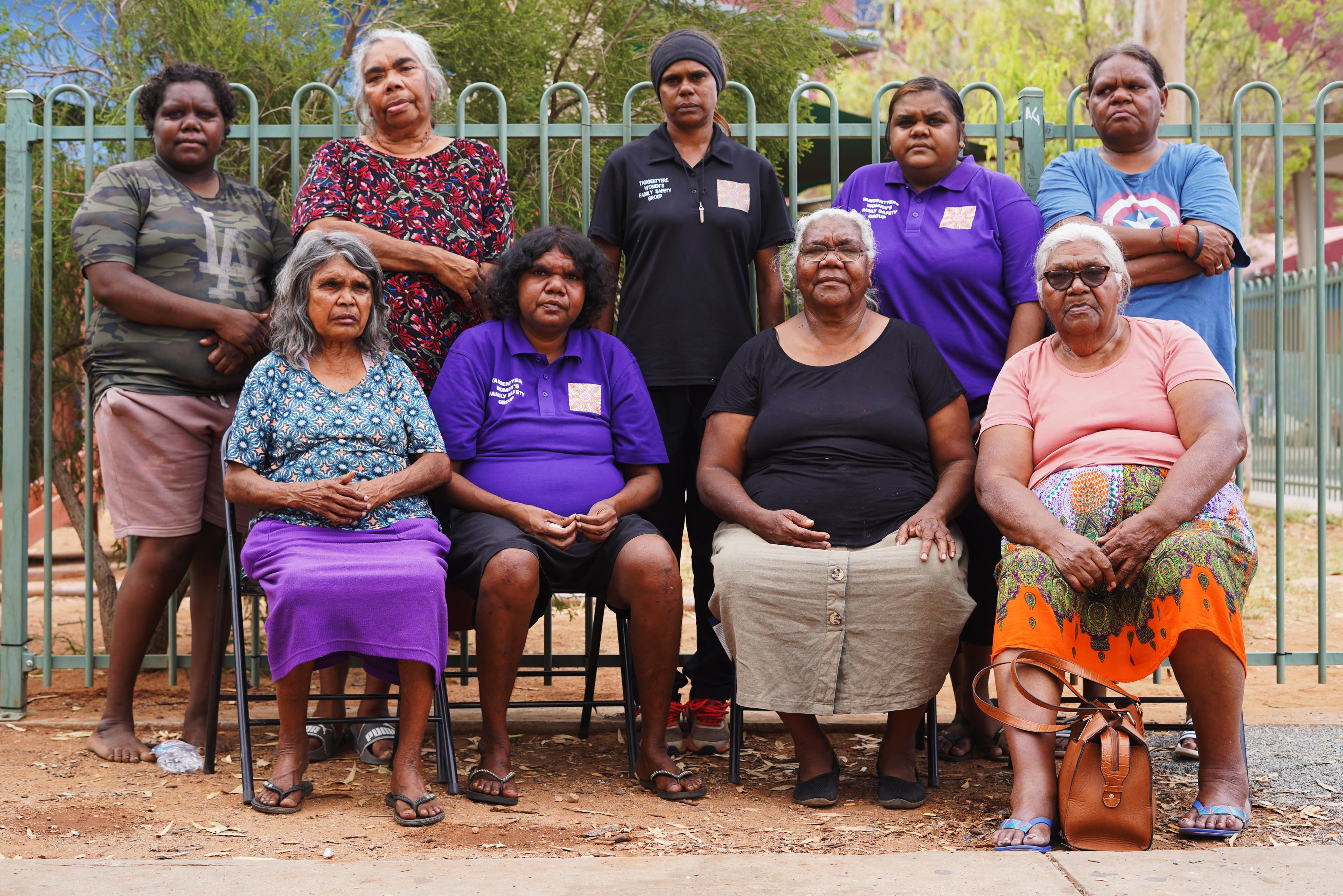 Shirleen Campbell (back, centre) says its important all frontline workers having funding certainty in the Territory.
Aneeta Bhole

Shirleen Campbell is an Arrernte, Anmatyerre, Warlpiri and Luritja woman, and co-coordinator of the Tangentyere Women’s Family Safety Group.

She has been working to stop domestic violence in her Alice Springs community for more than a decade, and while she has welcomed the new First Nations advisory group, she says funding certainty for all frontline workers is essential. "Cutting the funding to frontline services, from my experience, is not a way of moving forward," she said.

If services get funding cuts, "I can see a lot of stuff we've worked on tumbling down". The Territory has the highest victimisation rate of domestic, family and sexual violence offences.
AAP

Ms Campbell says she has watched as her community has been torn apart at the hands of violence.

"We want the government to stand with us, support us and listen to us," she said. Senator Ruston said she will be travelling to the Northern Territory and northern Western Australia in May to speak with women in the community.

The federal government has also committed to holding a national women's safety summit in July.