On 27 May 1967, the people of Australia collectively voted to remove two provisions in the Australian Constitution which discriminated against Aboriginal people. The overwhelming and unprecedented ‘YES’ response was the result of the tireless work of campaigners and the growing national support for the rights of Australia’s First Peoples. 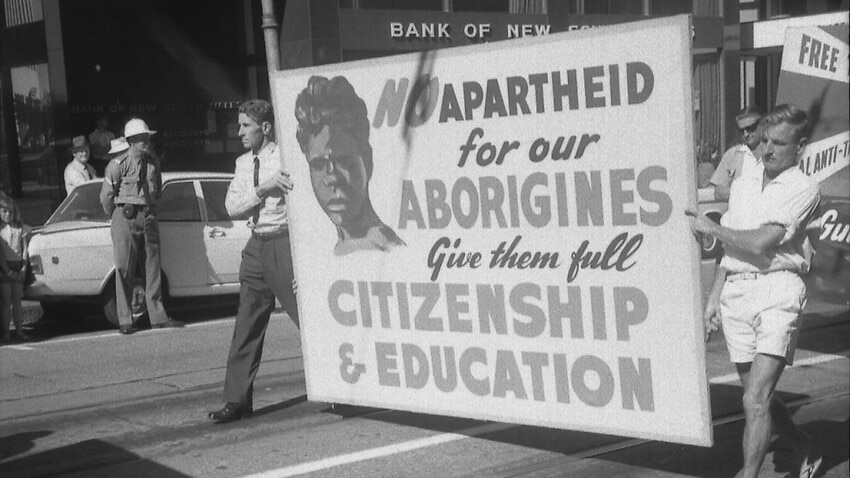 The Constitution is the founding document of the nation of Australia and sets out the rules of government. It can only be changed by a referendum which requires the support of the Federal Government, as well as the support of voters in the majority of the States and an overall national majority.

The two provisions that were changed in the 1967 Referendum were Section 51 which divides power between the Federal Government and the State Governments and Section 127.

51. The Parliament shall, subject to this Constitution, have power to make laws for the peace, order, and good government of the Commonwealth with respect to:-
…(xxvi) The people of any race, other than the aboriginal people in any State, for whom it is necessary to make special laws.

The words  ‘… other than the aboriginal people in any State…’ were removed from section 51(xxvi), which gave the Federal Government power to make laws for Indigenous Australians, rather than Indigenous people being governed on a state-by-state basis. For example, before the '67 Referendum, Indigenous people in NSW, Victoria and SA were able to marry freely and vote freely (from 1962), but those living in WA and QLD could not.

All of section 127 was removed, which meant that Indigenous people were a counted in the National Census and were considered a part of the Australian population.

Some common misconceptions regarding the '67 Referendum,

The campaign for a referendum

In 1957, the Aboriginal-Australian Fellowships launched a petition campaign drawing Government attention to the ‘political social and economic’ disadvantages suffered by Indigenous people at the Sydney Town Hall. The petition called Constitutional change as a starting point to bring about equal human rights for Indigenous people.

Several other petitions were also circulated and by the 1962-1963 campaign over 100,000 signatures had been gathered by volunteers.

In 1964, the debate was brought to the Federal Government by the Labor Opposition. The Federal Council for the Advancement of Aborigines and Torres Strait Islanders (FCAATSI), including prominent campaigners Faith Bandler and Pastor Doug Nicholls among others, continued to lobby for the change. The debate continued until 1967 when a referendum was announced.

The efforts to educate the public about the need for a referendum had already begun with the petitions campaign.

The support of all major parties aided the Government in advocating for a ‘YES’ vote. The usual practice of presenting both sides of the debate was abandoned and a ‘NO’ case was never included as part of the official presentation. Many churches, community groups and journalists also joined their voices in support.

The Federal Council for the Advancement of Aborigines and Torres Strait Islanders (FCAATSI) set up a national ‘Vote YES’ campaign with state directors appointed to increase public awareness. Aboriginal spokespeople continued to gain increasing media coverage over the course of the campaign.

A driving force for an overwhelming YES vote was to put pressure on the Federal Government to use its new power to provide positive policies for Indigenous people.

On the 27 of May 1967 the public went to the polls. They returned the highest ever YES vote for a referendum with 90.77% of Australians in support.

While approximately ten thousand Indigenous Australians voted, many were ineligible as the citizens of the Northern Territory and the Australian Capital Territory were not given a vote.

What did it achieve?

The campaign itself drew public attention to the treatment of Aboriginal and Torres Strait Islander people as second-class citizens. It also highlighted the disparities between the civil rights granted to Indigenous people in different states. In 1963, Indigenous people could choose who they married in three of the six states and legally own property in NSW only.

The referendum was referred to as 'the moment of truth whether the white people really are interested in our welfare or rights' by Charles Perkins, the Vice-President of FCAATSI.

The referendum win also had an important symbolic value and was seen by many Australians as a recognition of Aboriginal people as full citizens. It is also a symbol of Indigenous advocacy and was followed by further attempts to challenge the Indigenous affairs policy such as the 1972 Aboriginal Tent Embassy and the land rights movement.

'Winning the referendum is an important step forwards - but it is only a first step… the government is showing no hurry to legislate for us on education, housing, wages, trade training, land grants and many other things we need' declared FCAATSI president Joe McGinness.

Granting the Federal Government the authority to make laws for Indigenous Australians eventually saw new policies developed. By the end of 1967 a Council for Aboriginal Affairs was created and many welfare based programs and a Commission into land rights were later introduced under the Whitlam Government.

However debate has been raised about the effectiveness of the referendum in improving the situation of Indigenous Australians. There also continue to be concerns over the lack of consultation between the Federal Government and Aboriginal and Torres Strait Islander people with regards to Indigenous Affairs policies.