It is based on her 1991 painting, Yam Dreaming, signifying the importance of the yam plant as a staple food source in her home region of Utopia, 230km north-east of Alice Springs.

Emily Kame Kngwarreye is one of Australia’s most significant contemporary artists. Born at the beginning of the twentieth century, she grew up in the remote desert area of Utopia, 230 kilometres north-east of Alice Springs.

However, she wasn't 'discovered' commercially until she was at the age of 80, and almost overnight, she received international or national acclaim, completing more than 3000 exceptional works up until her death at 86 years of age.

Emily told stories and spread cultural teachings through her work, which was inspired by her traditional lifestyle as an Anmatyerre elder, and her lifelong custodianship of the women’s Dreaming sites in her clan Country, Alhalkere.

Indigenous design studio, Balarinji, turned Kngwarreye's 2D vision into 3D renders and eventually onto the airport fuselage in the Boeing paint facility in Seattle, US to repurpose the original print on to the aircraft, with more than 5000 individually unique dots applied.

This was the fifth aircraft Balarinji designed for Qantas. Managing director, Ros Moriarty said they carefully considered the integrity of the art to ensure the design's kept true to the spirit of the original painting.

"Qantas has provided an extraordinary canvas for Emily's art, and now will fly that canvas all around the world," said Ros, who was at the reveal in Seattle said.

Ros believes innovative projects such as this place Aboriginal culture at the centre of Australia's global identity.

"This aircraft will celebrate the life and painting career of Emily Kame Kngwarreye, an extraordinary artist who is revered around the world."

The new Dreamliner carrying the special livery will be welcomed into Australia on 2 March when it flies from Seattle to Alice Springs non-stop. What makes the launch even more special is that Emily's family will be able to welcome the aircraft's arrival directly into their hometown.

This isn't the first time Aboriginal culture has been showcased in the skies on planes.

Wunala Dreaming appeared on two Qantas 747-400 (VH-OJB) from 1994 until 2003. Wunala meaning 'kangaroo' in the Yanyuwa language, celebrated the ceremony tracks of the kangaroo spirit ancestors and the continuation of all living things in the harmony of nature.

Nalanji meaning ‘Our Place’, was a celebration of the balance of nature in Australia and reflected the lush colour palette of tropical Australia. 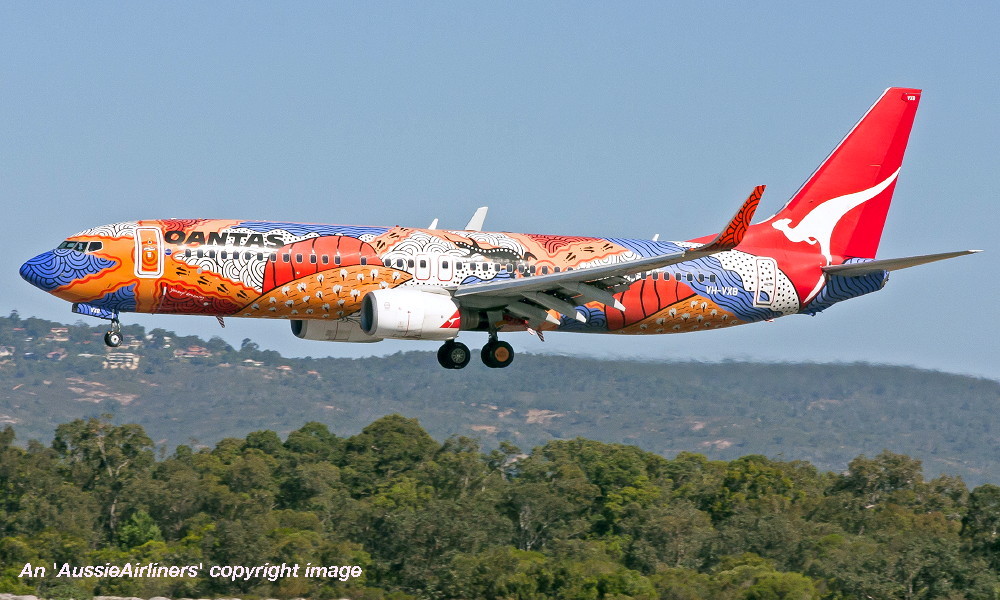 Yananyi Dreaming was a 737 aircraft launched in 2002 and drew on the work of Rene Kulitja who painted her dramatic country surrounding Uluru.

The design shows pathways leading to the symbol of Uluru, illustrated as both a physical form, and as an abstract representation of concentric circles.

The Mendoowoorrji 737 was delivered to Qantas in 2013, taking over 950-man hours to complete over a five-day period. It remains in the Qantas fleet today. Mendoowoorrji was inspired by the work of the late West Australian Gidja painter, Paddy Bedford.

Mendoowoorrji is an interpretation of the 2005 painting ‘Medicine Pocket’ which captures the essence of Bedford’s mother’s country in the East Kimberley region of Western Australia.

RECOMMENDED ARTICLES:
Qantas asked Aboriginal artist to work for free during NAIDOC week
Qantas has been accused of trying to pay an artist in "exposure" and displaying a lack of cultural awareness around Indigenous language and totems.
Indigenous artwork to greet international Qantas passengers
An installation inspired by stories from language groups across south-east Queensland will take pride of place at the revamped Qantas International Lounge in Brisbane.
Dreamtime Tuka flying high with Qantas
A small native bush food company is flying high as it shares its big flavours with Qantas passengers on all domestic flights.
Thomas Hammond soars to new heights at Qantas
Clontarf Academy students realise the sky is the limit thanks to a $450k funding boost from Qantas.
Advertisement