On March 13, Gurnam Singh, a Sydney-based entrepreneur was invited by TEDx CQU to give a speech on their prestigious platform.

At this speaking event organised collaboratively by TEDx and Central Queensland University in Sydney, Mr Singh spoke on the subject ‘Be What You Want to Be’.

TEDx is a localised community public speaking event based on the format of the American media company that runs TED (Technology, Entertainment, Design) talks by global leaders.

“I had it tough in Australia. I hardly knew any English because my schooling was in Hindi in New Delhi," says Mr Singh.

"When I got an invitation from TEDx CQU to give a speech in English, I dismissed it a junk email,” laughs Mr Singh, who runs Australian Indian Sports Educational and Cultural Society (AISECS). “I wrote back to TEDx CQU saying that I wasn’t sure if I could speak on their platform. But on second thoughts, I felt that sharing my struggles as an international student in Australia and building myself from scratch might inspire more like me here," says Mr Singh.

"It was a challenge to prepare a speech in English, but now I’m so confident that I feel I’m made for public speaking because I have a knack of convincing people,” adds Mr Singh who is often seen at Australia-India cricket matches dressed in flamboyant clothes and turbans, posing with sporting and political celebrities.

But just like it is for any other international student, life in Australia unleashed a train of challenges at him.

“I worked at a car wash initially for some time and was unpaid for my work. The boss told me that was my ‘training.’ I slept on a roadside bench several times because I would work till late at night and had classes the next morning. I still see that bench in Sydney CBD and go down memory lane," reminisces Mr Singh.

Recalling what he calls a 'turning point' in his life, Mr Singh tells the story behind his unique dressing style.

"I was once addressed as ‘Mr Taxi Driver’ by a participant at an event sponsored by my employer. She later said that men with turbans only drive taxis and trucks,” he says, recalling some sour experiences during his formative years in Australia. “That's when I decided to change the image of Sikh men in Australia. People saw a sea change in my dressing style as I made an attempt to highlight my turban and look attractive and unique,” he adds. He likes to flaunt his "Indian-Aussiness" through his attire, as evident in his pictures.

Listen to the podcast in Punjabi by clicking on the player inside the picture at the top. 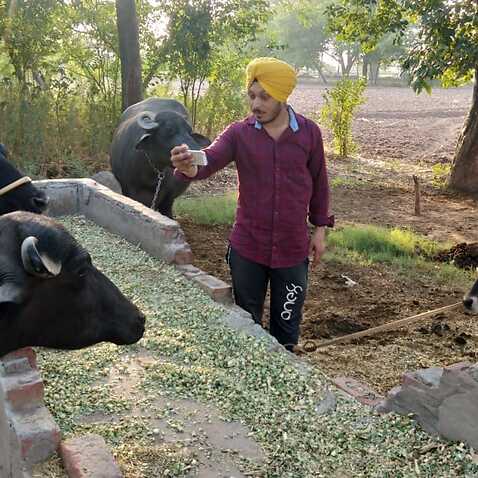 An Australian solution for a problem faced by Indian dairy farmers Meet Simran Kaur Wadhawan, the newest member of the RAAF