Man Mohan Singh was one of the first Sikh pilots of British Indian Air Force. He died in a Japanese raid in WWII on Broome, Western Australia on 3 March 1942. 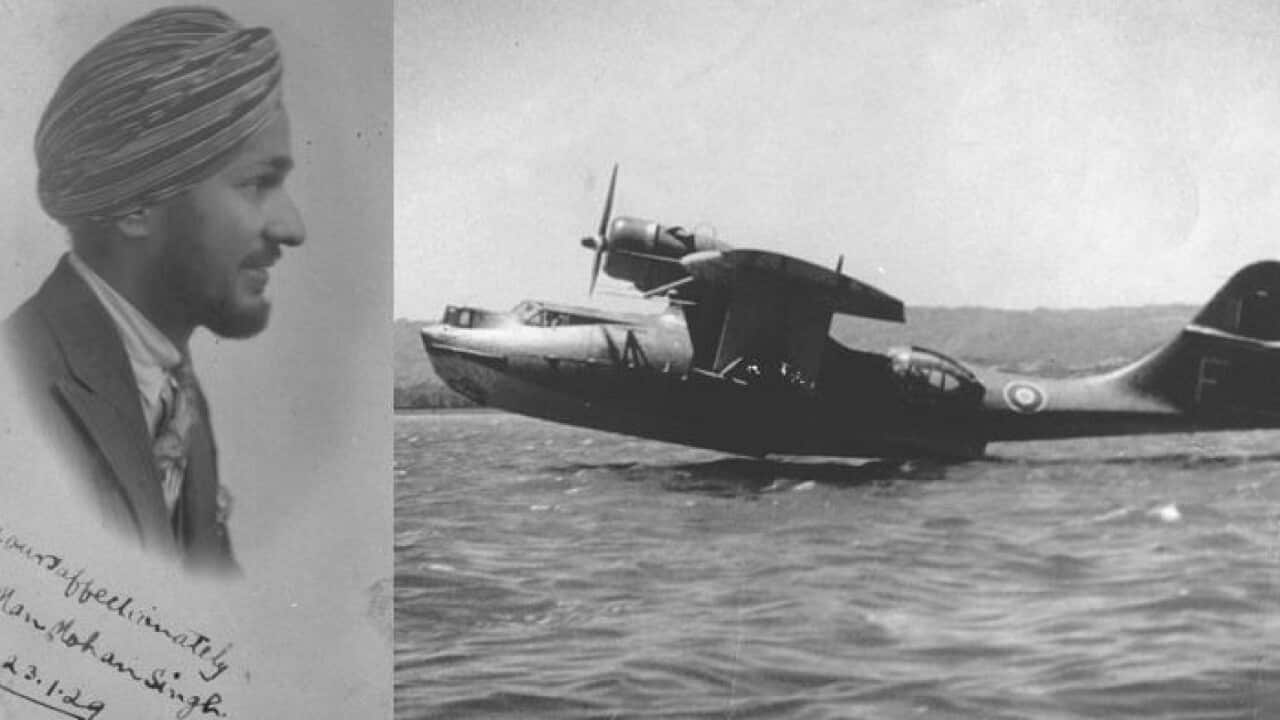 Man Mohan Singh was one of the very first Sikh aviators. 2017 marks his 75th death anniversary.

Mr Singh died in a Japanese raid on Western Australia in WW2, which also led to the worst death toll from any single air invasion in the nation's history.

Tarun Preet Singh from Australian Sikh Heritage Association (ASHA) told SBS that an often-overlooked aspect of history is the role Sikhs played both in fighting for, and dying in, Australia during wartime.

“Man Mohan Singh is one of those forgotten war heroes who died far away from his homeland.”

Tarun Preet Singh, Harjit Singh and other members of ASHA not only hope to complete Man Mohan's story in the Sikh history but they are also trying to broaden Australia's history so that more people understand how Sikhs took part in some of our nation's defining moments.

Harjit Singh is in the opinion that although Man Mohan Singh had been a Sikh hero of that day, but his demise so far from his Punjab home went barely noticed by history.

"He's been lost in Indian military history as well because of the timing and the whole division of the country," Harjit says.

Tarun Preet Singh in a interview with SBS Punjabi elaborated some of the unknown facts of Man Mohan Singh’s life.

“Man Mohan Singh was born in Rawalpindi, now in Pakistan, in September 1906. His father Dr Makhan Singh was a recipient of the Kaisar-i-Hind medal from the government for his distinguished public service as a medical practitioner.”

“In 1923, at the age of 17 he went to England to train as a civil engineer, receiving his B.Sc degree four years later at the University of Bristol.”

“In England, he also completed a two-year course in flying and aeronautical engineering for which he had been given a scholarship by the Government of British India.”

“Competing for the Aga Khan prize of 500 pounds Man Mohan Singh made three attempts during January-April 1930 in completing a solo flight between England and India.”

“Another competitor for the Aga Khan prize on this occasion was J.R.D. Tata who later became famous as a businessman.”

“Man Mohan Singh missed the prize, but he was the first Sikh and Indian to complete a solo flight from England to India.”

“Appreciating his perseverance, Maharaja Bhupinder Singh, ruler of Patiala state, compensated him for the lost prize and gave him employment as his chief pilot.”

“In 1934-35, Man Mohan Singh became the first Sikh and Indian to successfully complete a solo journey from England to South Africa in a light aircraft.”

“At the outbreak of World War II in 1939, Man Mohan Singh joined the Indian Air Force Volunteer Reserve as a pilot officer.”

“He was selected leader of an Indian Air Force batch of pilots sent to England for training and active duty."

“While in England he was known to have a cold shower every morning and not to eat anything until he had recited the Sikh prayer of Japji Sahib (one of the Sikh morning prayers).”

“Given Man Mohan Singh’s long and varied flying experience, he was given immediate command of a Sunderland flying boat with the RAF Coastal Command, hunting submarines during the battle for the Atlantic.”

“During WWII, he was promoted to flying officer in the British Indian Air Force and given the command of a Catalina aircraft in the No. 205 squadron for operations in the Philippines and Indonesia.”

“Having suffered heavy losses during operations to locate the Japanese invasion fleets, No. 205 squadron withdrew from Singapore and relocated to Java.”

“When the Japanese forces invaded Java the squadron retired to the south of the island and then to Australia.”

“The flying boats arrived at Broome on the morning of 3 March 1942. At 9:50am, a Japanese air attack consisting of nine Mitsubishi Zeros destroyed all fifteen flying boats still on the water in Broome harbour.”

“In this deadly attack, 88 people were killed. Man Mohan Singh was in a Catalina at the time the attack occurred. He is thought to have survived the shelling and resulting explosion however as Man Mohan Singh could not swim he drowned in the ocean.”

“Truly a forgotten hero, Man Mohan Singh died far away from his homeland fighting for the freedom of Britain and the world.”

Tarun Preet Singh, Harjit Singh and other members of ASHA not only hope to complete Man Mohan's story in the Sikh history but they are also trying to broaden Australia's history so that more people understand how Sikhs took part in some of our nation's defining moments.

Face up to racism with a week of programs challenging preconceptions around race and prejudice.

#FU2Racism |  Face Up to Racism Week starts 26 February on SBS. Watch the first show,
Is Australia Racist?
at
SBS OnDemand
and below: