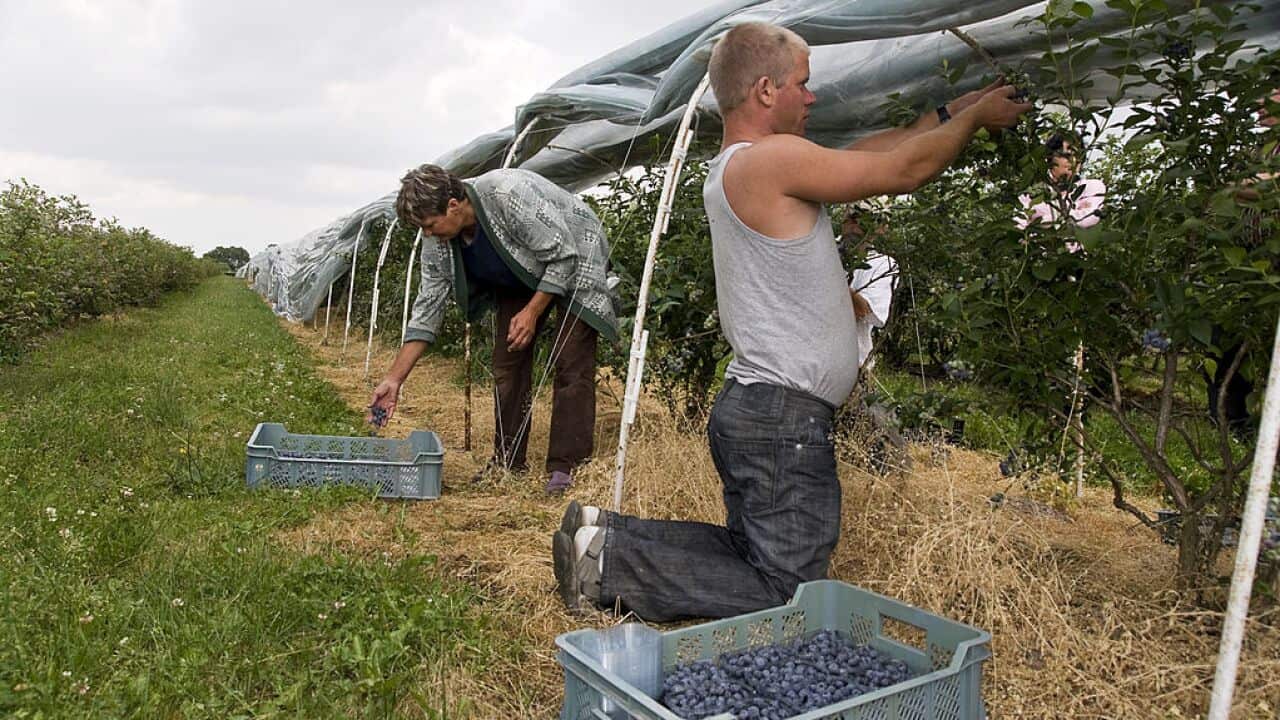 The AWU says workers are being exploited on farms all over Australia. Source: SBS / , Hulton Archive

Systemic failures in the Working Holiday Visa program are allowing backpackers to be gravely exploited, with some fruit pickers paid as little as $3 an hour, according to a new report.

The McKell Institute has released the results of a three-month investigation into blueberry pickers on farms around Coffs Harbour on the NSW north coast.

The horrifying findings of unscrupulous labour hire, severe underpayment and other mistreatment of workers have sparked calls for a royal commission into the horticulture sector.

Advertisement
Coronavirus lockdowns led to thousands of backpackers and Australians flocking to the region earlier this year, causing an oversupply of labour compared with other parts of the country.

Australian Natalie Trigwell, 46, lost her home near the NSW town of Nimbin in the bushfires and was forced to live in her campervan. She decided to pick berries "out of sheer desperation".

Ms Trigwell said the contractors managing the fruit pickers on the farm would aggressively yell at the workers.

They also showed a callous disregard for approaching bushfires.

Ms Trigwell said fires were so close to the orchard she couldn't see the berries through the smoke.

"There was no phone reception, we couldn’t get alert messages, and [the contractors] wouldn’t let us leave”, she said.

She walked out, and didn't get paid for three weeks' worth of work.

Makato, from Japan, was owed three weeks' pay from a contractor after agreeing to help find more fruit pickers.

"I did loads of desk work, posting ads and contacting the people ... I had over 260 applications on my ads," he said.

The contractor told Makato that if he helped with the administrative work, he would give him an hourly job, but the job never materialised.

He soon left to seek work from a fairer employer but while he was paid for his farm work, he was never remunerated for his administrative work.

READ MORE
Backpackers should be welcomed and given additional support, report recommends

Backpackers and other migrants tell similar stories of exploitation including pay well below minimum wage, seven-day working weeks and other mistreatment.

Working Holiday Maker (WHM)s are under pressure to complete 88 days of regional work in the first year of their visa to be eligible for a second year.

Despite coronavirus border restrictions, more than 85,000 WHMs remain in Australia.

The report's lead author Edward Cavanough says this visa requirement is the reason so many are mistreated.

“The need to tick off that visa requirement creates this enormous incentive for unscrupulous employers and often labour hire firms to take advantage of these workers’ need to complete those 88 days," Mr Cavanough told SBS News.

"That power imbalance is really at the core of this problem."

"[There's] a complete callous disregard for workers' safety, workers' rights. It's quite extraordinary."

Mr Cavanough said some backpackers were paying up to $150 a person to live in nine to 12-person share houses, netting landlords three times the median rent of some Coffs Harbour suburbs.

British backpacker Jessica, 24, was forced to pay $140 per week for a small house covered in mould she had to share with 14 other people, including her landlord.

Her time at work was just as miserable.

“The farmers ... they were really horrible as well. If you dropped any berries on the floor they’d scream at you and tell you to go home," she says in the report.

“Most people don't really realise all the s**t that people have to go through to get their 88 days ... it is like slave labour.

“It is kind of like prison….like prison guards walking up and down. Everyone [of the WHMs] was really pissed off and upset towards the end [of their 88 days]. As soon as anyone completes their days, they're gone”.

Calls for a royal commission

The report calls for a crackdown on rogue recruiters, stronger penalties, greater enforcement from workplace investigators and reforms of Australia's visa schemes.

It also argues for new laws to ensure farmers are required to pay a minimum hourly rate.

Workers' Union national secretary Daniel Walton says workers are being exploited on farms all over the country.

"This shocking new report can be added to the mountain of research indicating that Australian farms have become a hotbed of wage theft, exploitation and worker abuse," he said.

"It's not just Coffs Harbour either - pick a spot on the map and you will find outrageous exploitation."

While Mr Littleproud hasn't ruled a commission out, he favours fixing the problem through strengthened and harmonised state laws.

"[Attorney-General] Christian Porter is doing up legislation as we speak around exploitation of workers, particularly around labour hire workers and regulating them, making sure that we weed out those who do the wrong thing," he told media on Friday.

"This is disgraceful, and it needs to be rectified."

But he added that while "a small cohort" of farmers were doing the wrong thing, the "vast majority of Australian farmers ... do the right thing".

The National Farmers Federation (NFF) agreed there were instances of worker mistreatment that "can have a profound damaging impact" on the men and women involved, but said a royal commission would be "expensive and unlikely".

The NFF supports a national labour hire regulation scheme that holds employers to account, and has already called for a dedicated Agriculture Visa that would ensure foreign workers holding the visa would only be placed with fully accredited employers.

"We understand the AWU’s concerns. We share them,"  NFF CEO Tony Mahar said in a statement.

"Rather than calling for an expensive and unlikely royal commission, we invite the union to work with farmers on how we can ensure a positive experience for all farm workers."

Mr Cavanough said the McKell Institute would continue to investigate farm exploitation "entrenched in Australian horticulture" until the crisis was addressed at the national level, describing a royal commission as a "logical next step".

"The underpayment and mistreatment of workers is really damaging Australia’s reputation. Every single time one of these workers gets mistreated, they fly home, they tell stories of their mistreatment.

“This is undermining the reputation of Australia and is hurting all of us.”