China's Foreign Minister Wang Yi has dismissed speculation about the purpose of his government's recent security pact with Solomon Islands, saying it has "no intention at all" to build a military base in the Pacific nation. 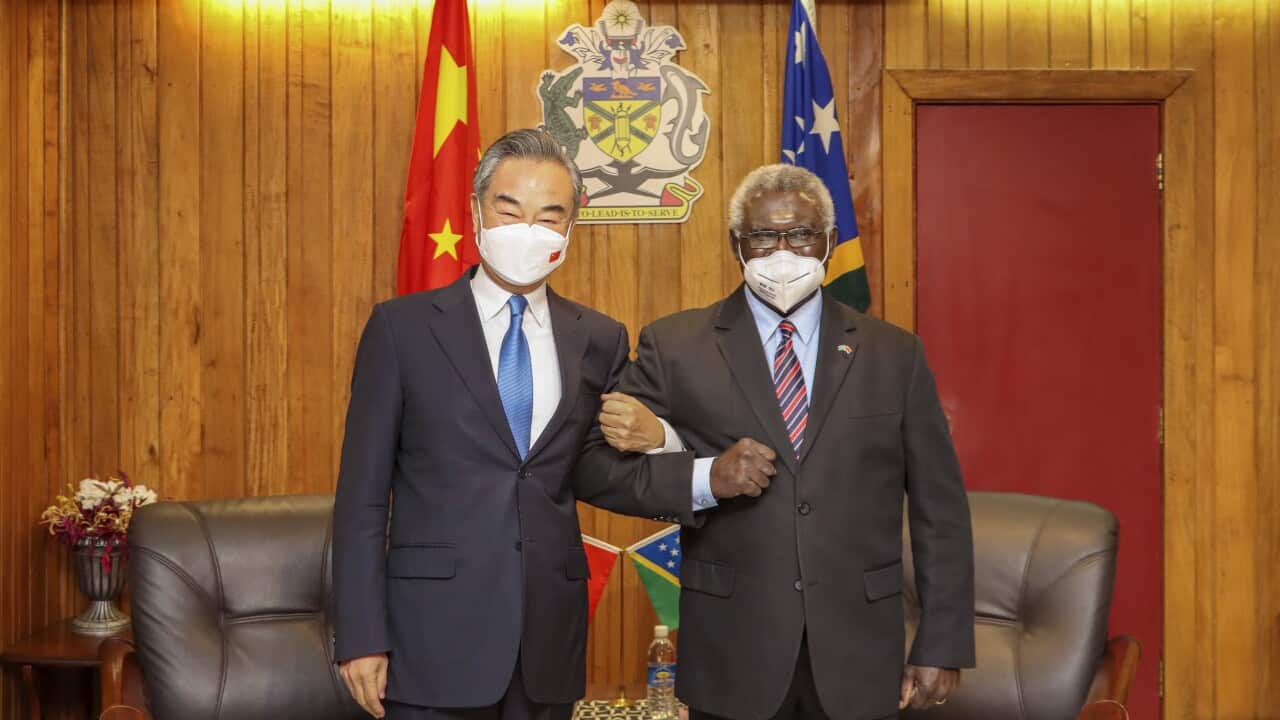 China has "no intention at all" to build a military base in Solomon Islands, Foreign Minister Wang Yi said Thursday, dismissing speculation about the purpose of its recent security pact with the island state.

The Chinese minister, who was in Honiara at the start of an extensive tour of Pacific island states, said the security agreement Beijing sealed last month with the Solomon Islands government was "above board, with honesty and integrity".

A leaked draft of the security agreement - the final version has not been made public, contained a provision that would allow Chinese naval deployments to the island nation, which lies less than 2,000 kilometres from Australia.
Advertisement
READ MORE
Penny Wong laments Australia’s ‘lost decade’ in Pacific as China reportedly seeks new regional deal
"It is not imposed on anyone, nor is it targeted at any third party. There is no intention at all to establish a military base," Mr Wang told a news conference after meeting with Solomon Islands' foreign minister, Jeremiah Manele.

Australia's former government, toppled in 21 May elections, had said that any move to create a Chinese military base would amount to crossing a "red line", without specifying the consequences.

But Mr Wang countered: "China's cooperation with Pacific Island countries does not target any country and should not be interfered or disrupted by any other country."

He also took a swipe at previous Australian governments describing the Pacific islands as being in the country's "backyard".

"They are not the backyard of anyone. All the Pacific Island countries are entitled to make their own choice instead of being just mere followers of others," the foreign minister said through a translator.
"Any smears and attacks on the normal security cooperation between China and Solomon Islands are not above the board and any such disruption will not get anywhere."

Mr Wang appeared to extend an olive branch to other Pacific powers, though, saying China respected existing international relationships with Pacific island countries and would explore joining three-way partnerships with them.

It also entails "capacity building" for the police force, the Chinese minister said.
READ MORE
Penny Wong makes 'no strings attached' pitch to Pacific in veiled attack against China
Last November, protests against Prime Minister Manasseh Sogavare's rule flared into riots in the capital Honiara, during which much of the city's Chinatown was torched.

The unrest "gravely threatened the life and property of the Chinese community in this country," Mr Wang said.

China sent anti-riot equipment and an "ad-hoc police advisory group" at the request of Honiara, he said, as well as sealing the security agreement.

It aimed to build Solomon Islands' law enforcement capacity and safeguard its security, he said and "at the same time, more effectively protect the Chinese nationals and institutions".
SHARE
3 min read
Published 27 May 2022 at 9:15am
Source: SBS, AFP