French far-right leader Marine Le Pen on Saturday accused her main rival for president, centrist Emmanuel Macron, of being soft on Islamists, in a blistering attack eight days before the vote. 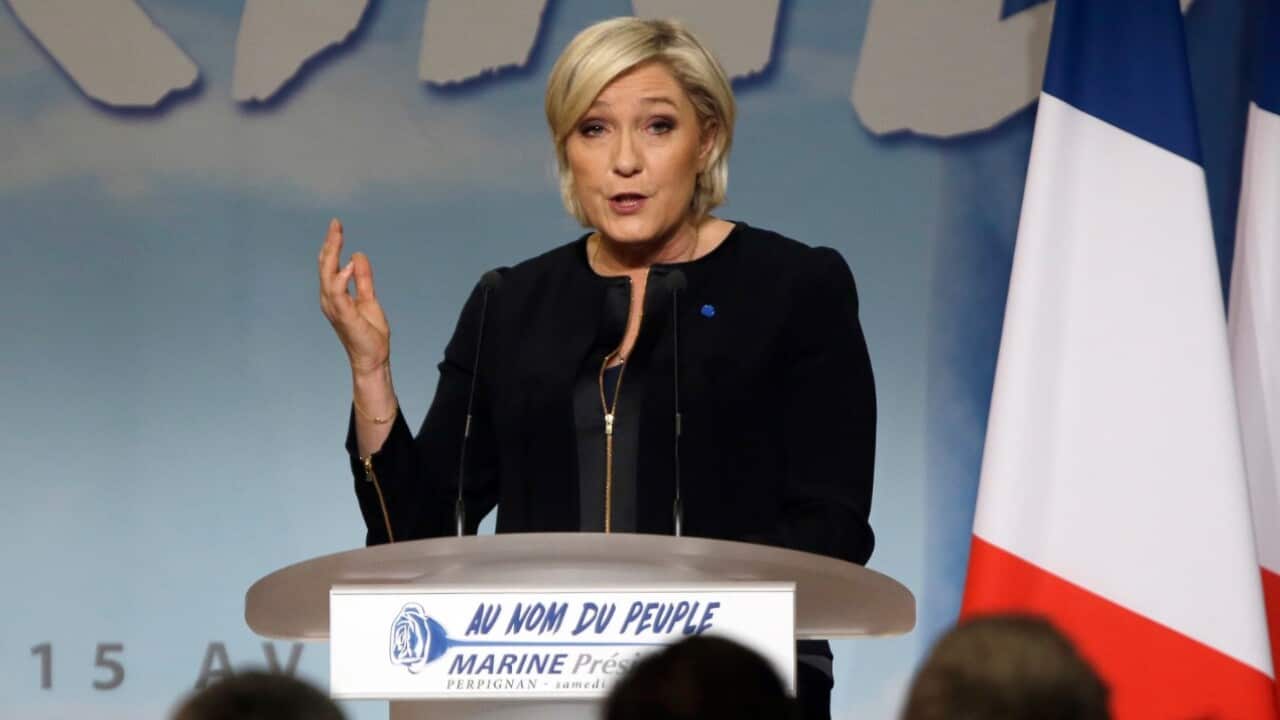 Le Pen pounced on remarks by Macron defending one of his top campaigners in the gritty suburbs north of Paris whom the far-right has labelled a "radical".

Mohamed Saou was asked to step back from Macron's campaign after a website published several of his old Facebook messages, one of which criticised the Charlie Hebdo newspaper targeted by jihadists in January 2015 for publishing cartoons of the Prophet Mohammed.

"He did one or two things that were more... radical.... But he's a good guy otherwise," Macron told Beur FM radio on Friday, adding that he did not want to fire Saou.

Addressing around 1,000 flag-waving supporters in the southern city of Perpignan Le Pen accused the leader of the "En Marche" (On the Move) party of doing the bidding of Islamist groups.

"With Mr Macron, it would be Islamism on the move," Le Pen said.

"It's as if he's writing a new chapter of Houllebecq's book Soumission," she said, referring to a novel by author Michel Houllebecq that portrays a fictional Islamist president coming to power in France.

The anti-EU, anti-immigration Le Pen and Macron, the 39-year-old europhile optimist given the best chance of beating her in a run-off, are leading polls for the first round of the election on April 23 with around 22-24 percent each.

In the past few days, radical left candidate Jean-Luc Melenchon and conservative ex-premier Francois Fillon have gained ground, transforming the election into a tight four-way race. The two leaders of the first round will go through to a runoff on May 7.

Le Pen, who says she would best defend France against the jihadists that have killed over 230 people in France since 2015, also took Fillon to task, accusing him of letting Muslims close themselves off from society when he was prime minister between 2007 and 2012.

"We must be intransigeant with the mortal danger that fundamentalist Islam represents for our country," she said.

In a Facebook message in September Saou expressed revulsion over a cartoon by Charlie Hebdo depicting Italian earthquake victims as pasta dishes.

"I never was and never will be Charlie," he wrote, referring to the "Je suis Charlie" (I am Charlie) slogan that became a rallying cry for freedom of expression after the January 2015 attack on the paper's Paris offices that left 12 people dead.

His remarks echoed those of a number of French people, who said that while they deplored the attack they felt Charlie Hebdo's cartoons stigmatised Muslims.

Macron described the post as "hurtful to people". Saou is being investigated by the party's internal ethics committee.

In other Facebook posts published by a French Jewish news site, Saou criticised the bans imposed by some towns last year on the Islamic burkini swimsuit and expressed concern about a backlash against Muslims after the July 14 truck massacre in the city of Nice.

Fillon's camp has also seized on the controversy to attack Macron, an economic liberal who took over the frontrunner spot from Fillon after Fillon became embroiled in a fake jobs scandal in January.

Eric Ciotti, a senior Fillon campaigner, accused former economy minister Macron of supporting "a man (Saou) who does not share our vision of France".