The Oscars Academy votes to expel Harvey Weinstein amid allegations or rape and sexual assault against the Hollywood mogul. 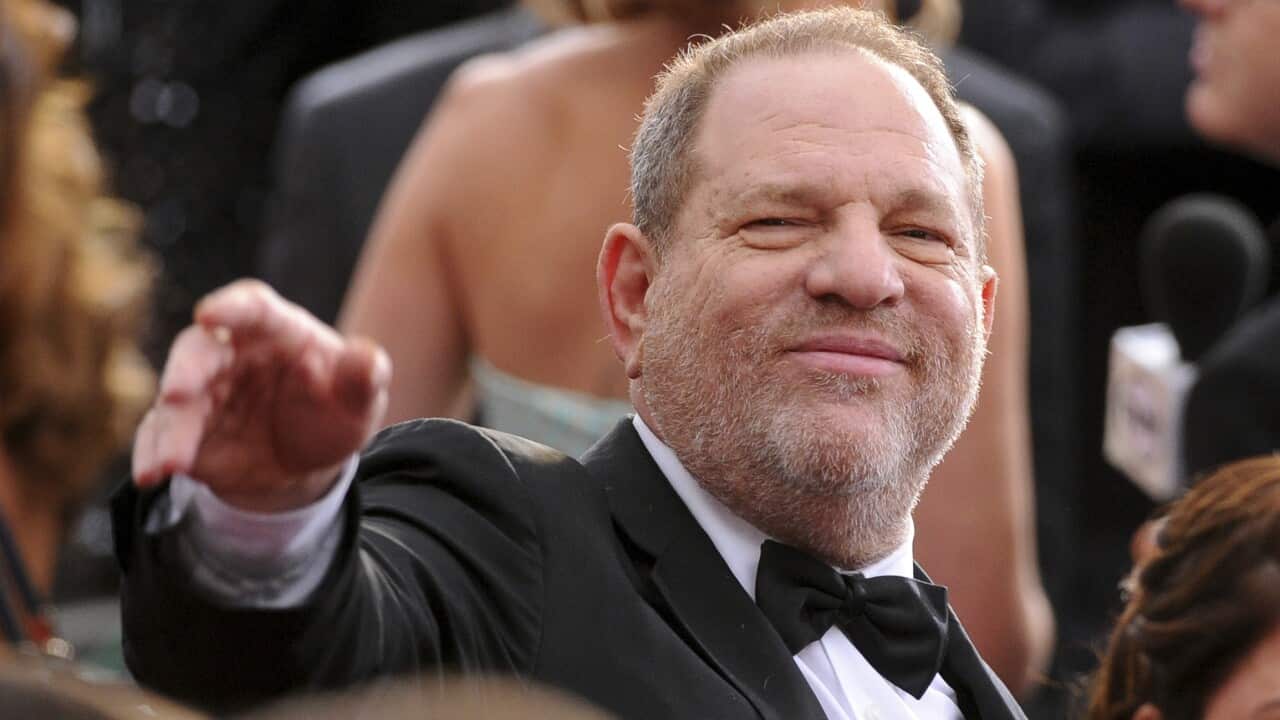 Harvey Weinstein has been expelled by the Oscars Academy. Source: Invision

The Academy of Motion Picture Arts and Sciences expelled Harvey Weinstein on Saturday amid mounting sexual harassment, assault and rape accusations against the disgraced Hollywood mogul.

An emergency meeting of its 54-member board of governors voted "well in excess of the required two-thirds majority," it said in a statement.

"We do so not simply to separate ourselves from someone who does not merit the respect of his colleagues but also to send a message that the era of willful ignorance and shameful complicity in sexually predatory behavior and workplace harassment in our industry is over," the statement read.

Advertisement
An avalanche of claims have surfaced since the publication last week of an explosive New York Times report alleging a history of abusive behavior by Weinstein dating back decades.

On Thursday, American actress Rose McGowan became the fourth woman to accuse the 65-year-old movie mogul of raping her.

"What's at issue here is a deeply troubling problem that has no place in our society," said the Academy, which organizes the Oscars.

"The board continues to work to establish ethical standards of conduct that all Academy members will be expected to exemplify."

The Producers Guild of America was also to meet to "consider disciplinary proceedings and the status of his membership," a source close to the union told AFP.

Since the outbreak of the scandal, more than two dozen actresses including Mira Sorvino, Rosanna Arquette, Gwyneth Paltrow, Angelina Jolie and Lea Seydoux have come forward saying they were sexually harassed by the producer.

The latest allegations involved the former Bond Girl Eva Green, whose mother told French radio Weinstein had harassed her daughter for months, and British actress Alice Evans, who penned an essay for The Telegraph claiming she had rejected his advances, and believes it may have harmed her career.

Weinstein was seen in public for the first time in days when paparazzi descended upon him as he left his daughter's home in Los Angeles on Wednesday.

"Guys, I'm not doing OK but I'm trying," he said in a video obtained by ABC. "I got to get help. You know what, we all make mistakes."

As he climbed into an oversized sports utility vehicle, he said he hoped people would give him "a second chance."

Celebrity gossip portal TMZ reported that Weinstein later flew to rehab in Arizona, possibly at The Meadows, a facility near Phoenix where golfer Tiger Woods and supermodel Kate Moss have been treated.

Weinstein's brother and business partner Bob told The Hollywood Reporter in an emotional interview published Saturday that he knew the tycoon was a cheater, but said he was unaware the extent of his "sick and depraved" behavior.

"For me, I thought he was literally just going out there cheating in a pervasive way," he is quoted as saying.

"It wasn't like he even had a mistress. It was one after another and that I was aware of. But as far as being in a room and hearing the description in The New York Times? No way."

Weinstein appears to have garnered little sympathy from the public, either, according to a survey conducted by celebrity branding expert and bestselling author Jeetendr Sehdev.

Some 82 percent of 2,000 people questioned as part of an ongoing study into American attitudes to celebrity and entertainment said he should be kicked out of the Academy.

Six in 10 said they would be less likely to watch the annual Oscars ceremony if Weinstein was allowed to remain and 40 per cent wanted him to be stripped of the Oscar he won for producing "Shakespeare in Love" (1998).

More broadly, a striking half of respondents said they now viewed Hollywood as a "sleazy" brand.

Hollywood, too, has largely turned its back on Weinstein, with veteran filmmaker Oliver Stone and fashion designer Donna Karan offering the only words of support.

While Stone merely warned against Weinstein being "condemned by a vigilante system," Karan went further, triggering outrage when she suggested women had been seeking a reaction from Weinstein by dressing provocatively.

Expulsion is a sanction the Academy had used just once before Weinstein, according to the trade magazine, against "The Godfather II" actor Carmine Caridi.

He was accused of giving tapes of around 60 Oscar movies seeking consideration for the Academy Awards to a neighbor who turned out to be a pirate.

Weinstein's films have received more than 300 Oscar nominations and 81 statuettes, according to The Weinstein Company, which he co-founded after selling Miramax.

The studio fired him on Sunday and is exploring a sale or shutdown, according to the Wall Street Journal.

Meanwhile the producer's wife, English fashion designer Georgina Chapman, has said she plans to divorce him.