The NSW chief health officer's warning came as the premier reiterated calls to get booster shots, saying half of the people in intensive care in NSW are unvaccinated. 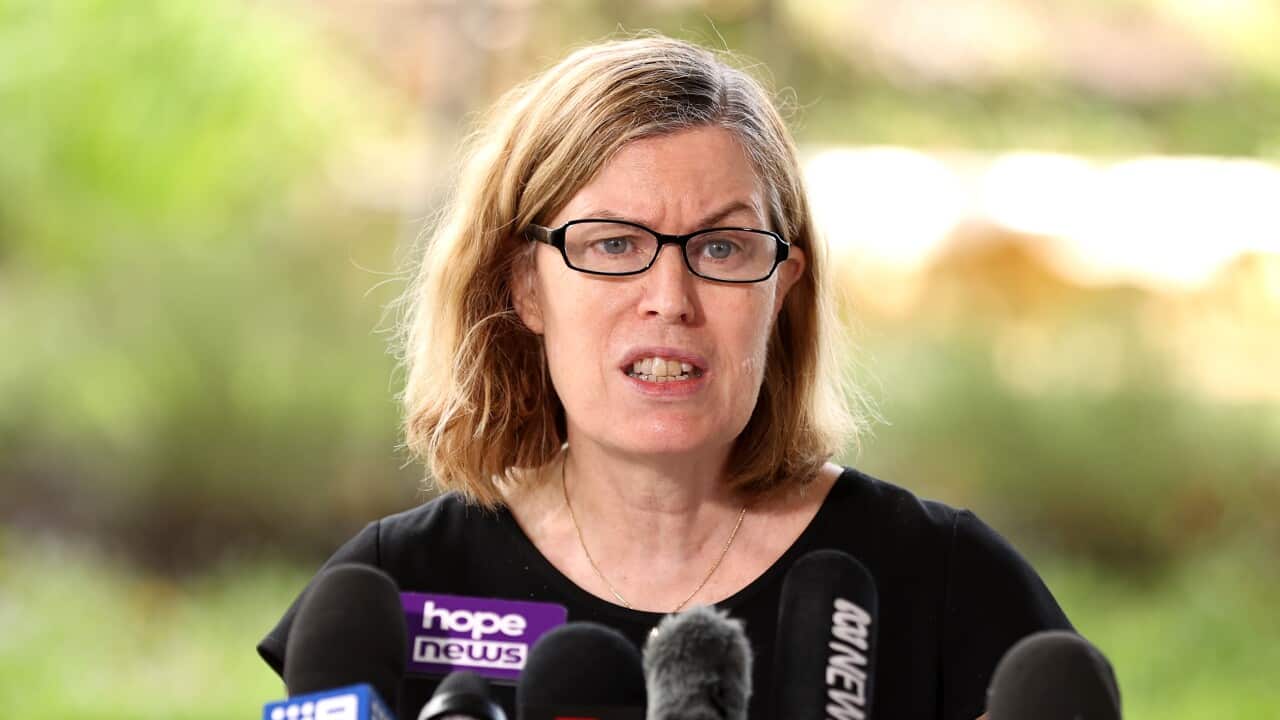 The number of COVID-19 deaths in NSW is likely to rise over the coming days due to the spread of the virus in the community, the state's chief health officer has warned.

NSW recorded 17 virus-related deaths on Monday and has seen increases in the number of people being treated in hospital and in intensive care.

Separately, statistics from Queensland show someone who is unvaccinated is 24 times more likely to end up in ICU compared to those who have had three doses, the state's chief medical officer said.

NSW Chief Health Officer Dr Kerry Chant, speaking to reporters in Sydney on Monday, said: "Given the broader community transmission of COVID, I would like to flag that the number of deaths (is) likely to be high over coming days.

"But the key message is those boosters will improve the protection.

"Only one of the 17 people that died had been boosted."

Dr Chant also reported that 95 per cent of samples taken in the past two days from a private pathology laboratory were the Omicron variant.

"We know that for the Omicron variant, having that booster is critical to upping your level of protection," she said.

"And we know that with both variants, even though the Omicron variant is milder overall, it still will have an incredible impact on people that are elderly and those with underlying conditions."

'We can't have never-ending lockdowns'

NSW Premier Dominic Perrottet cited the ICU numbers as he also pushed for people to get booster shots.

"If we look at the numbers today, 200 people in ICU, 50 per cent of those people in ICU are unvaccinated," he said.

"The evidence is clear - and that's why I continue to ask people right across our state: if you haven't received that booster shot, please go out and do it."

Mr Perrottet also said lockdowns would be a thing of the past, otherwise the pandemic would become "never-ending".

He said: "The best way through this pandemic is to push through.

Of the newly reported cases on Monday, 17,646 were traditional PCR tests and 11,858 were the results of at-home rapid antigen tests (RATs) reported to the government.

More than 1,000 of the RAT results were more than a week old, but newly reported through Service NSW.

The total number of positive results reported was 5,156 fewer than the day before.

NSW Police will on Wednesday officially begin enforcing a $1,000 fine for people who fail to report rapid results, although it remains to be seen how they will do so in practice.

READ MORE
How many people have died from COVID-19 in countries around the world?

Victoria yet to peak, CHO says

Victoria has recorded 22,429 new COVID-19 cases and six deaths as authorities say the state is nearing its Omicron infection peak, with a third of PCR tests confirming the presence of COVID-19.

The new infections confirmed by the health department on Monday include 12,059 from PCR tests and 10,370 from RATs.

It brings the total number of active cases in the state to 245,040, including a record 1,229 patients in hospital.

Monday's patient number is a 115 increase on the 1,114 reported on Sunday.

READ MORE
As COVID is allowed to 'let rip', these Australians are locking themselves back down

The number of people in ICU has grown by seven to 129 with 38 on ventilation, three more than the previous day.

However, with one in three PCR tests coming back positive, Chief Health Officer Brett Sutton warned hospitalisation numbers will continue to rise, as he predicted a peak may not be reached for a month.

He said there was a "lag" of about two weeks between case numbers and hospital admissions, and three weeks for that to translate to ICU figures.

"That will peak sometime in February, maybe mid-February, but it's hard to know until we really see what the peak in case numbers is going to be," he said.

State authorities have also begun handing out millions of RATs to essential workers and vulnerable people after the state government on Sunday received three million of the 44 million RATs it ordered.

He said eight community support organisations will receive $1.2 million in funding that aims to encourage vaccination among diverse communities.

"It's vital that multifaith and multicultural groups get the right information from people they trust at the right time," Mr Merlino said.

"Eight organisations ... are the successful recipients of this funding, which will help them deliver key services to make sure that no Victorians come across any hurdles or barriers to getting a vaccine [or] getting a third dose."

These organisations will help people in diverse and multicultural communities with a range of services, from helping people make vaccination bookings and organising childcare so parents can attend their vaccination appointments to organising transport to vaccination hubs.

The eight organisations will also work "with community and religious leaders to deliver vital public health communications in the right language at the right time", Mr Merlino said.

Seven deaths were reported in Queensland overnight with none of them having had a booster shot, Health Minister Yvette D'Ath said.

She added there were 702 patients in hospital, 47 in intensive care and 15 on ventilators.

"(It's) quite a jump, over 50 additional people in our public hospitals in the last 24 hours. Thankfully we don't see the corresponding increase in ICU," she said.

Dr John Gerrard, the state's chief health officer, said the deaths were two people in their 80s and five in their 90s. Two of them had not been vaccinated and five were double-vaccinated.

In the territory, 52 people are in hospital, four in ICU.

In the Northern Territory, two remote communities - Yirrkala in East Arnhem Land and Galiwin'ku on Elcho Island, also in Arnhem Land - will be locked down after 284 new cases were recorded.

And in South Australia, premier Steven Marshall said the outbreak was "very stable at the moment" as 3,829 new cases were recorded, but no deaths.

The number of people in hospital rose to 227, with 26 in intensive care where five people are on ventilators.

Mr Marshall said the current situation in SA was nothing like what the state was experiencing a few weeks ago when new infections were doubling every couple of days.

"It is very stable at the moment. We can't be complacent, we're still dealing with a highly transmissible variant," he said.

"But we are starting to see some very, very hopeful signs."

The Australian Competition and Consumer Commission (ACCC) has analysed more than 1,800 reports of price hikes on the essential item since 25 December, and is now averaging close to 150 reports a day.

Chairman Rod Sims says at the extreme end the watchdog had seen "outrageous" reports of tests costing up to $500 for two online and more than $70 per test at convenience stores, service stations and independent supermarkets.

On data available to the ACCC so far, suppliers and intermediate suppliers say wholesale prices are between $3.95 and $11.45 per test, depending on the type of test and volumes purchased.

"There are several businesses that have repeatedly come to our notice thanks to the information provided by the public," Mr Sims said in a statement.

"We are asking those businesses to urgently explain the prices they are charging."

Almost three-quarters of Australians say RATs should be free, while more than half believe governments have failed to adequately plan over the past two years to deal with challenges that have been thrown up by Omicron.

A survey by the Australian Institute found 72 per cent of respondents believe the federal government should provide RATs free to everyone, including two-thirds of coalition voters.

Just 16 per cent believe retailers should continue to sell them to individuals.