Abdul Aziz Muhamat was allowed to travel to Geneva where he was named the 2019 Martin Ennals Award Laureate. 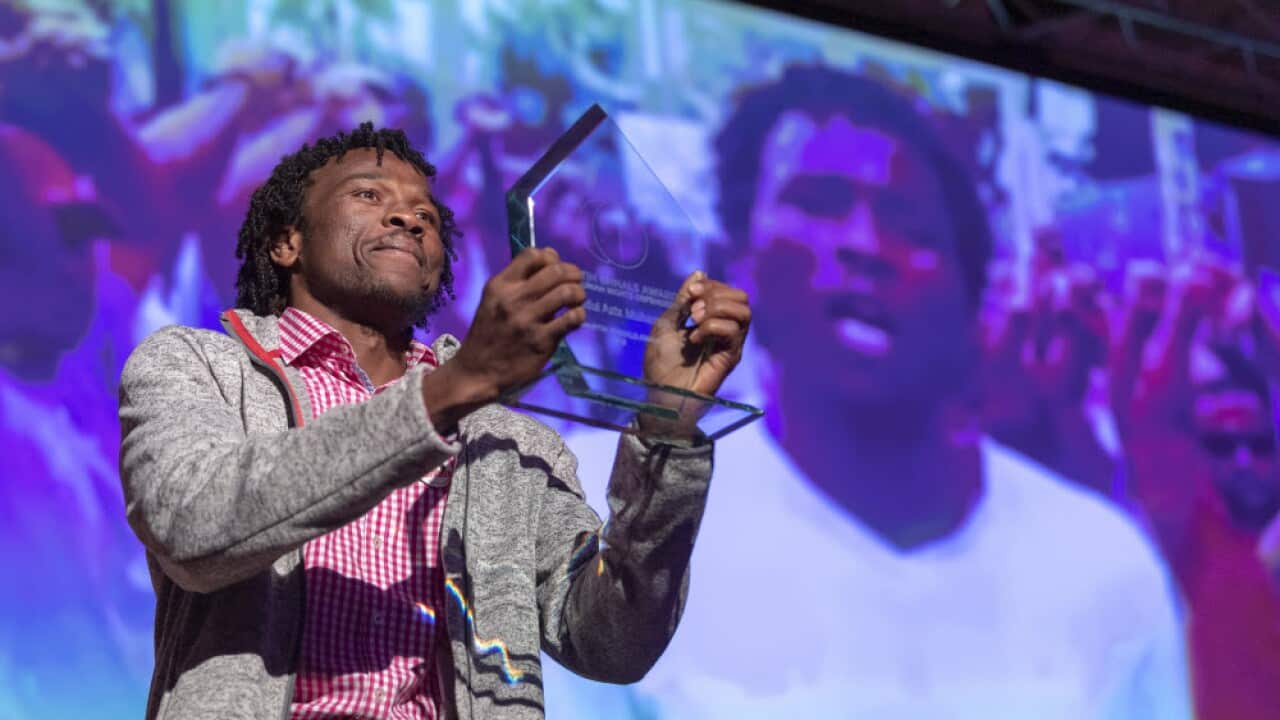 Abdul Aziz Muhamat, who has been on the island since 2013, was named the 2019 Martin Ennals Award Laureate at a ceremony in Geneva, Switzerland on Thursday.

The award honours individuals who have shown outstanding commitment to the promotion and protection of human rights, often working under threat of imprisonment, torture or worse.

Advertisement
Mr Muhamat speaks to international media outlets and tweets regularly from Manus Island, shedding light on, and condemning the quality of life in, offshore detention.

"I am honoured to accept this award on behalf of my brothers and sisters across the world who have been part of my journey … particularly, my best friends and the heroes on Manus Island and Nauru," Mr Muhamat said at the ceremony, which came four days before his 26th birthday.

"I'm a thousand kilometers away from Manus, but my thoughts are still on Manus."

“This young man was only 20 when he first arrived on Manus Island,” Dick Oosting, chair of the Martin Ennals Foundation, said.

“Since then, he never stopped raising his voice for those who have been stripped of their most basic rights together with him.”

How was he able to travel to Geneva?

Switzerland granted Mr Muhamat a temporary visa allowing him to travel to Geneva, and he will return to Manus Island soon after the ceremony, according to award organisers.

“He is one of very few refugees on Manus Island who has a Refugee Travel Document issued by Papua New Guinea authorities,” Michael Khambatta, Director of the Martin Ennals Foundation, told SBS News.

“He travelled on this document and was issued a Switzerland-only visa upon arrival at our request.

“He is planning to return to PNG on the 23rd of February.”

Swiss authorities have always been very helpful in ensuring finalists are able to travel to Geneva for the Martin Ennals Award ceremony, Mr Khambatta said.

‘He stood up to be counted’

The jury of the Martin Ennals Award - which comprises of 10 human rights organisations including Amnesty International, Human Rights Watch and the International Federation for Human Rights – praised Mr Muhamat for his advocacy.

"He and a few other courageous people are the reason we know what the horrible conditions are on Manus Island. It’s because of people like Abdul Aziz that message has reached across the sea,” said Leila Matar, the Deputy Director for United Nations at Human Rights Watch.

Abdul Aziz Muhamat with one of the award finalists, Marino Cordoba Berrio, and the director of the Martin Ennals Award, Michael Khambatta. Source: Supplied

"He stood up to be counted in conditions which would really suppress a lot of other people - even in the face of his actions limiting his chance of resettlement,” said International Federation for Human Rights board member Alice Mogwe.

Mr Muhamat beat two other people to be named the 2019 Martin Ennals Award Laureate, Colombia’s Marino Cordoba Berrio - a community organiser who is fighting for the rights of Afro –Colombians - and Turkish lawyer and human rights activist Eren Keskin, who is facing a prison sentence.

Ms Keskin was unable to attend the award ceremony in Geneva as she has been banned from travelling.