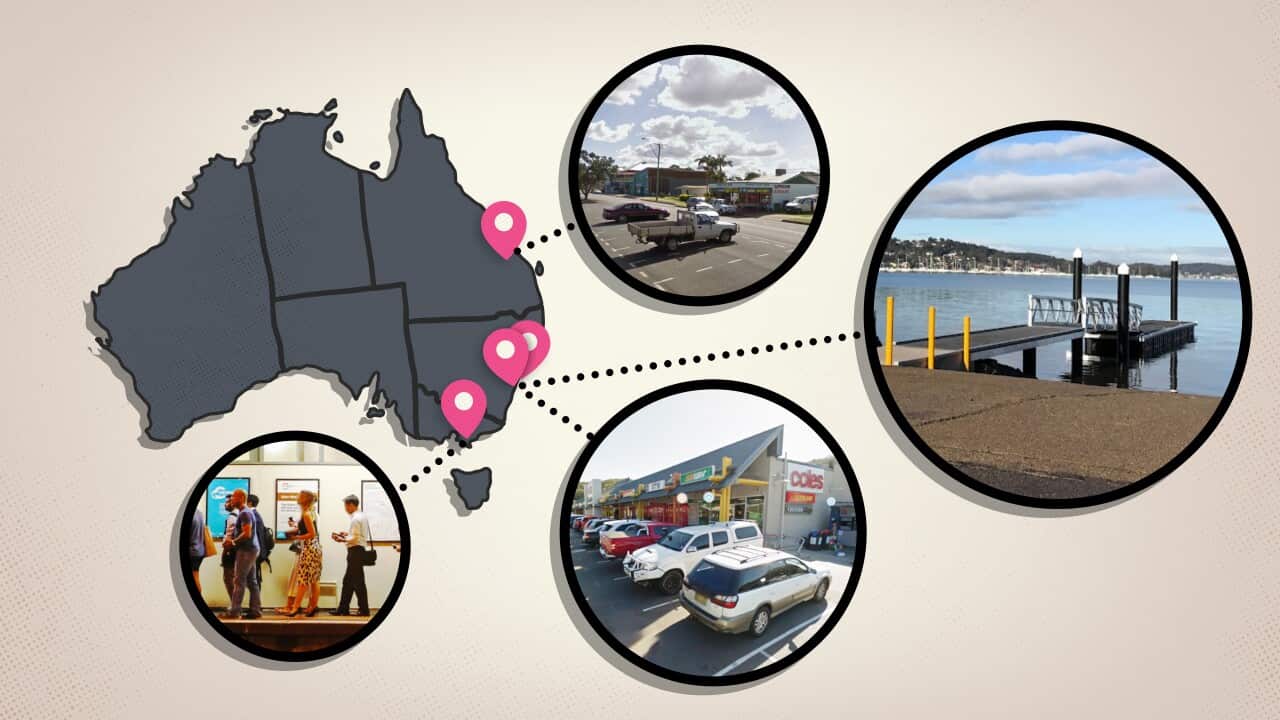 These Australian communities have picked the winner at every federal election

SBS News has mapped the places that have successfully picked the winning party at the past nine federal elections. Was yours one of them, and can they make it 10 this time around?

Published Monday 16 May 2022
By Amy Hall, Biwa Kwan
Source: SBS News
Australians will head to the polls on 21 May to decide their next government, and the modern-day voting patterns of some polling booths might be worth paying particular attention to.

There are a number of places in Australia that have accurately selected the winning party that ended up forming government for the past nine federal elections since 1996 - as far back as the Australian Electoral Commission (AEC) provides data for.

Often referred to as 'bellwether seats' in terms of electorates, polling experts say such places can be viewed like a weather vane, pointing to patterns in voting behaviour. The word bellwether refers to the historical practice of placing a bell around the neck of a castrated ram - a wether - leading a flock of sheep.

Advertisement
When looking at not just electorates, but individual polling booths, an analysis of the data by SBS News has revealed 31 'bellwether' booths that have consistently picked the winner on a two-party preferred basis. They include 11 in Victoria, 9 in New South Wales, six in Queensland, four in South Australia, and one in the Northern Territory.

And when looking at where there are clusters of at least two such bellwether booths within the same suburb or 'community', there are four such examples in Victoria and two in both NSW and Queensland.

The interactive map below pinpoints these places, with a full list and further analysis below.

The communities that got it right

They are Camelot Rise, Essex Heights, Glendal, and Mount Waverley North primary schools. The other – Glen Waverley South Primary School – was in the neighbouring electorate of Hotham, but after a boundary redistribution in 2021 is now also in Chisholm.

A large number of the residents in the area have Chinese ancestry - 33.9 per cent in Glen Waverley, and 22.4 per cent in Mount Waverley. Ms Liu - the first female Chinese-born member of Australia’s parliament - is again standing as the Liberal candidate for Chisholm in the 2022 election. Her main challenger is Labor’s Carina Garland.

The results coming out of those polling stations are particularly interesting because Shortland, the federal electorate they are part of, is held by Labor MP Pat Conroy.

He’s again facing Liberal challenger Nell McGill, while Kim Grierson is running for the Greens, Kenneth Maxwell for the United Australia Party, Quintin King for One Nation, Barry Reed for the Liberal Democrats, Bree Roberts for the Animal Justice Party and Basil Paynter as an Independent.

Pioneer Valley, Queensland
Mirani is a rural town in Queensland. Source: Google / Google maps.
In the Pioneer Valley near Mackay, there are another two booths that have voted for the party that formed government at the past nine federal elections. They are Mirani State School and Marian State School, which both fall within the seat of Capricornia, held by Michelle Landry from the LNP.

Other places of note

Other polling booths within the same electorate have also selected the party that ended up forming government in the past nine elections.

In South Australia, the booths include Church of the Trinity and Glenelg Primary School in the Adelaide electorate of Boothby, held by Liberal MP Nicolle Flint.

In Victoria, they include the tiny booths in regional Victoria of Darraweit Guim Primary School (average of 204 votes) and Kalkallo Fire Brigade Hall (average of 114 votes). Both are in McEwen, which is held by Labor MP Rob Mitchell.

Is it just a fluke?

Election analyst Dr Kevin Bonham has been studying Australia's federal elections, state elections and Tasmanian local elections for more than three decades. He says there are features that are distinctive about bellwether seats.

In particular, there is a high level of volatility between voter groups that can be split on factors including incomes, employment profiles and ethnicities.

"You get a lot of regional seats that are bellwether seats in the sense they have that sort of urban and rural mix that makes it hard for one side to dominate the other.

"And you will get some suburban sites that are in similar categories. They have the right mix of incomes or employment profiles or ethnicities, or whatever [factor] that make it hard for one side to gain a distinct advantage."
Liberal MP Gladys Liu holds Chisholm on a margin of 0.5 per cent. Source: Getty / Tracey Nearmy
Seats that are considered bellwethers can also change and lose that status, particularly when the AEC redistributes an electorate's boundaries, changing the composition of voters.

"I personally regard the history [of bellwether seats] as more of a curiosity. It is a not very reliably predictive thing. Sometimes a seat getting a long run of results the same way as who forms government can be a coincidence, rather than for any underlying reason," Dr Bonham says.

"There's always the possibility that these factors will change. We saw this with Eden-Monaro. That was Australia's most famous bellwether for a long time - and now it is no longer. That title now goes to Robertson [on the NSW central coast]."

For more than 40 years until 2013, the results in the NSW seat of Eden-Monaro, near the ACT, replicated the federal election result.

The competition for votes intensifies in battleground seats that could determine the election result.

For example, the 2019 results in the Victorian seats of Chisholm and Kooyong were examined in the Federal Court over the use of how-to-vote material used by the Liberal Party.

Chinese-language signs, which resembled the purple and white official signs from the Australian Electoral Commission, were posted at Melbourne polling booths in Chisholm and Kooyong.

The tight contest can result in a hung parliament, forcing the government of the day to govern as a minority government. Such was the case with Julia Gillard's Labor government between 2010 and 2013.
READ MORE
How does a hung parliament work and does it lead to instability?
The Coalition won the 2019 federal election - a third consecutive three-year term - with a one-seat majority in the House of Representatives.

"When it comes to the bellwether seats, these are the ones that we presume are coming from [the group of] marginal seats."

"These are the seats that are going to change hands and again being won by the party that goes on to eventually win the election.

"There is of course the prospect of neither major party winning the majority in their own right. And as a result, we'll have to try and negotiate with minor parties and independents, whoever is elected, to try and form a majority."

Sri Lankan-born Anjalee de Silva was elected in 2020 as a local Greens councillor in Victoria for the City of Monash, representing the Mount Waverley Ward. The area is in the Victorian seat of Chisholm, which has five polling booths that selected the parties that won the past nine federal elections.

She didn't know the area had picked the winning party so many times, but considering the diversity within the electorate says it isn't a surprise.

"It doesn't come as a huge shock to me."
Greens councillor Anjalee de Silva. Source: Supplied / greens.org.au
"What I think that reflects is that there is a diversity of voices represented here. And it's the kind of voter that hasn't necessarily made up their mind going into an election.

"In addition to multicultural diversity, there's a broad range of diversity in terms of people's socio-economic demographics, and people represented across a diversity of characterisations - and not just say, ethnicity, language and religion.

Liberal MP Gladys Liu holds Chisholm on a very narrow margin of 0.5 per cent, after winning it in 2019. Her win came after Labor MP Anna Burke, who held the seat for 18 years, retired from politics at the 2016 election.

The City of Monash local council area is culturally diverse - with 48.9 per cent of people born overseas, compared with 33.7 per cent in Greater Melbourne, according to the 2016 Census. Half of the residents in the local council area speak a language other than English at home.

"I think a lot of voters in those particular classes go into the election wanting to see what each of the parties are saying around particular issues that are of interest to them," Ms de Silva says.

"I would like to think at least that it means that people are voting according to policy and the issues that are important to them at the time, rather than coming into an election with a preconceived outcome in mind."

Sociology professor Andrew Jakubowicz at the University of Technology Sydney says bellwethers are interesting when analysed after election night and over time, but the immediate predictive value is less useful because of the complexity of Australia's electoral system and the use of preferences that favour the major parties.

"I wouldn't magically say if we get a result in Lindsay we will know exactly what happens to the election. I think it will go down to the wire far more. And it may be this time around [in 2022] that Lindsay is the indicator, it may be that it isn't."
READ MORE
Every seat Scott Morrison and Anthony Albanese have visited during the election campaign
He says the forecasting value of bellwether seats depends on voter engagement and even though voting is compulsory in Australia, 'informal' voting can skew results.

"I think part of the problem, at the moment, in a lot of seats with high multicultural populations, there is a
resentment of what has happened over the last few years
with the way in which the management of the pandemic has badly affected multicultural communities."

"And they don't necessarily want to support anybody. So we may, in fact, be seeing something like a fairly high rate of informal voting rather than people actually making a choice. So we'll see."

The Australian federal election will take place on 21 May.
See all SBS News' election coverage here.

Census 2021: Almost half of Australians had a parent born overseas