The Coalition maintains the Murugappan family from Biloela has not been granted “refugee status”, but Labor is promising to let the family settle permanently in Australia if elected. 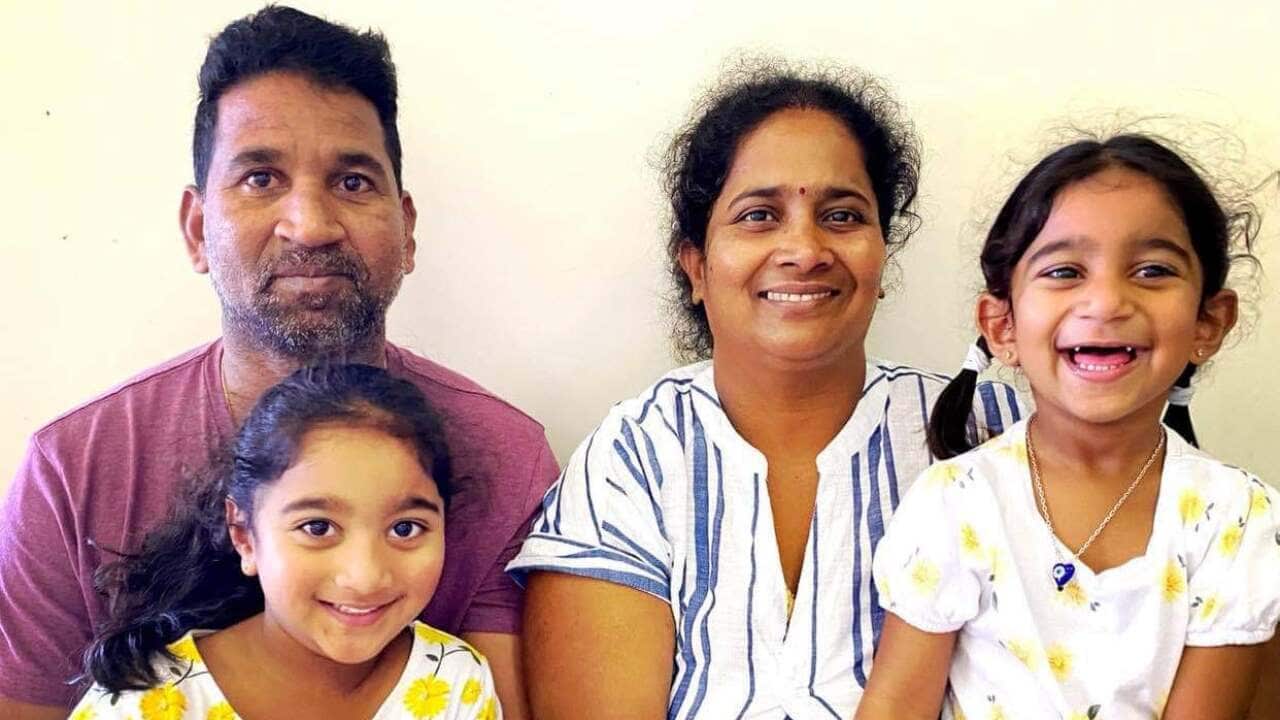 The fate of the Murugappan family will be decided by the result of the federal election, with the Coalition and Labor at odds over whether they should be granted visas to permanently remain in Australia.

Priya and Nadesalingam Murugappan, who arrived in Australia by boat, have been in a long-running fight to seek asylum since being removed from their home in the town of Biloela by Border Force officers in 2018 after their temporary visa expired.

The pair married in Australia after fleeing Sri Lanka’s civil war and arriving separately on people smuggler boats in 2012 and 2013, going on to have Australian-born children Kopika and Tharnicaa.

Advertisement
They were detained on Christmas Island in August 2019 after earlier detention on the mainland while they sought refugee status in the courts.
READ MORE
Pressure mounts on federal government to bring Biloela family home as election looms
The family of four had been living in Biloela since 2014 where Nades worked in the local abattoir establishing a place in the local community until Priya’s bridging visa expired on 4 March 2018.

The family has since then pleaded for ministerial intervention in their situation to grant them a permanent visa to remain in Australia. The Morrison government has refused to grant this request.

If Labor delivered on its promise to grant the family a permanent visa - through ministerial intervention - this would allow them to resettle in Biloela.

Angela Fredericks, who lives in Biloela and is friends with the Murugappans said because of this the family’s future rested on the outcome of the federal election.

“We’re all just growing incredibly tense and nervous not knowing what the result of the election is going to be,” she said.

“Ultimately the family’s fate rests on who ends up coming into power through this election tomorrow.”

The family are currently living in Australia on bridging visas after being moved to Perth after Tharnicaa, aged three, suffered a blood infection.

Because Tharnicca was not granted a visa the family has been required to remain here in community detention rather than moving back to Biloela.
READ MORE
Renewed calls for minister to intervene in Biloela family case following Djokovic revelation
The Morrison government has maintained the family has not been found to be refugees despite making numerous protection claims through the legal system.

Prime Minister Scott Morrison has stood firm on this, despite being questioned on his government's position on the family on the campaign trail over the past two days.

On Thursday, Mr Morrison was accused of misleading voters by supporters of the family by implying the government could not issue them permanent visas because of these ongoing court matters adding that there was "no protection owed" to the family.

Challenged about this on Friday, Mr Morrison explained his response.

“There's two tracks here,” he told reporters on Friday.
READ MORE
'No protection owed' to Biloela's Murugappan family, Scott Morrison says, as Labor outlines policy costings
“There's the track in the courts and those courts have not found that under the refugee convention that a protection obligation is owed under that convention.

Mr Morrison said his government's position remained to never to grant visas to “people who have illegally entered Australia” claiming this would risk reigniting the people smuggling trade of boat arrivals.

Labor’s campaign spokesperson Jason Clare on Friday accused Mr Morrison of showing a lack of empathy in response to the family’s situation.

“He's empathetic without the ‘em’,” he told the ABC.

“He won't bring the Biloela family home, back to Biloela.”
READ MORE
As Australians head to the polls, these are the seats that could decide the federal election
Deputy Prime Minister Barnaby Joyce has called in the past for the family to be returned to Biloela and said as recently as 24 April his position had not changed.

A government spokesperson on Friday told SBS News: ”The family has a number of other ongoing legal matters. It is therefore inappropriate to comment further.”

But Ms Fredericks said offering the family certainty to remain in Australia was about showing human decency.