Authorities have been working to ensure the bushfire-ravaged town of Balmoral is safe before residents are allowed to return to grieve the damage and loss.

The small village of Balmoral southwest of Sydney has been all but wiped out by the Green Wattle Creek firestorm that roared through the area twice in three days.

Damage assessment teams are combing through the village before authorities give the green light for residents to return.

"We've got the devastating news there's not much left in the town of Balmoral," Premier Gladys Berejiklian said in nearby Picton on Sunday. Burnt-out property after the Green Wattle Creek Fire. It's feared 40 homes have been lost to bushfires that tore through Buxton, Balmoral, Bargo and surrounds.
AAP

"Very sad to hear that. Many residents have had that news in the last little while. Communities like Buxton and others have also been very hard hit."

The premier said some residents would be allowed to return to their properties "today or tomorrow" but others could have to wait longer. Another man missing near Lithgow as blaze claims several buildings

Assessment teams are going in to determine when it will be safe for people to go home.

"If people have lost their properties they still want to go back to see what's left and if there is anything they can salvage," Ms Berejiklian said. Emergency services say little remains of the village of Balmoral after the fires.
AAP

"We know that's part of the recovery. We want people to have access to their land as soon as they can but it has to be safe."

The Liberal leader said the devastation was "shocking".

The community was already reeling after being hit on Thursday when the flames returned on Saturday as the state faced catastrophic fire danger.

Balmoral, in the Wingecarribee Shire Council area, consists of about 150 houses with a population of some 400 people.

Matthew Deeth - who's the mayor of the neighbouring Wollondilly Shire Council - says everyone knows everyone in the small village. 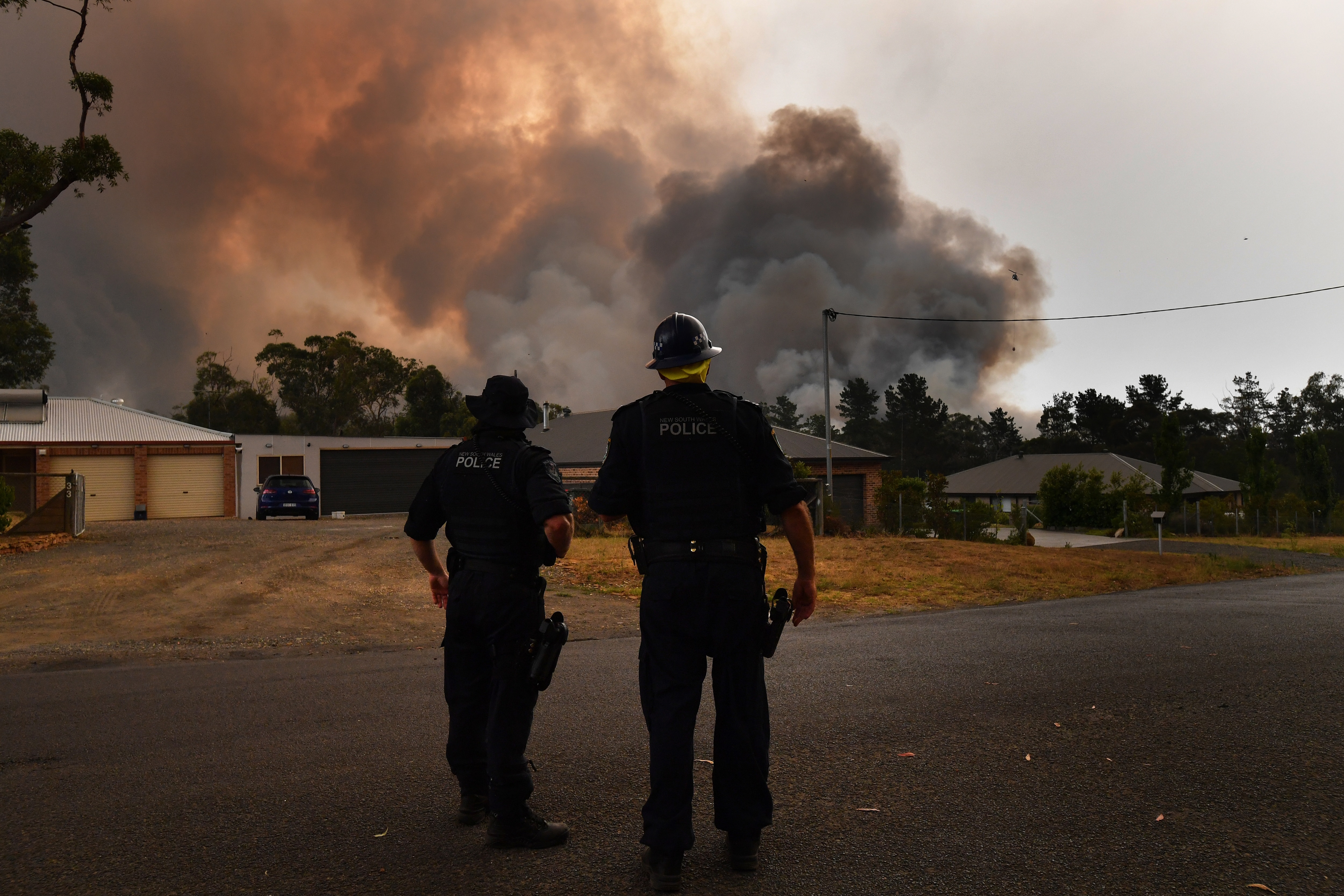 NSW Police watch as the Green Wattle Creek Fire threatens homes in Yandeera in the south west of Sydney.
AAP

"They were all banding together until they got hit yesterday and they were just decimated," Mr Deeth told AAP on Sunday. "Most people were pulled out of their houses and if there was nobody defending houses they kind of just all lit up."

Mr Deeth has friends in Balmoral whose home was slightly damaged "and it's about one of a handful of houses still standing".

The mayor said he was in the local RFS shed that was sheltering people during Saturday's inferno and "they're just absolutely gutted - the shock on their faces".

The federal and state governments have extended emergency relief funding to the Wingecarribee and Wollondilly council areas.

A dozen councils areas across NSW now have access to more than $60 million in joint funding, Ms Berejiklian said on Sunday.

"We're not just here today and tomorrow. We'll be with you in the weeks and months and - in some communities - years during the rebuilding process."

NSW Rural Fire Service Commissioner Shane Fitzsimmons earlier said "dozens" of homes may have been lost when bushfires raged across NSW on Saturday.

Most of the losses were from the Green Wattle Creek fire, the huge Gospers Mountain blaze northwest of Sydney and the Currowan bushfire on the South Coast.

"We are expecting another heavy toll unfortunately with estimates that property loss could be in the dozens of buildings including homes, outbuildings, sheds and businesses," Mr Fitzsimmons told reporters in Sydney. 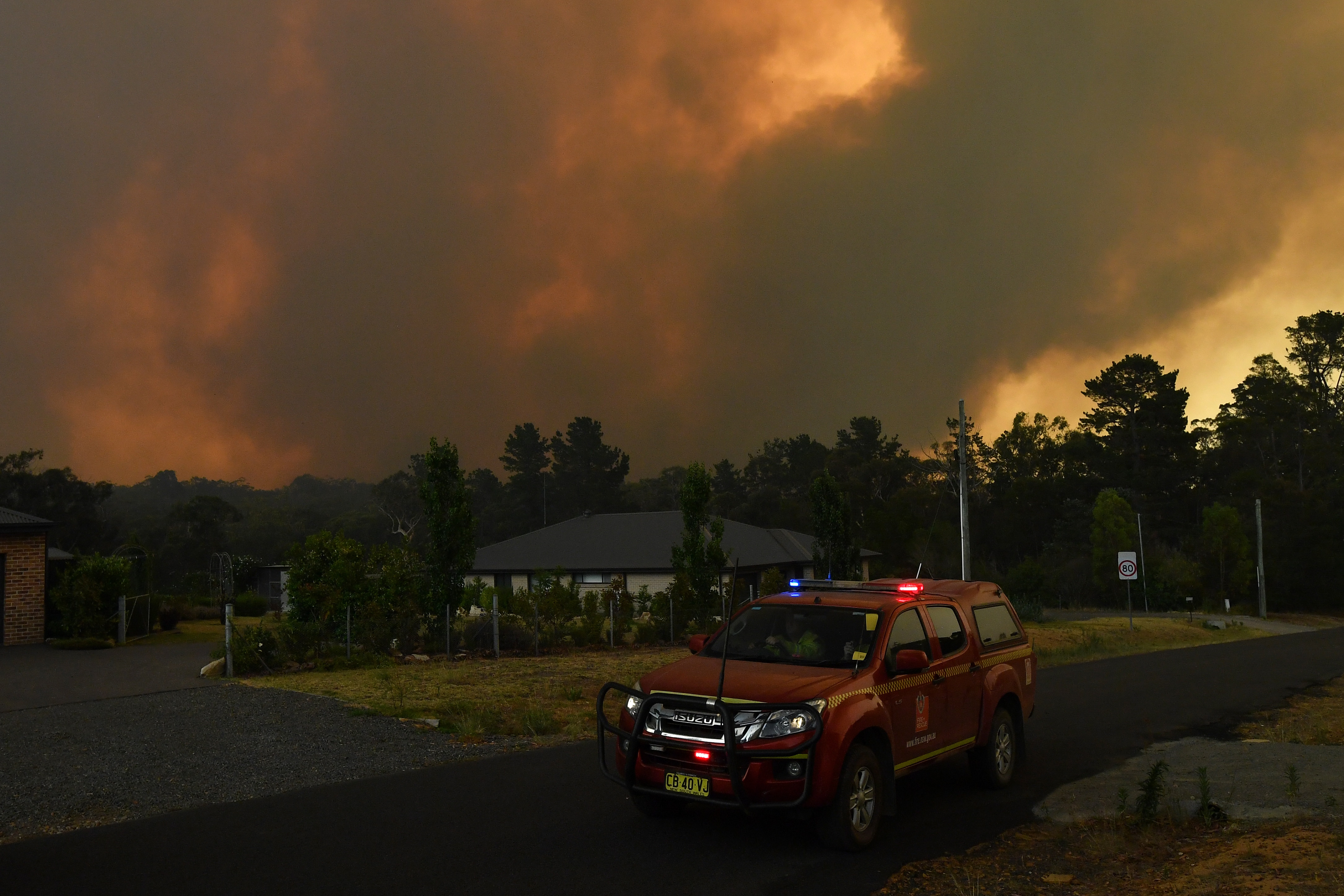 "Around the Balmoral village, we had two fire fronts come together and they merged," he told ABC TV at the time.

"We were experiencing firestorm-type conditions."

Volunteer RFS firefighters Geoffrey Keaton, 32, and Andrew O'Dwyer, 36, died later on Thursday night when a tree fell into the path of their tanker in neighbouring Buxton.