Saturday’s deadly tsunami in Indonesia’s Sunda Strait is the latest in a long string of natural disasters that has struck the island country.

Just days before Christmas, Indonesia has once again been thrown into chaos after a deadly tsunami smashed into the coastline of the Sunda Strait, killing at least 281 people and injuring more than 1,000.

The latest disaster follows a tragic year for Australia’s neighbour, with almost 3000 people killed in three separate earthquakes and tsunamis in 2018. The deadliest of these hit the city of Palu, in Sulawesi, in September, killing more than 2000 people.

Indonesia's high frequency of tsunamis and earthquakes is due to its location. The archipelago straddles the so-called Pacific ‘Ring of Fire’ – the spot where four tectonic plates meet.

The ring – which is actually horseshoe-shaped – stretches for 50,000km around the rim of the Pacific Ocean, with the majority of the world’s volcanic and earthquake activity happening along this belt.

When two tectonic plates collide and one plate slips under the other into the Earth’s interior, the process – called ‘subduction’ – can form a volcano. The latest tsunami stemmed from one of these volcanoes – the 305m high Anak Krakatau, which forms a small island in the Sunda Strait between Java and Sumatra.

Indonesia’s geophysics agency said the volcano, which has been erupting since June did so again roughly 24-minutes before the tsunami hit. Unlike previous disasters, there was no earthquake to signal a wave was incoming.

This time, scientists say the tsunami may have been caused by a possible landslide on the slope of the erupting Anak Krakatau. 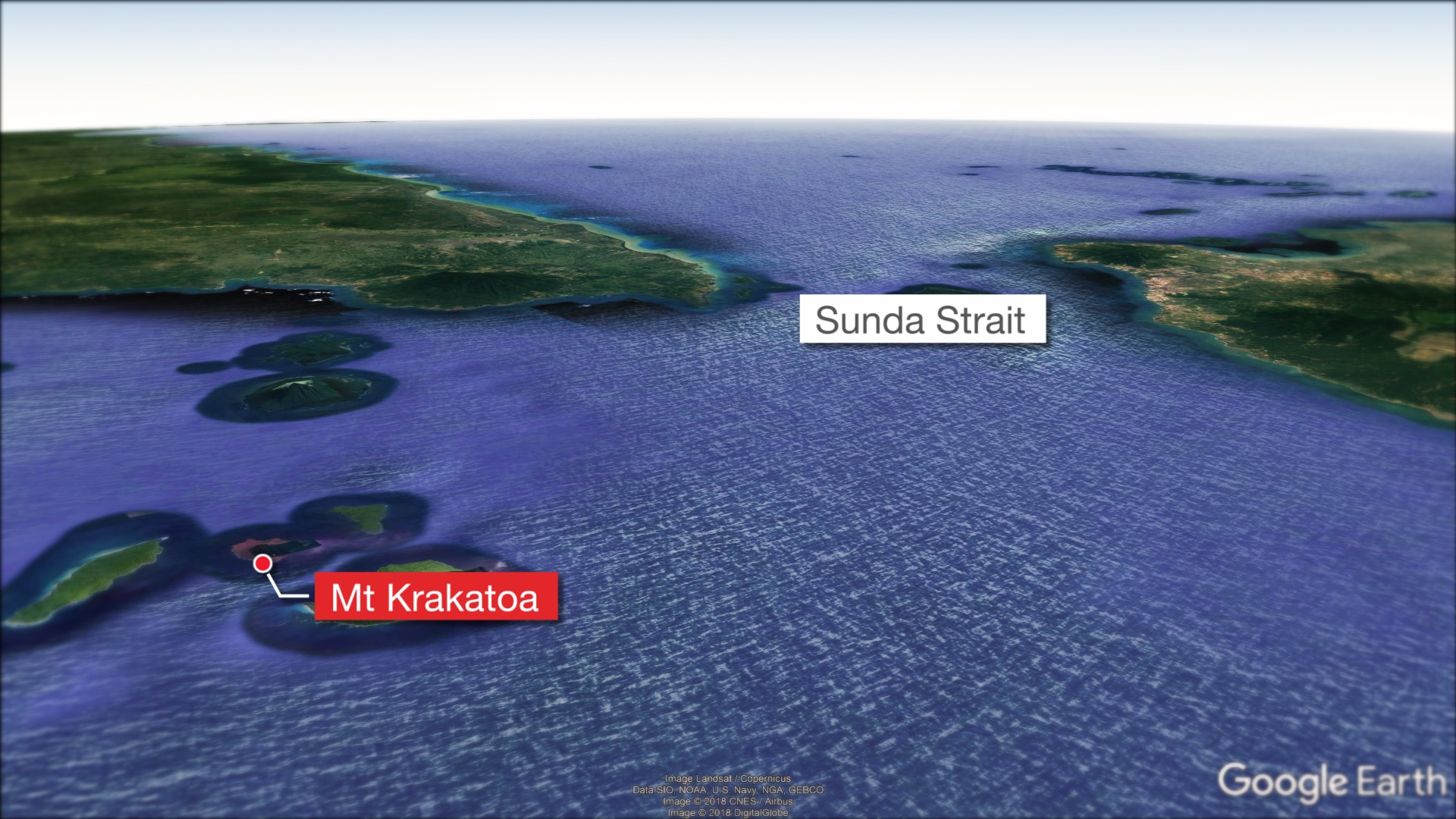 The location of Anak Krakatoa in the Sunda Strait.
SBS News

It is not the first time the volcano has been the cause of mass destruction. In 1883, an eruption of Krakatau was deemed one of the most catastrophic disasters of modern times after it almost destroyed the island entirely and killed more than 36,000 people. Anak Krakatau – meaning ‘child of Krakatau’ – formed in its place.

When disaster has struck Indonesia

September 2018: More than 2000 people were killed when a powerful earthquake and tsunami hit the city of Palu, on the west coast of Sulawesi island.

December 2016: A shallow earthquake hits Pidie Jaya regency in Aceh, causing mass destruction. While no tsunami was triggered, more than 100 people were killed by collapsing buildings.

October 2010: A 7.5 magnitude earthquake hit one of the Mentawai islands, located off the coast of Sumatra, triggering a tsunami that reached 10m and killed around 300 people.

September 2009: More than 1100 people were killed when a 7.6 magnitude earthquake struck near the city of Padang, which is the capital of the West Sumatra province.

July 2006: A 6.8 magnitude quake hits the south of Java, triggering a tsunami that smashes into the southern coast, killing nearly 700 people.

May 2006: A shallow quake hits the area around the ancient royal city of Yogyakarta in Java, killing at least 5,500 people and destroying or damaging 150,000 homes.

December 2004: A huge 9.1 magnitude earthquake on the western coast of the Aceh province in northern Sumatra triggered a massive tsunami that hit 14 countries, killing 226,000 people – 168,000 of these in Indonesia. Now known as the Boxing Day tsunami, it is believed to be the deadliest tsunami in history.