Despite scientists and health authorities already correcting misinformation, conspiracy theories linked to the coronavirus are continuing to spread online.

Since the coronavirus pandemic began, social media has become increasingly flooded with conspiracy theories seeking to explain how it originated and why.

The theories have ranged from stories suggesting COVID-19 was accidentally released from a lab in Wuhan, China to insisting 5G technology is the true cause of the infection.

On the weekend, the discussion moved from the internet to the streets of Melbourne, where about 100 people gathered outside parliament to protest against 5G, vaccinations, Victoria's lockdown restrictions and what they called the "coronavirus conspiracy”.

So why are these theories spreading so quickly - and why are people so willing to believe them? Protesters gather outside Parliament House in Melbourne on Sunday.
AAP

University of Melbourne sociologist Robin Canniford is part of an international research team studying the spread of conspiracy theories online.

While conspiracy theories are no new phenomenon, Mr Canniford said people are particularly susceptible to believing them during heightened times of anxiety such as the coronavirus pandemic. No, 5G radiation doesn’t cause or spread the coronavirus. Saying it does is destructive

“Just as there’s the psychological fight or flight response to fear that is hardwired into us, humans have also always made up stories to explain things that are threatening to them or that they don’t understand,” he told SBS News.

“People start asking questions, levels of distrust are raised and, all of a sudden, these alternative explanations start becoming more prevalent and people start saying ‘this is being organised, this is real’.”

Conspiracy theories about new technology have existed as long as the technologies themselves, with similar claims around the dangers of 3G, and even electricity, accompanying their inventions.

While theories about 5G technology and COVID-19 have each existed in their own realm previously, recent weeks have seen the two brought together, with online groups of "truth seekers" claiming one causes the other.

Mr Canniford said this type of hybridisation of conspiracies stemmed from the belief those who hold power control everything.

“It is unsurprising that these issues get linked by ‘truth-seeking’ communities, because one of the key tropes of these groups is the belief that power is handled by a few people at the top of a pyramid,” he said.

“So of course everything has to be linked, because there is always the ultimate source of evil at the top of the scale organising everything else.”

Why are these theories spreading so rapidly?

The world’s mass uptake of social media over the past two decades has meant conspiracy theories that once existed on the fringes of society have now been given a mainstream platform.

Instead of intentionally seeking out alternative ideas and explanations, Mr Canniford said a person only has to log onto Facebook to stumble upon them. A woman holds up a placard at a coronavirus anti-lockdown, anti-vaccine, anti-5G and pro-freedom protest in London.
AP

“Psychologists call this an availability heuristic - that is to say that, once upon a time, if you had a fringe notion of what was going on in the world, you might have been the only person in your neighbourhood or city who thought that,” Mr Canniford said.

“The internet now allows us to reach out across these horizontal networks and gather with people who feel the same, so all of a sudden you’re at the centre of your own normal curve, which is very powerful.”

“We tend to get what we call ‘heroic actors' who are keen to build new explanations and reveal the real truth,” he said. Coronavirus fake news is being fuelled by the top and bottom of society, says Australian expert

“What’s interesting to me is they are often presented as a quasi-scientific method, almost like citizen science … but it can undermine trust in government institutions and public health organisations.”

While some intentionally seek out conspiracy theories as a way to explain their concerns and anxieties, what about people who accidentally come across these theories online?

Psychology lecturer Eryn Newman from the Australian National University said the more people encounter these theories, the more difficult it can become to sort the truth from the lies. “The brain has a bit of a task in sorting fact from fiction, so people tend do to the sensible thing like draw on their general knowledge to establish if the information they encounter matches or mismatches with what they already have in their memory,” she told SBS News.

“But you can have familiarity in the context of just straight repetition, so the more times you encounter a claim or idea, the more familiar it feels and the more likely you are to categorise that claim as true.”

So how can people protect themselves from believing misinformation online?

According to Ms Newman, online content designed to debunk or correct mistruths can even have the opposite effect by presenting the information over and over. 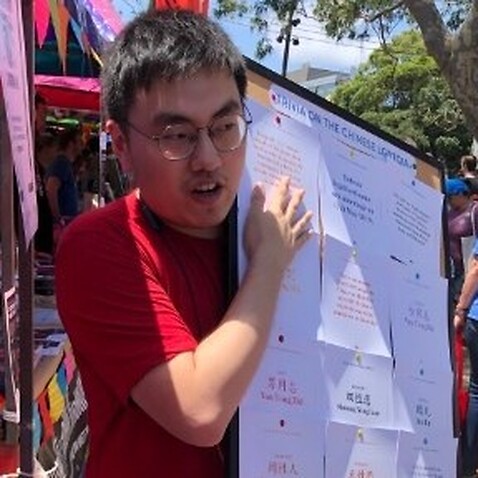 She said the best method is to reduce your exposure to the misinformation as much as possible by getting your information from “high trust” sources such as federal health websites.

“Because we consume so much information, when we finish an article and go onto the next, our memory system doesn’t work like a live feed giving moment to moment updates to our cloud, which is the brain,” she said.

“It’s much more reconstructive, so sometimes we lose bits of information over time and we lose the nuance and the details, and that’s why it’s risky for us to trust our memory in terms of tracking which information is accurate or not.”