As some refugees and asylum seekers approach one year of being detained in Australian hotels, questions are being raised about what plans are in place to find a permanent solution for the men.

When refugee Farhad Rahmati was transferred to Australia for medical treatment after six years in immigration detention on Manus Island, he believed it would be a fresh start.

“I thought let’s forget about what’s happened in the last six years and look forward to a beautiful future,” he said from Brisbane Immigration Transit Centre (BITA), where he was transferred after spending almost a year detained in a motel at Brisbane’s Kangaroo Point Central Hotel.

“Then after a few months here, I realised, no that’s not the case. This game, the main rules of the game, are still applied whether you are on Manus, Nauru or here in different detention across Australia.”

Before he was recently transferred, the civil engineer from Iran was one of more than 180 refugees and asylum seekers being held in hotels in Brisbane and Melbourne after coming to Australia from Manus Island and Nauru under medevac legislation. Farhad Rahmati was one of almost 200 men held in immigration detention in hotels.
Supplied

Recent protests inside and outside the Kangaroo Point and Melbourne Mantra hotels have put the spotlight on the makeshift detention centres, referred to as “alternative places of detention” or APODs by the Department of Home Affairs.

For weeks, protesters have gathered outside the Kangaroo Point Hotel, joining detainees as they hold signs on their small balconies - the only outdoor space they’re able to access - with further protests planned for Sunday, the seventh anniversary of the reinstatement of offshore processing.

At Kangaroo Point, the Department of Home Affairs has now taken over the entire private facility to house detainees, recently erecting a fence around the property. But despite pressure from the public, it is still unclear whether the government sees the hotels as a permanent solution.

“There is no exit strategy,” said Bari Phatarfod, a Sydney general practitioner and the founder of Doctors for Refugees, an organisation that reviews the health care being provided to asylum seekers and refugees.

“None of the governments that have come in, and as you know we have had a bunch over the past 10 years, none of them have actually thought to plan ahead as to what we are going to do with these individuals that are now in indefinite detention."

Speaking on ABC’s Insiders last week, acting Immigration Minister Alan Tudge said the nearly 200 men in the hotel detention had three options: to pursue resettlement in the United States, to return to Nauru or Papua New Guinea, or to return to their home country. 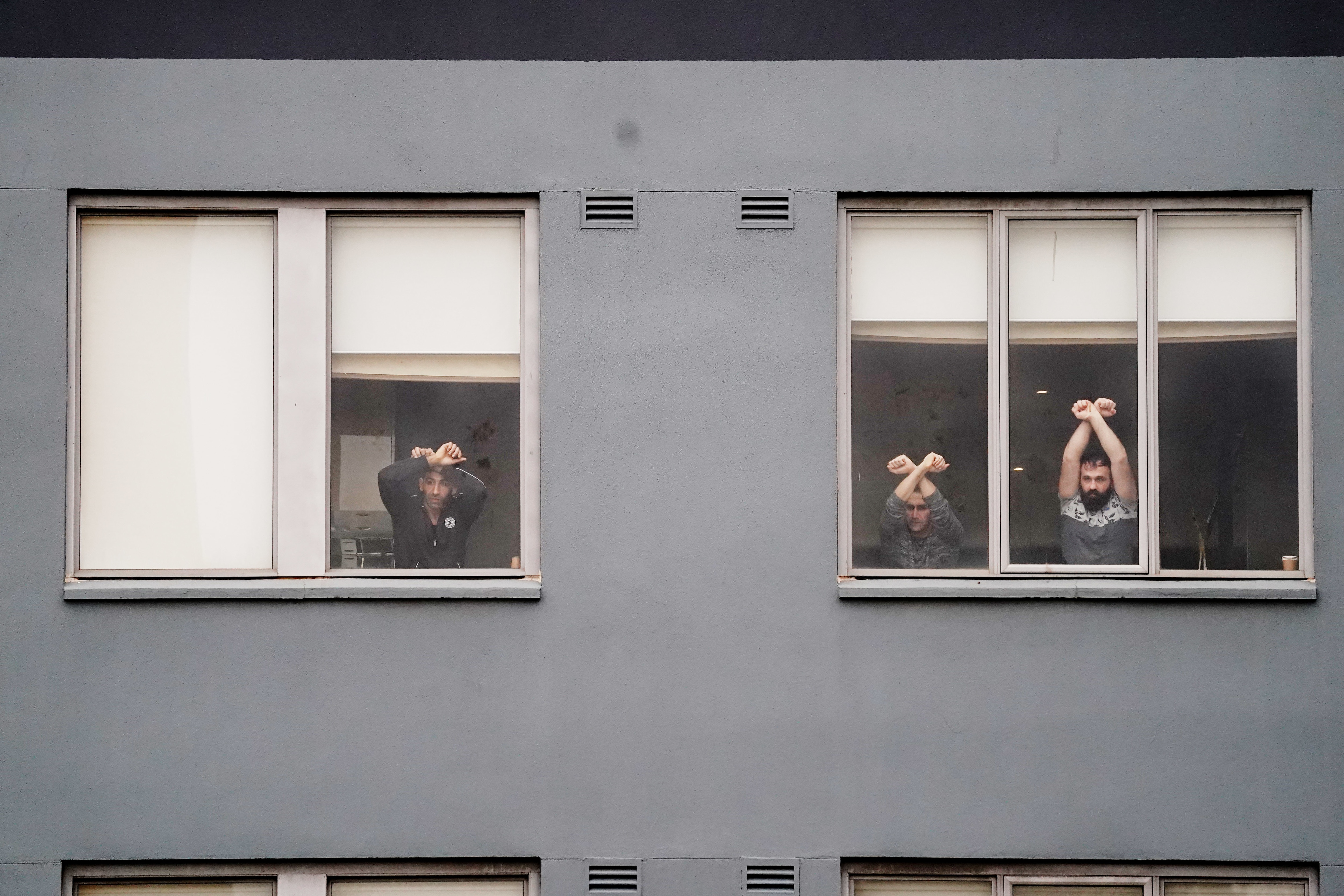 Detainees inside the Mantra Hotel in Melbourne in June.
AAP

“We’ll keep them in the hotels in detention until they exercise one of those options,” Mr Tudge said. “We’ve always been very clear that people don’t get the right to come permanently into Australia.”

In a statement to SBS News, a Department of Home Affairs spokesperson echoed Mr Tudge’s comments, stating: “Transitory persons are encouraged to engage in third country migration options, including resettlement in the United States, or return to a regional processing country or their home country.”

According to government figures from June, 185 asylum seekers and refugees remain on Nauru, while another 187 are in Papua New Guinea. This is after 184 men were transferred to Australia from offshore detention between March and December 2019 under the now-repealed Medevac legislation, the Department of Home Affairs said.

Prior to this, however, other mechanisms existed to allow refugees and asylum seekers to travel to Australia for medical treatment. 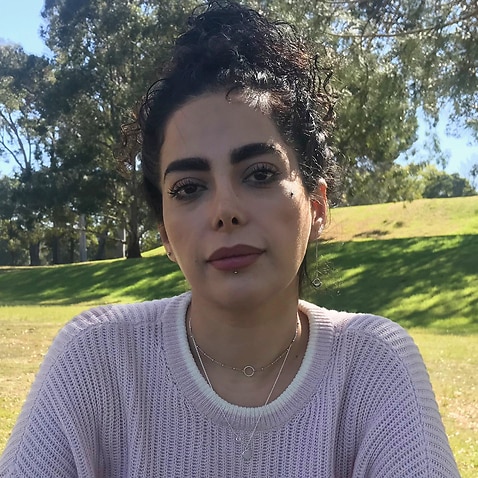 Many of those people, including women and children, are now living in community detention in Australia while they undergo medical treatment or wait for their visa or settlement application to be finalised.

Madeline Gleeson, a senior research associate at the University of NSW’s Andrew & Renata Kaldor Centre for International Refugee Law, said there is no reason why the men in hotels couldn’t also be released into community detention while they await their next steps.

“There’s no sound reason why these men need to be held in hotels in the way they have been,” she said. “There is room for them in the community, and they could be held there while waiting to receive medical treatment, while waiting for a determination on their visa status, or perhaps while waiting to see if they might get resettled in the US.”

Australian Human Rights Commissioner Ed Santow has also pushed for refugees and asylum seekers who came to Australia for medical treatment to be released from immigration detention unless "there are serious security concerns about someone".

"That's what the vast majority of other countries do when dealing with people who are seeking asylum," he said.

The concept of an APOD was built into the offshore immigration legislation passed in 2013 as an administrative framework to allow refugees and asylum seekers to be held in temporary locations outside immigration detention centres, such as a transit hotel or a hospital room.

“They were previously used for certain vulnerable groups of people whose needs could not adequately be met in other facilities like formal immigration detention centres,” Ms Gleeson said.

There has been a shift, however, she added, which now sees motels being used as “if they are immigration detention centres” to hold people for indefinite periods. After medevac was scrapped, what now for the sick refugees stranded on Nauru?

A week ago, Mr Rahmati was transferred from the Kangaroo Point hotel to the Brisbane Immigration Transit Accommodation (BITA), a nearby formal immigration detention centre, a move he believes is retaliation for him speaking to the media.

At BITA, unlike at the hotel, he now has access to an outdoor yard and a gym. But “at the end of the day, a cage is a cage. It doesn’t matter where we are,” he said.

Many human rights advocates have expressed concerns about the use of hotels and motels in this capacity, as they are not built with long-term detention in mind.

“The way that immigration detention centres are used in Australia is also very problematic, but they at least have certain facilities, policies and practices in place to ensure more adequate conditions than are afforded to people who are held in motels or hotels, which absolutely were not built for the purpose of holding people long term,” Ms Gleeson said.

Some detainees, like Mr Rahmati who arrived on the mainland almost a year ago to the day, have spent more than 12 months in hotel detention, sharing the small rooms with one or two people.

While detainees in the Kangaroo Point hotel have access to a small balcony, those in the Melbourne Mantra do not.

“They are confined to a small room for up to 20 hours a day,” Dr Phatarfod said. “If you do leave your room, you get patted down, frequent checks … it’s an incredibly oppressive environment to live in for 12 months.”

Mr Rahmati also said he is yet to receive the medical treatment that was recommended by specialists prior to his transfer from Manus.

This is in line with the experience of Dr Phataford, who said the “overwhelming majority” of people they speak to have not received the treatment they were brought to Australia for. Under international and Australian law, refugees cannot be returned to a country where they would face persecution, torture, or death.

“Rather than having people arrive at our shores, undertake a fair, efficient and effective process to determine whether they are or are not refugees, and then allow those who are refugees to remain and those who are not to return to their country when it is safe to do so, we have enlisted our Pacific neighbours in a policy that has been going for almost eight years now and has seen no good results in the sense that we still have people stuck in limbo,” Ms Gleeson said.

“Australia has said 'you can’t stay here', but we have an obligation to find a settlement outcome for them.” Mr Rahmati is currently in the process of applying for resettlement in the United States, the only third-country option available after the Australian government rejected New Zealand’s offer to take in 150 refugees.

Despite being eligible for third-party settlement, Mr Rahmati said he’s aware the application process will likely take years, ensuring his detention will not end anytime soon.

“Imagine yourself in my shoes, being in a situation for seven years when you have no idea what’s going to happen in your life in the next 10 minutes, that’s torture for all of us,” he said. “All I want is my freedom, I think after seven years I deserve my freedom.”