Pressure is building on Australia to follow allies such as the United States and New Zealand in taking direct action against the military junta behind the coup in Myanmar. 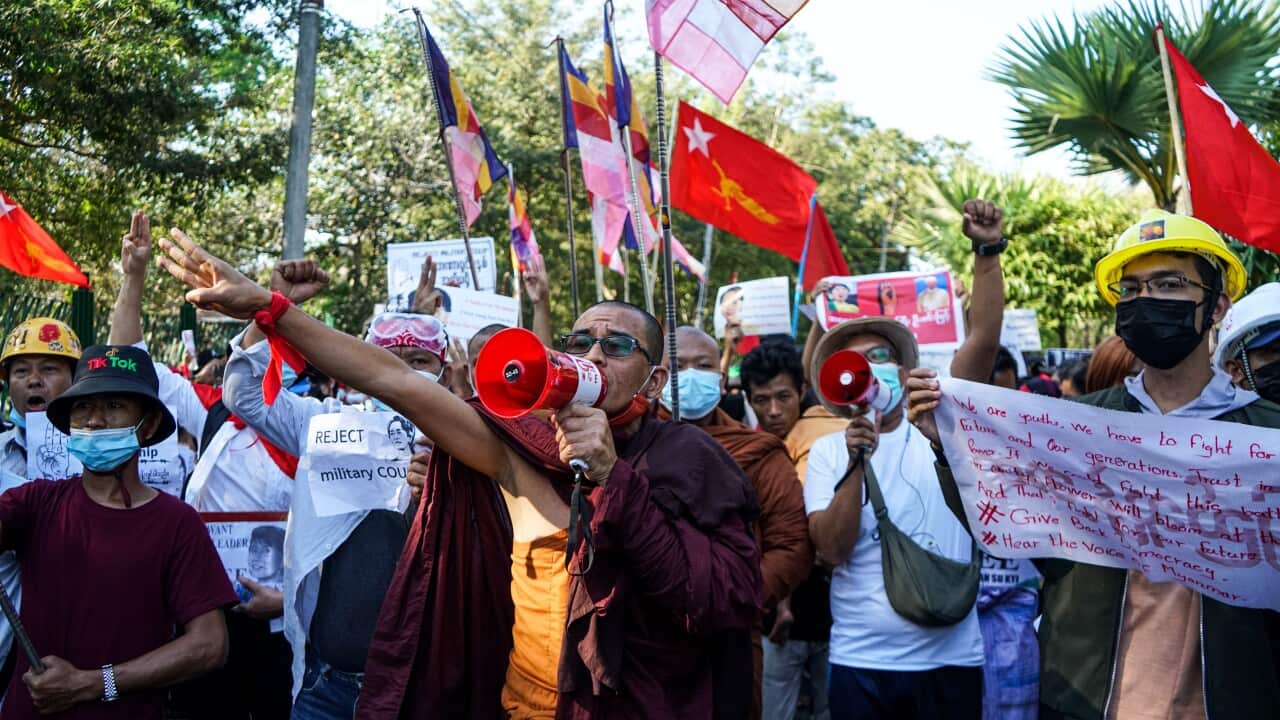 Australia is under pressure to take a stronger stand against the military junta behind the coup in Myanmar as global allies commit to further action.

It comes after US President Joe Biden announced new sanctions targeting the Myanmar generals behind the detention of democratically-elected leader Aung San Suu Kyi and others.

New Zealand has suspended all high-level contact with Myanmar, imposed a travel ban on military leaders and vowed its aid program would not support the military government.

Advertisement
Police use water-cannon to disperse demonstrators during a protest in Mandalay, Myanmar. Source: AAP

The Australian government is yet to commit to specific action against the military regime beyond expressing its deep concern and promising to review military and aid ties.

“We would urge Australia to act quickly and swiftly and to impose targeted sanctions on individuals in the Myanmar military,” she told SBS News.

“Now with concerns about a further clamp down on human rights - the situation in Myanmar is only going to get worse and so targeted sanctions are necessary to put pressure on the military.”

Thousands have taken to the streets in Myanmar to protest
the military takeover led by General Min Aung Hlaing
, with other smaller demonstrations also taking place in Australia.

The protests have increasingly been marked by conflict - with military authorities using tear gas, water cannons and rubber bullets to disperse protesters.

Mr Biden on Wednesday signed an executive order that would enable his administration “to immediately sanction the military leaders who directed the coup, their business interests as well as close family members”.

The president has also promised to prevent the generals accessing $1 billion of Myanmar government funds held in the United States.

Mr Biden said the United States would be ready to impose additional measures and would work with other countries to pressure the coup-makers.

Activist group Justice for Myanmar has also called for Australia to join the United States in applying increased pressure against Myanmar's military and their business interests.

“We call on Australia to stop dragging its feet and place immediate, targeted sanctions against military-owned businesses and their significant business associates,” Justice For Myanmar spokesperson Yadanar Maung said.

“It is not too late for Australia to act and stand with the people of Myanmar who are call for federal democracy and peace.”

Foreign Affairs Minister Marise Payne has not ruled out further sanctions - saying the process is “under regular review".

The Australian government has imposed sanctions and travel bans on five Myanmar generals accused of leading a crackdown on the country’s Rohingya minority in 2017.

In the past it has imposed sanctions on Myanmar in response to concerns about the military's failure to recognise previous election results.

“The United States and New Zealand have both announced clear responses to the coup in Myanmar, including cutting military ties and expanding targeted sanctions against key generals,” she said.

“If Myanmar’s generals refuse to release those who are arbitrarily detained, the Australian government should explore further options.”

Australia has promised to review training and education programs with Myanmar’s military after spending almost $1.5 million on the country’s armed forced over the past five years.

It has also expressed concern over the Myanmar’s military detention of Australian economist Sean Turnell – an advisor to Aung Saan Suu Kyi.

Senator Payne has said she will continue to “press strongly for Professor Turnell’s release.”

Myanmar's November vote was only the second democratic election the country had seen since it emerged from the 49-year grip of military rule in 2011.