It comes after The Australian Electoral Commission said some COVID-positive voters may not be able to cast their ballot this federal election. 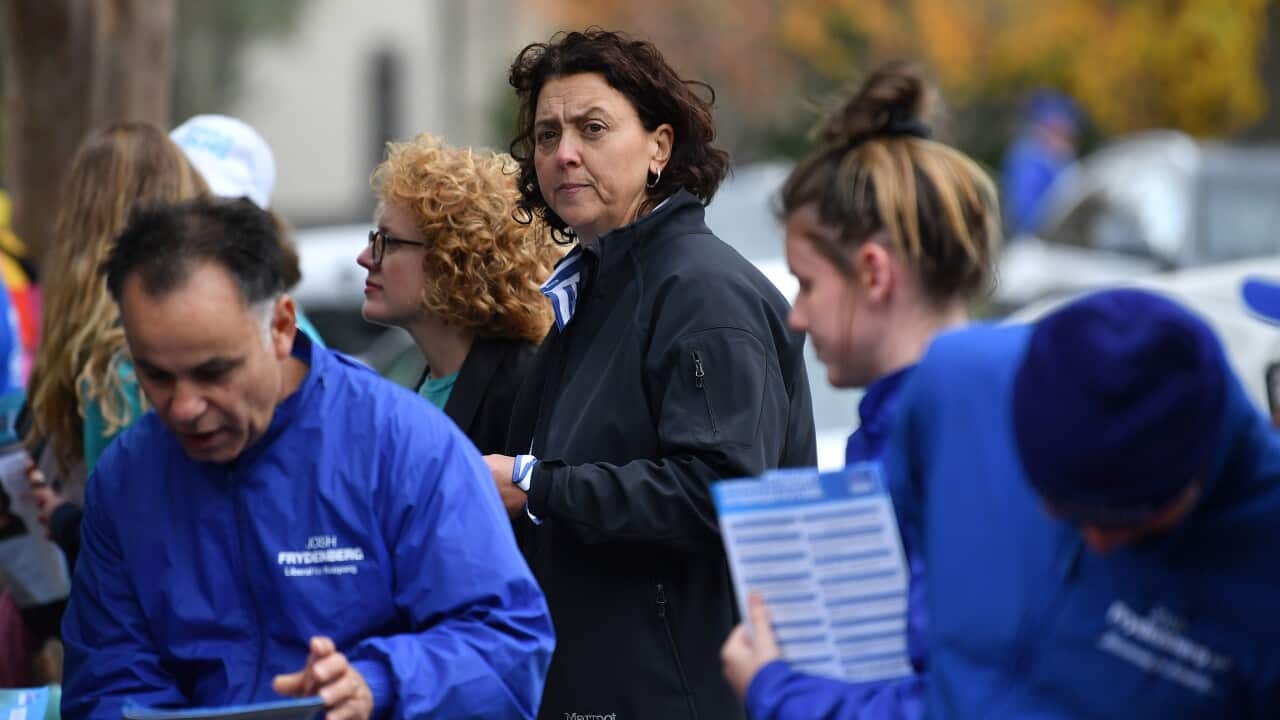 The independent candidate for Kooyong says she will lodge a legal challenge in the Federal Court on Friday after the Australia Electoral Commission (AEC) conceded some COVID-positive Australians may not be able to vote in Saturday's election.

"We're fighting to ensure up to 201,000 Australians with COVID can vote this election."

Advertisement
The announcement came hours after the AEC said on Thursday afternoon that some of the thousands of Australians who have tested positive for COVID-19 in recent days may not have their votes counted this federal election.
Legislation was passed this year to allow COVID-affected voters to cast a telephone vote.

However, telephone voting is only available for people who tested positive for the virus after 6pm on Tuesday.

Anyone who's tested positive since Saturday - meaning they will still be in their seven-day isolation period on election day - and before 6pm on Tuesday, who hasn't already voted at a pre-poll booth, is only eligible for postal voting.

But applications for that closed at 6pm on Wednesday, meaning those who did not register before the deadline will be unable to cast their vote by post.

"People who did not apply for a postal vote before the Wed 6pm application deadline, haven’t voted yet, tested positive before 6pm Tues, and are in isolation through to after election day, may not be able to vote," the AEC said on Twitter on Thursday afternoon.

Earlier on Thursday, Dr Ryan — who is challenging federal Treasurer Josh Frydenberg for the inner-east Melbourne seat — described the issue as "a major problem" and said she had heard from many people who were "very distressed".

She said according to official case numbers, at least 201,000 people across Australia tested positive for COVID-19 between Saturday and 6pm on Tuesday, "which is 1.2 per cent of the electoral roll".

"That’s enough to determine the result in many close races. There were eight electorates closer than that in 2019. Right now Kooyong looks that close too," Dr Ryan said in a tweet.

"The AEC says these people had a chance to apply for a postal vote. But postal vote applications closed last night. I think it's safe to assume that a great many people who were in their sick beds with COVID didn’t know about the postal vote deadline.

"I'm going to guess that young people, people who speak a different language at home, etc are VERY unlikely to have known about this."
The AEC's latest pre-poll data shows 5.04 million Australians have already voted in the federal election.

There are 17,228,900 Australians enrolled to vote.
More than five million Australians have already cast their vote in this year's federal election. Source: SBS News

The AEC is making progress in filing staff shortages after warning the issue could result in the closure of some regional polling stations.

It said on Wednesday that polling stations
in regional and remote parts of South Australia, Western Australia and Queensland
could be forced to close due to worker shortages ahead of Saturday's federal election.

Towns and communities in the federal electorates of Capricornia, Flynn, Kennedy and Leichhardt in Queensland, Barker and Grey in SA and Durack and O'Connor in WA could be impacted by shortages, it said.

But on Thursday, the AEC said that 5,000 additional people had signed up to work at polling stations in these areas of concern.
"The new registrations mean some of the locations we identified yesterday are no longer of critical concern but others are still falling short and, given the current environment, there could be new areas of concern arise," electoral commissioner Tom Rogers said.

"However, the impact will be limited. We will have the absolute vast majority of the 7,000 polling places we operate across the nation on election day open and operating as per usual."

On Wednesday, First Nations campaign director at advocacy group GetUp, Amy Gordon, said the closures would be tantamount to voter suppression in some of the electorates with the highest
Indigenous voters
in the country.

"Failure to have remote polling booths open for Election Day means that thousands of Blackfullas and people up in these electorates won't have their say on the election," the Goreng Goreng woman told NITV News.

Labor
released its policy costings on Thursday
, announcing its election commitments will add an extra $7.4 billion to the budget bottom line.

The Opposition's treasury spokesman Jim Chalmers and finance spokesperson Katy Gallagher said the party's commitments were "modest" and represented no more than an additional 0.4 per cent of the total budget in any year of the forward estimates.

"Our investments will generate an economic dividend ... every dollar of difference between us and the government is carefully calibrated to deliver a bigger economic return. To deal with these challenges that we would inherit ... we would be inheriting $1 trillion of debt, but we wouldn't be inheriting an economic plan from this government."

Labor's finance spokesperson Katy Gallagher said there were currently around 19,000 people in Australia on TPVs and SHEVs.

"This would abolish those visas and shift people on them to a new permanent visa," she told reporters in Canberra.

"It would remove the need to reapply and go through that process every three to five years, which is currently what's happening, and that is for people who have met the security and character requirements test under the current visa arrangements.

"Under the new visa subclass, it would allow the same support as under existing visas, so they would be entitled to work, access Medicare, income support, English-language tuition, and also things like trauma and torture counselling."

Some of that spending would be offset by increasing the Temporary Skilled Migration Income Threshold, which is currently capped at $53,900.

Scott Morrison has responded to his opponent Anthony Albanese, who criticised Liberal election ads for making "fun" of his name.

"I don't accept Anthony's accusation - at the last election we had a campaign that said 'the Bill you can't afford with Labor'," the prime minister said.

"In politics, if you can’t stump up and he’s quite happy to dish out criticism and abuse of me as he has done over the last three years I’m big enough to take that.

"If Mr Albanese is that precious and he can’t hack a campaign then how on earth is he going to handle running this country."
Mr Albanese said concerns had been raised with him by members of the Italian community about the ad as the rhyme relies on highlighting his last name, during an address to Club Marconi in Sydney on Wednesday night.

He on Thursday responded "no" when asked if the rhyme was racist, but repeated that a number of members of the Italian community had passed on their concerns.

If Labor forms government after the election, Mr Albanese would be the first non-Anglo-Celtic prime minister in Australia's history.

'He probably came off a little better': prime minister responds to collision with child

Mr said he had spoken with Luca Fauvette — the child he
accidentally knocked over during a campaign visit
to a local football club in Devonport on Wednesday night.

He said that Luca was in "great shape" after their collision and that he "probably came off a little better than I did because I hit the ground with a great thud".

"He shared with me his young sporting highlights. He told me he got three hat-tricks with a goal, he's got a story to tell his mates today and I suspect a yarn he'll be able to spin for many, many years to come," he said.

Former Wallabies captain David Pocock - who is also running as a candidate for the Senate in the ACT, also weighed in with his own tongue-in-cheek review of the incident.

"Shoulder contact to the head. No malice but off the ball and no attempt to drop his body height before the tackle. Red card. And we might be seeing him at the judiciary. Thoughts?," he tweeted.

At a press conference where Mr Morrison was criticising Labor's policy costings, including its plan to abolish temporary protection visas, the immigration minister was asked if
the Murugappan family
would be allowed to return to Biloela.

The prime minister first blocked Alex Hawke from answering, then said: "That matter is still undetermined in the courts and there's been no finding of protection for that family."

When asked whether the final say rests with Mr Hawke, Mr Morrison responded: "There is no protection owed. They've not been found to be refugees. And so Australia's rules do not permit permanent visas for people who have not been found to be refugees. That's the government's policy."
The Migration Act gives the immigration minister the power to grant visas due to unique or exceptional circumstances.

Pressure has been mounting on the government
during the election campaign to use those powers and allow the Murugappan family to return to the Queensland town of Biloela, where parents Priya and Nades had been living and working since 2014.

The family of four has been involved in a protracted legal battle to remain in Australia since 2018 when they were deported to Christmas Island after Priya's bridging visa expired.

They were held in detention on the island until 2021 when the youngest daughter, Tharnicaa, suffered from an urgent medical condition that required hospital treatment in Perth.

After Tharnicaa's release from hospital, her parents and older sister Kopika were given 12-month bridging visas, allowing them to return to Biloela.

But the four-year-old wasn't granted a visa, forcing the family to remain stuck in community detention in Perth.

Angela Fredericks of the Home to Bilo campaign said in the statement that Mr Morrison had "responded with a lie, repeating misinformation that 'that matter is still undetermined in the courts'."

"There is nothing before the courts. Mr Morrison is incorrect ... The Prime Minister’s claim that visas cannot be granted to the family without a finding of protection is also completely false."
READ MORE
'No protection owed' to Biloela's Murugappan family, Scott Morrison says, as Labor outlines policy costings

One Nation leader Pauline Hanson is off the federal election campaign trail after contracting COVID-19.

The diagnosis means the Queensland senator cannot campaign in person and will be in isolation on election day on Saturday.

Senator Hanson confirmed she was not vaccinated against the virus.

While many think the Omicron wave of the virus has passed, the health data gathered by a union reveals 596 aged care facilities have recorded at least one COVID death this year.