Telephone voting will now be available to some COVID-positive Australians who had been locked out, with the AEC also confirming dozens of polling stations that it warned could be forced to close due to staff shortages will open. 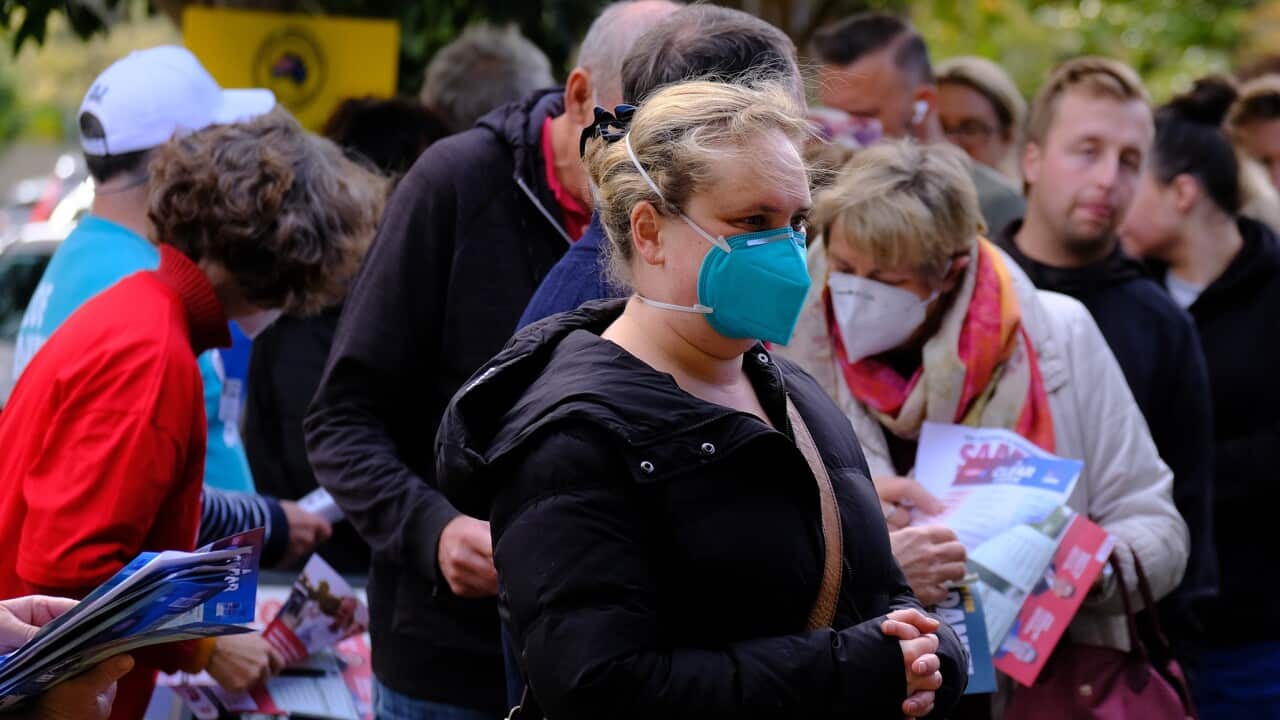 On Friday morning, the federal government said it had accepted a recommendation from the AEC to expand the eligibility of telephone voting. Source: AAP / LUIS ASCUI/AAPIMAGE

The Australian Electoral Commission (AEC) has confirmed the eligibility for telephone voting has formally changed to allow people who tested positive for COVID-19 from 6pm Friday 13 May to use the service.

Legislation was passed this year to allow for COVID-affected Australians to vote in the federal election over the phone, but it only applied to those who'd tested positive for the virus after 6pm on Tuesday 17 May.

The AEC conceded on Thursday afternoon that
thousands of Australians who tested positive after the cut-off
to apply for a postal ballot but too soon to qualify for telephone voting could miss out on having their say.
Advertisement

Just tested positive for COVID-19 and need to vote? Here's how

On Friday morning, the federal government said it had accepted a recommendation from the AEC to expand the eligibility of telephone voting.

By late afternoon, electoral commissioner Tom Rogers had confirmed that every Australian who had tested positive to COVID-19 after 6pm on 13 May would be allowed to cast their vote over the phone.

"We heard from community members who did not apply for a postal vote before the deadline, we acted to extend the phone voting service and all COVID+ voters can vote in the election," he said in a statement.
Independent candidate Monique Ryan -
who had lodged a court application seeking to challenge the legality of the AEC regulation
- said on Friday afternoon that one of the plaintiffs in the case, Jemma Smith, had successfully registered to vote by phone.

"We shouldn't have to sue our government to ensure that everyone with COVID can vote," Dr Ryan, who is running against Treasurer Josh Frydenberg in the Melbourne electorate of Kooyong, tweeted.

"Throughout this sorry episode, Josh Frydenberg has remained silent about the disenfranchisement of voters with COVID.

"As your independent, I will always advocate for the rights of our community."
Earlier, Dr Ryan pledged to continue to pursue legal action until emergency measures to fix the problem were in place.

She had set up a crowdfunding campaign to cover the costs of the challenge, which attracted donations from 1,364 people.

"I'll give donors the choice to receive a refund of unspent funds or donate to a charitable legal advocacy fund," Dr Ryan wrote in a tweet on Friday afternoon.

Dr Ryan claimed the AEC changing its mind on phone voting was a win for independents, but Liberal MP and Special Minister of State Ben Morton, who the legal action was taken against in his capacity overseeing electoral matters, said otherwise.

As Australians head to the polls, these are the seats that could decide the federal election

"Any suggestion this is a response to a teal independent in Melbourne is wrong - this is something the government has been working through," Mr Morton said.

"This is an issue that I have been raising with the election commissioner in the last 48 hours."

Mr Morton said that it was important that every Australian who is enrolled and entitled to vote can "exercise their democratic right and this change ensures that".

Australian Electoral Commissioner Tom Rogers said telephone voting was a two-step process that involved getting a registration number and then calling in to vote.

He urged people using the service to be prepared when they called and to expect delays because staff could be "effectively reading out the ballot paper".

"If people need the entire ballot paper read out, there will be queues, but it will ensure everyone can vote," Mr Rogers told the ABC.

The AEC also confirmed on Friday that all 76 regional polling places it has identified as being in danger of not opening due to staff shortages had now recruited enough workers.

It had warned on Wednesday that towns and communities in the federal electorates of Capricornia, Flynn, Kennedy and Leichhardt in Queensland, Barker and Grey in SA and Durack and O'Connor in WA could be impacted by the shortages.

Advocacy group GetUp said the potential closure of booths in electorates with some of the highest rates of Indigenous voters in the country was tantamount to "voter suppression".
Mr Rogers said the effort over the past few days to be able to ensure all booths can open had been "mammoth".

"We cannot thank people enough – our colleagues across government and the community have stepped up to lend a hand, and Australians have stepped forward for democracy," he said in a statement on Friday evening.

But Mr Rogers warned that it being "a pandemic election" meant there could still be COVID-related staff shortages at booths on Saturday.

"Our 105,000 workforce across Australia has had approximately 15 per cent turnover in the past week alone and this risk will continue tomorrow morning," he said.

"If some of the small number of people we've lined up to work at a local voting centre withdraw on the morning of the election, we may not have back ups available in that town.

"To voters, if there is a queue remember to treat our staff with kindness. You wouldn’t have a local polling place with them."

More than 4.6 million people across Australia had voted via pre-poll by Thursday night, according to the AEC.

It said Thursday was the biggest single day of early voting in Australia’s history, with 743,000 cast, and tipped Friday to again break that record.

Former prime minister Julia Gillard has told Australian women to vote for Labor, saying a government under Anthony Albanese will be a "government for women".

"I’ve got a particular message for Australian women, having served as the only woman to hold the job as prime minister," Ms Gillard said.

"You would know in the years since that I’ve made my focus [on] women’s leadership, amongst the biggest things that I do. What I want to see for this country is a government that cares about, values and includes women. And I know that a government led by Albo will do precisely that.

"So Australian women, if you want to make a better choice, please, tomorrow, go to your ballot places, go to your polling stations and vote Labor and vote for Albo to the prime minister.

"I am very confident it will be a government for women."
Mr Albanese said he feels a great responsibility to be successful in changing the government, and criticised Prime Minister Scott Morrison for how he handled the COVID-19 pandemic, bushfires and floods.

"When it came to the pandemic, he said it wasn’t a race to order enough vaccines and there was a worse health and economic outcomes as a result," Mr Albanese said.

"And didn’t even learn those lessons in terms of the rapid antigen tests that we have a government whereby it never learns from mistakes of the past. It struggles with the present and has no plan for the future.
"We actually need to do is to change the government. This prime minister a couple of weeks ago said he wanted to change."

Ms Gillard was asked if she had any advice for the Labor leader.

"Honestly, he's campaigning magnificently so he doesn't need my advice," she said.

She had the same response when asked if she had any pointers for Mr Albanese in the potential situation of a hung parliament.

"Our objective is 76 [seats]," Mr Albanese said.
Mr Albanese and Ms Gillard reminisced about old times over a coffee in the Liberal-held seat of Sturt, discussing their first meeting when Mr Albanese was 18 years old and Ms Gillard was 21, and their shared interest in education equality.

They also discussed how Ms Gillard had kicked off the cavoodle trend, with many politicians now owning that breed of dog, including Mr Albanese.

Mr Albanese backed former prime minister Kevin Rudd in a leadership spill in 2012 when Julia Gillard was the prime minister. Shortly after he announced his support for Mr Rudd, Mr Albanese offered his resignation as the then Leader of the House of Representatives.

"Albo is a great Labor man with a great Labor heart ... I refused to accept his resignation ... I can't imagine a government I lead without Anthony Albanese in there beside me," she said at the time.

"I'm not even confirming there's a leak. So you shouldn't jump to conclusions about these things. I know what the reports are, but I don't discuss national security matters," Mr Morrison said.

"The reason I don't do that, and play the game of saying yes or no to these questions, I don't confirm or deny any issues raised around national security.
"That's what a prudent prime minister does in managing the sensitive issues of national security. Now, what we've done as a government is - this year alone, $2.7 billion invested in our Pacific family.

"We are by far and away the single largest overseas development assistance partner of the Pacific family."

The Australian newspaper's report on the national security leak implies that further funding to the region might have prevented Solomon Islands' security pact with China.

When asked about whether he would use his government's discretionary powers to allow the Murugappan family to return to Biloela, Mr Morrison said that his priority was keeping Australian borders "secure".

"The most empathetic thing when it comes to border protection, is keeping our borders secure. I have been lectured by people over my entire political career about this issue. What I know is, what I did in 2013, with Tony Abbott, is put an end to the carnage.

"We got all the children out of detention centres."

Mr Morrison on Fridaydenounced a conspiracy theory produced by the United Australia Party (UAP) this morning on 2GB Radio.

The UAP ran full-page printed advertisements on Thursday claiming that Labor and the Coalition —the major forces the anti-establishment UAP campaigns against — were planning to sign over Australia's health assets to the World Health Organization (WHO).

It propagated that China was controlling the WHO and that Australia would be subject to enforced lockdowns ordered from China and be vulnerable to having its health assets, like hospitals, seized.

The conspiracy theory, which has also been spread in the US by senator Marco Rubio, is based on the WHO's plan to discuss a pandemic treaty at the 75th World Health Assembly on 22 May.

"There has been this thing going on about some WHO treaty, I hear the United Australia party has been going on about it. It’s complete rubbish," the prime minister told 2GB Radio.

"There is no treaty that we’re signing up to.

"I would never do that. I’ve rejected United Nations treaties that have tried to interfere in Australia’s sovereignty on immigration before and I certainly wouldn’t allow it in terms of how public health is run in this country.

"But you know what happens before an election, people put all sorts of rubbish out there to try and confuse people."
Share
11 min read
Published 20 May 2022 at 1:53pm, updated 20 May 2022 at 8:53pm
By Tom Stayner, Tom Canetti, Amy Hall
Source: SBS News
Tags
Australia